Riko sees a message left by her mother that reads “At the netherworld’s bottom, I’ll be waiting”, and instantaneously assumes it’s for her. She decides that now is the time for her to get out of the confines of the orphanage and deep dive into the Abyss. The other kids support her, but Nat is strongly against it. After all, this will likely be the last time Riko sees any of them ever again.

I don’t know that I was prepared for the story to move this fast and for it to be this emotional. Made in Abyss has this unnatural way of framing very dark subjects in side dialogue and this whole episode gives me this sickening Madoka Magica vibe. Nothing is ever going to go well…is it…?

Episode 3 is surprisingly laid back for the dark content and game changing story beats that it brings to light. Riko is happy as a clam, and excited that her mother left her a message to meet her at the bottom of the Abyss. To piggyback off of Dan (cause that’s the trend we are going for, right?), it really helps that the cast are all children. If the cast was a group of adults I don’t even think the decision to venture into the Abyss would be possible. It’s also the setup for what I feel is a deep tragedy. The naivete of children is something that Japan loves to bend to the point of breaking. 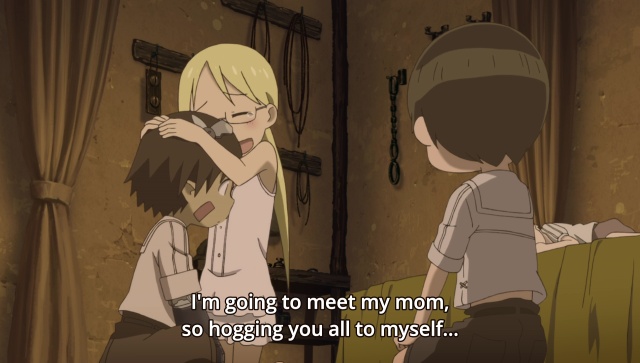 Riko’s nonsensical optimism aside, the hero (and minor butthead) of this episode is Nat. As I stated in the synopsis, Nat seems to be the only voice of reason among Riko’s friends. Despite acting like a butt in the beginning of the episode, he is the gravitas for us the viewers as we remind ourselves that Riko is not just setting out on a normal heroine journey. There’s a sequence where we are talked through the map of the Abyss and each new horror described leads me to believe these kids are never going to make it out of this.

It’s also important to note that this episode adds a layer to the mystery of what Reg is and why he was made.  He’s clearly part human as he possesses human anatomy and thought that isn’t robotic in nature.  He also was something that Lyza took note of in the Abyss and her discussions about him don’t match up with the seemingly innocent Reg we have come to know.  I like that the show is layering all this in, and having Reg contemplate his existance is a an obvious choice for why he would accompany Riko in the Abyss. 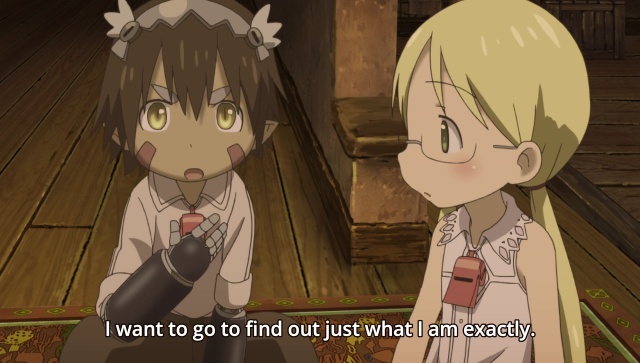 I’ll stick my negative comments in the middle here, because there was really only one. When Reg decides to go with Riko down into the Abyss, he sneaks off at night to say good by to little Kiyui. This gets him caught by Leader and he makes up a lie about being up to check on Riko, who he claims in having intense diarrhea. I’m not sure if this sequence is supposed to be funny, but…it isn’t. It’s also so obviously a ploy so when Leader believes it and sends Reg on his way, you are left saying, “Why did you even animate that encounter in the first place??”. Also, how does Leader not catch on that Reg is lying?

To tie back to the line I wrote up above about side dialogue, I’ll end with the fact that the leadup to Riko and Reg leaving for their adventure is heartbreaking. The Abyss is heavily guarded due to the fact that illegal artifact raiding has been known to occur. It is in this episode that we learn about the Wharf. Riko and Reg need to sneak into the Abyss from a less…savory location to avoid detection, so Shiggy tells them to meet him late at night. Nat appears and takes the gang through the Wharf, revealing that he was born there and left alone after his sister died. As we walk through the Wharf with him we learn that it’s basically a hive structured slum for those not able to live in the countryside. It’s all told through Nat’s calm voice stating things like, “If I hadn’t been picked up, I would have just died of disease or starvation..like most of the kids around here”. Through this simple set of words we see a whole new world open. 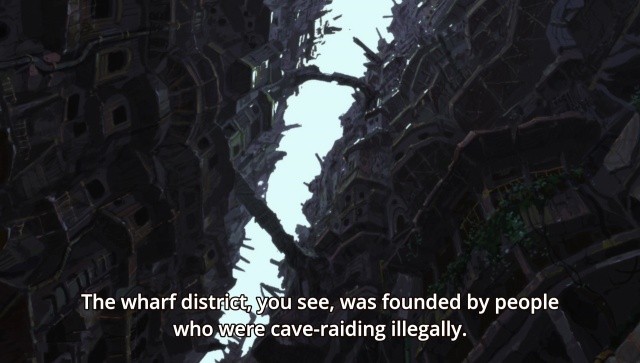 The finale of this episode has Nat unable to stutter out how sad he is to see Riko go. Riko finally breaks down and cries, telling him that even if she never makes it back, they will always be connected by the Abyss, because those who are lost leave their voices behind to guide those who venture in. I have the worst feeling about this and everything in this scene made ME almost cry. Hang in there kids…

As with the previous 2 episodes, everything in this show is beautiful to look at. Each shot could be a poster in your house. The sequence with the map blew my mind as it harkened back to Seirei no Moribito where animators poured so much love into 2 second shots.

With gorgeous art and strong world building I highly recommend getting into this show. Just..be prepared for tragedy because my female instincts tell me there’s a storm a comin’.