Riko and her friends manage to get Reg accepted into their orphanage, and for a time, life continues as normal. After three months, a cave-diving expedition returns to Orth with much fanfare, bearing a white whistle; the mark of the bravest and most accomplished adventurers. The whistle belonged to Riko’s mother, Lyza, and its sudden return causes mixed feelings in the young girl. It also appears that the whistle was not the only thing Lyza brought back from the Abyss…

To shamelessly piggyback off of Brendan; boy howdy, folks! Made in Abyss is flat-out, full-stop gorgeous. Its visual design is immaculate, and its worldbuilding is phenomenal so far. This episode is largely dedicated to stepping back from adventuring and letting the audience take in the everyday life of Riko, Reg and their friends in Orth, as well as explaining many of the concepts that were introduced in episode 1. It’s heavily loaded with exposition, but it’s all handled so well that I don’t mind the show being front-loaded like this.

Part of what helps is that the majority of the cast are children, so we learn much of how the Abyss works from their perspective. Whether it’s the adorable pictures detailing the increasingly worrisome effects of the Abyss…

Or a children’s pantomime about the ranks of cave-divers… 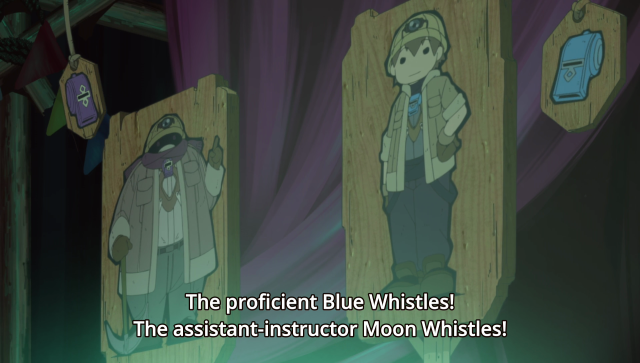 We learn essentially everything we need to know about how Orth’s adventuring hierarchy works and why the Abyss is so tantalizing and dangerous. The city treats it not as a terrifying chasm of death (though they certainly don’t ignore its dangers), but as a place of opportunity. Those who plumb its depths are lionized – the return of Lyza’s whistle is a cause for celebration, rather than mourning.

This brings out a lot of uncertainty in Riko, who has long idolized her mother, but never knew her. Leader’s (real name still unknown) description of her is both admiring and admonishing, painting the picture of a fascinating person. It’s nice to see a deceased family member described with depth and complexity, rather than just a trigger to move the plot forward.

That’s not to say Lyza doesn’t accomplish that as well in absentia. Her findings look like they’re going to be driving much of the story in the near future, so I appreciate that the show took the time to get us settled in before tossing us in the deep end. Heck, a full three months passed since Reg was admitted to the orphanage, so it’s clear that Made in Abyss is willing to keep things paced out. It makes the world feel more believable without depriving us of its delicious story-meats.

If there is one thing that bugs me a little about the show, it’s some of the humor derived from examining Reg. We’ve already established that Riko’s tests on his body were pretty extreme, but from what she says in the first part of this episode, they also got… invasive. You can probably chalk it up to compulsive childish curiosity and cultural distance, but it made me a bit uncomfortable. So far, however, it’s nothing that’s going to drag down an otherwise brilliant show.

There is so much more I’d love to say about this show, but I feel it really needs to speak for itself. It’s a visual delight to watch, its characters are fun, clever and engaging, and its world continues to fascinate me. It captures the feel of an old-school adventure RPG without blatantly copying the terminology like many game-inspired anime seem to these days, and that’s something I’m quickly growing fond of. I’m beyond excited to see where Made In Abyss takes us next as we dive deeper into its mysteries.