Long ago, the city of Orth was built around a mysterious opening in the Earth. No explorer who has ever returned to the surface has seen the extent of its depths, but expeditions continue to yield valuable artifacts. Novice spelunker Riko seeks to follow in her lost mother’s footsteps, but must first rise through the ranks at her orphanage. On her first solo delve, she comes across an unconscious cybernetic boy, and proceeds to sneak him back to her home while attempting to keep him secret from the orphanage administrators.

Boy howdy, folks, I think we’ve caught ourselves another good one. This episode is a phenomenal introduction to a beautifully rendered fantasy world. Pretty much every aspect of this show struck a chord for me, so let me go down the line. 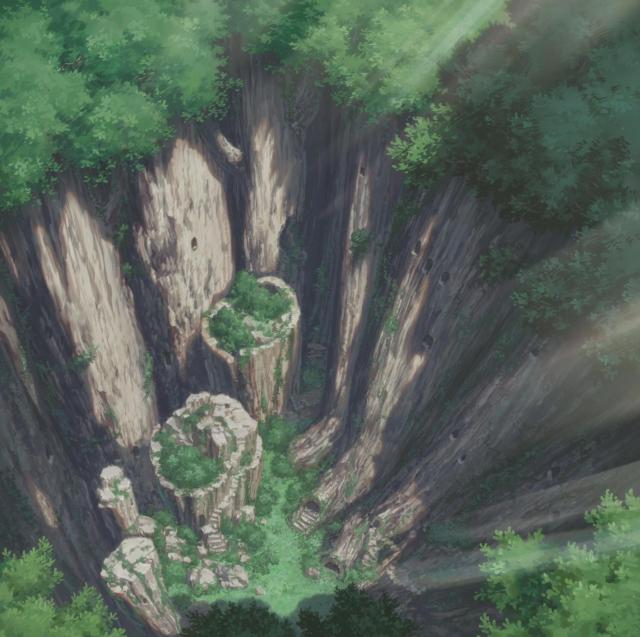 The setting is gorgeous. There’s a hint of melancholy in the air everywhere we go, from the petrified trees 100 meters down to the sleepy shots of Orth itself. One might expect a place like this to be a bustling haunt of RPG-style adventuring parties (MMO or otherwise) picking up legendary super-weapons with which to fight God or whatever, but so far there’s a much more intimate feel to the place. I was reminded of games like Terraria (where drilling through underground ecosystems and finding creepy relics is core gameplay), Risk of Rain (a game built around moving through surprisingly vertical alien landscapes, hunting for debris from your wrecked spacecraft, and shooting up the incredibly dangerous local fauna), and Cave Story (which, uhh… just play Cave Story).

The BGM is sparse so far but I’ve no complaints with it, nor with the ending theme. I’m especially intrigued by the opening theme, which seems to be in full English and has some cool sort of arrhythmic bits in it. 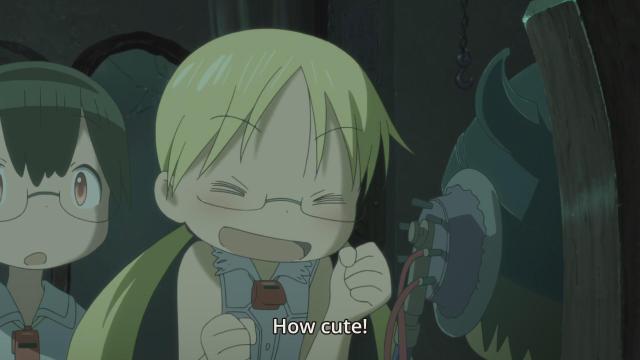 I’ve got something of a soft spot for puni plush character designs (pun intended), so I think the kids are adorable. The adults we meet are appropriately stylized without being excessively detailed.

In addition to being well-designed – and well-animated – everyone’s personalities are conveyed well and everyone is pretty likeable. The Director functions as the primary antagonist that doesn’t come from a bottomless pit, and this is due mostly to an extreme punishment once dealt to Riko and the subsequent fear of how exactly the rest of her idea of discipline is calibrated. Conversely, Riko’s childish enthusiasm is infectious, and one gets the sense that most of her associates put up with her reckless behavior because she, and they, are genuinely good people. 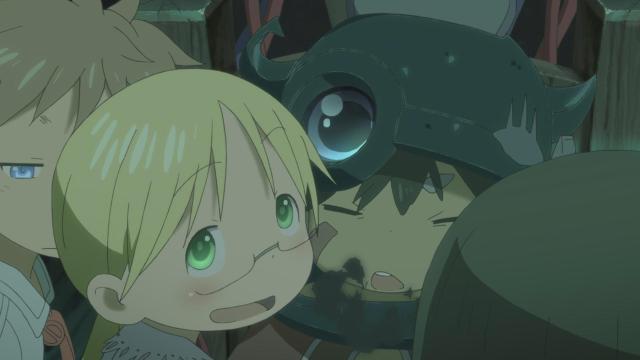 The show regularly tosses in bits of levity in the form of quick gags. These are especially welcome in the light of chatter that I’ve seen online suggesting that the show is fated to become a soul-crushing sob-fest, presumably to accurately adapt its source material (which I haven’t read). Unfortunate things happening to cute anime girls is not a new thing, though – nor is it something that I’m generally averse to (though it is certainly possible to overdo).

It may be a long way down before we reach the bottom of Made in Abyss, but it looks from here like a trip I’d like to take.