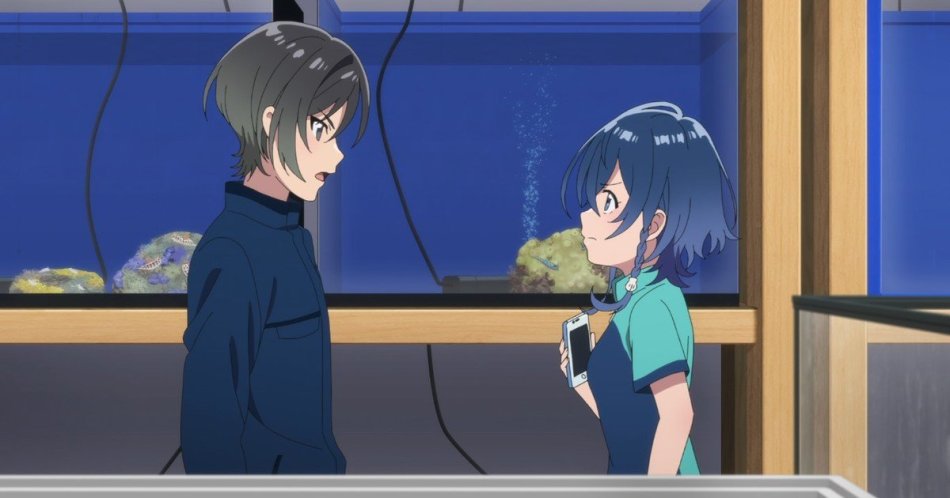 Kukuru continues to struggle under the demands of her manager in the marketing department. Tasked to quickly come up with a new presentation, she proposes an exhibit on the beautiful and varied species of sea slugs that live in the nearby shallows. She gets so wrapped up in the exhibit that she’s late to another presentation, doing no favors to her relationship with Chiyu. She also spars with the caretaker, Kaoru over the aquarium’s responsibilities to the animals under their care and their visitors.

Much like the last episode, this one asks us to sympathize with Kukuru as she tries to meet the unreasonable demands of Suwa, the harsh marketing manager. Thanks to some encouragement from Fuuka, she’s much more excited about this one because she gets to choose a subject near and dear to her heart; the noble sea slug.

It’s great to see Kukuru’s passion shining through despite being stuck in a role that she never wanted. Despite her lack of experience in the field, she did manage to organize several successful events back at Gama-Gama, and her love for the subject matter always brings out the best in those she works with. If you’re ever watching a movie or participating in an event, it’s always clear when the people behind it are passionate about what they’re doing. Care for the subject matter and verge always take these things to the next level.

Of course, things don’t work out quite as well as Kukuru would hope. Her manager makes even more demands, forcing her to hunt for more sea slug species with limited time and resources. Like many aquatic creatures, these critters are tough to take care of in captivity, and the ones she finds don’t seem to be eating.

Luckily, Tingaara has many experienced staff members, and the fish caretaker Kaoru may be able to help. However, she’s been struggling with the laid back attitude brought in by the folks from Gama-Gama, since it goes against her very professional manner. Despite that, Kuya seems to get along well with her… right up until he realizes she’s a woman.

I don’t know what it is about this show, but these forced affects are starting to bother me. The worst offenders by far are Kuya with his weird female allergy, and Higa with his constant fish puns. I don’t find either of them funny or endearing, and they just tank any scene they come up in, and we have to deal with both in this episode.

Fortunately those moments are relatively brief and we get back to Kukuru and Kaoru. There’s a brief, odd conflict between the two over what the purpose of an aquarium is and whether its cruelty (because what else can you call caging an animal for its entire life) is worth the gains for humanity and nature. To be honest, I’m struggling to understand what their argument is over, because they both seem to value the lives of the animals and the impact they have on the visitors more or less equally. Perhaps there’s something being lost in translation, because their confrontation felt very forced and muddy to me.

Regardless, the two both share a passion for ocean life and nature in general. Kaoru makes a strong point that the main purpose of an aquarium is preservation of nature in general, rather than just the species in their care. By interacting with these creatures and habitats face to face, people gain a greater appreciation for them than they ever would just seeing them on TV or reading about them in books. It’s good to see the show continue its strong environmentalist messaging and supporting it with gorgeous art of the underwater animals and environments.