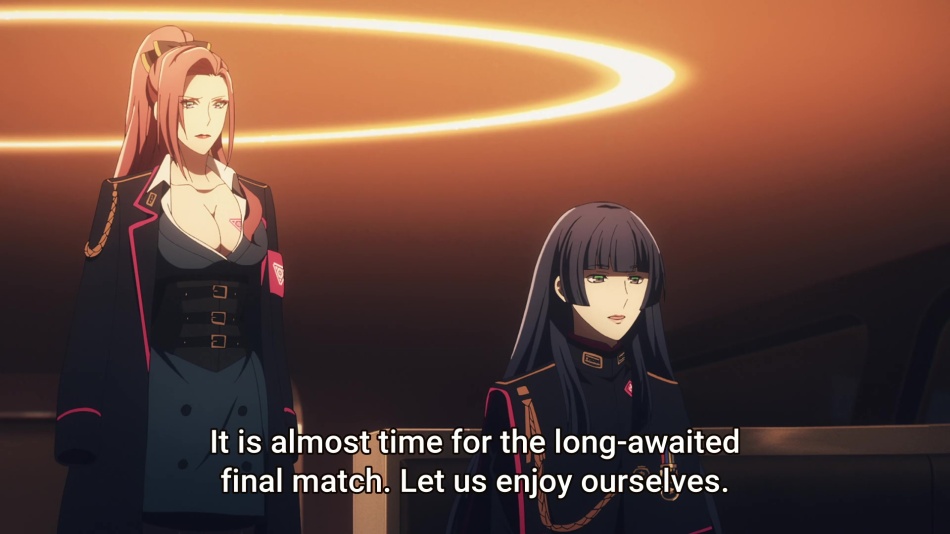 Folks, this is the big one.  We’ve been building up to the final confrontation between MAD TRIGGER CREW and Matenrou, and this episode does not disappoint.

With the first half of the episode focused on some interesting dynamics between Jakurai and Samatoki, this leaves the second half for a non-stop back and forth rap battle filled with the show’s trademark bananas imagery.

In short, if you…

…ugh, FINE.  I GUESS I can get back to the review I’m supPOSED to be doing.

But I’m doing it under protest, because, in contrast to the always-incredible Hypnosis Mic Division Rap Battle – Rhyme Anima, Majo no Tabitabi had what is easily its worst episode.  As anticipated from the last episode, Elaina arrives at the same town that Nike came to 20 years ago.

Coincidentally, the Curio Company is out of prison and getting ready to do some crimes.

As Saya now has a job to bring back the box that Nike and her apprentices left with 20 years ago, the Curio Company plan is now reliant on intercepting the box and opening it.  Before I move on, I am just super confused about this whole plot.  Why did Nike take the box?  Why did it languish for 20 years at some other location?  Why is there a job to take the box back?  Did the Curio Company infiltrate the United Magic Association and create a fake job?  But Saya was told not to open the box, so that can’t be it.  Why go to so much trouble to show us the box moving around?  Just have the Curio Company have the box when they get out of jail.  After all, they get out of jail and have a magical body-swapping blowgun at their disposal, so there’s no reason they can’t also have the box.

Anyway, their plan involves using that magical blowgun to body-swap two targets in the hope that the person now in Saya’s body decides, out of curiosity, to open the box.  Instead of, y’know, just opening it themselves.

Naturally, this leads to Elaina being the randomly chosen person to switch bodies with Saya, and naturally, she immediately opens the box.  A cloud of, no joke, aphrodisiac/love potion gas pours out and covers the town, allowing the Curio Company’s gas-masked members to do some crimes.

So as long as there’s no shred of intelligence or goodwill left, why not have Saya’s sister Mina also appear and immediately try to rape her?

Thankfully, Elaina is in Saya’s body, knocks her out, and eventually takes down the Curio Company, but the damage is done.

For the rest of the episode, everyone teases Mina about her attempted rape, like “oh, sisters will be sisters”.

I just… I just hate all of this so much.  This show is trash, and I am filled with loathing towards it.

2 comments on “Rolling Review – Wandering Witch: The Journey of Elaina (11)”