As the Tohru and the Somas prepare for their last evening at the beach house, Akito has finally had enough of the girl’s meddling. In a violent confrontation, it becomes clear that there is one person above the rest of the zodiac that is essential ‘God’ to the rest; and that person is Akito. Despite reeling from this and what Akito plans to do with the rest of the Somas, Tohru shores up her determination to protect them, even if it means confronting the curse hovering over the entire zodiac.

I found myself with many of the same questions Su raised in her most recent episode review, and it finally looks like we’re getting some explanation of what Akito’s whole deal is. Despite having watched the show many years ago and being familiar with the broad strokes, I couldn’t recall any details of the curse or Akito’s hold over the rest of the Soma family, so it was driving me up the wall trying to figure out why no one had stood up against the abuse heaped upon them.

Obviously, victims of abuse respond in many different ways, and charismatic or manipulative abusers are able to trick those they hurt into acting against their best interests. Akito, however, is not a particularly skilled manipulator nor charming enough to gaslight anyone, so I was frustrated and confused that no one, not even the adult zodiac members, had done anything about it. Now that we know that Akito is essentially a divine presence that the others have little ability to resist or disobey, it’s all starting to make sense. 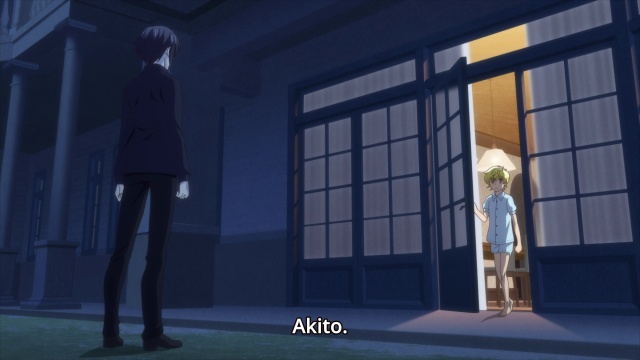 This makes the events of this episode doubly tragic and infuriating, as Momiji finally stands up to Akito, only to be beaten down. Tohru throws herself in the way and gets her cheek sliced up for her trouble. This is the version of Tohru I respect; someone who stands up for others in spite of their own meekness and fear. It’s the version of her that clung to Kyo in spite of his violence and rage because she knew he was worth saving. It’s a powerful moment, and a far cry from the airheaded ditz she’s been portrayed as for most of the recent episodes. 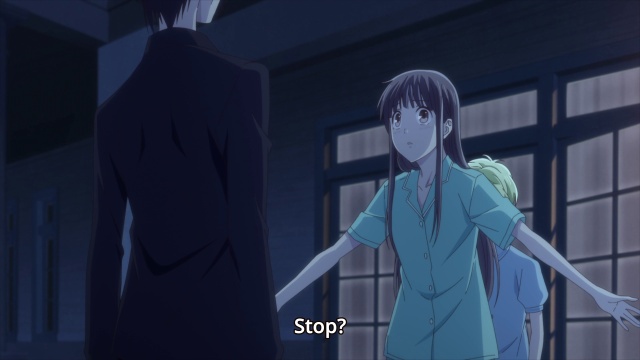 The confrontation between Akito and Tohru has been a long time coming, and it’s as impactful as we could hope for. The combination of tightly focused close-ups and the focus on Akito’s face and hands make the entire scene tense and unpredictable. We know what’s happened to others who interfered with Akito’s little “banquet”, and the fear of violence hangs oppressively over the whole exchange.

There really isn’t much else to say about the episode, since it orbits entirely around this meeting and the revelation of Akito’s status as the master of the zodiac in more than just name. It sets us on the path for Tohru to finally confront the nightmare that her friends live within, and for them to unite in resistance or resign themselves to Akito’s control for the rest of their lives. 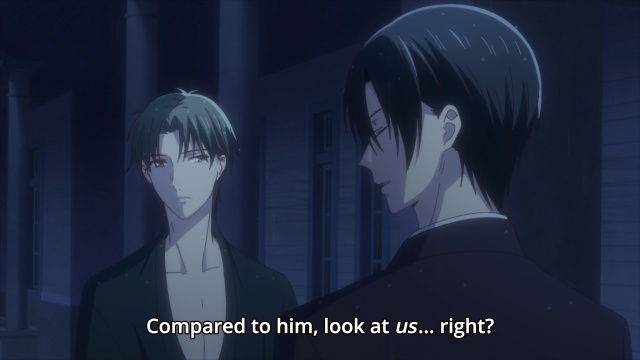 Episode 10 is a powerful, darkly enthralling turning point in the show, and after so much time getting to know everyone involved, it lands excellently. While I’m still frustrated by the inability or unwillingness of the other zodiac members (especially Shigure and Hatori) to stand up to Akito, I’m glad that we’ve at least confirmed that there’s more to it than meets the eye.

In the meantime, I have a suggestion for Tohru. It’s clear that your Soma friends can’t stand up to or fight Akito, but do you know who else you have in your corner? Two young ladies that are willing and able to absolutely destroy someone who threatens you. Let’s see the look on Akito’s smug face when Saki and Arisa jump out from the back of a van and start laying in. That’s the surprise conclusion I’m crossing my fingers for!