The crew gets organized as a club and is granted a space to work in.  There, they discuss the things they’d want to do in creating an anime, though they don’t get far before they realize they’ll need equipment.  Fortunately, a long-ago animation club left behind a complete set of early animating tools, as well as some half-finished cels and layouts.  The girls decide on a modest first project – improving on one of these half-finished layouts, a rotating windmill.  They’re able to make a good show of it, and seem ready to take on a larger project… though their clubroom will probably need some repairs first.

Based on this episode and the previous one, it looks like the show will, at any given moment, be in one of three “modes” – the plot itself, short educational lessons on how animation is made and the techniques used, and delightful “flights of fancy”, where the characters race through a half-animated world, making things up as they go along and having them be brought to life as soon as they’re thought of.  I’m hugely enjoying the show, and all three parts of this episode hold my rapt attention.

On the plot side, I really appreciate that the show spends minimal time on the preliminaries – no finding another club member, or having to make long entreaties to the teachers – they want to make a club and within about 2 minutes, they have a clubroom.

This is in no small part to their enigmatic new club adviser.

He shows up out of nowhere, grants them a clubroom, and then walks away without a second thought.  I’m not sure what future role he’ll play, but I already like his approach to this new club, which appears to be “get the kids the basics and stay out of the way”.

I also enjoyed the interplay between the characters.  Asakusa and Mizusaki are happily and hyperactively imagining what their clubroom studio will look like, and all the different (and expensive) animation techniques they want to employ in whatever they end up making. 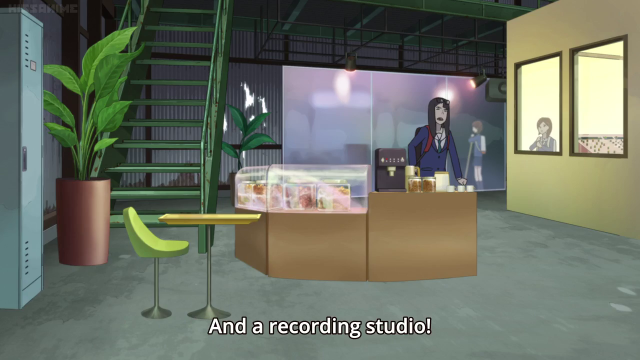 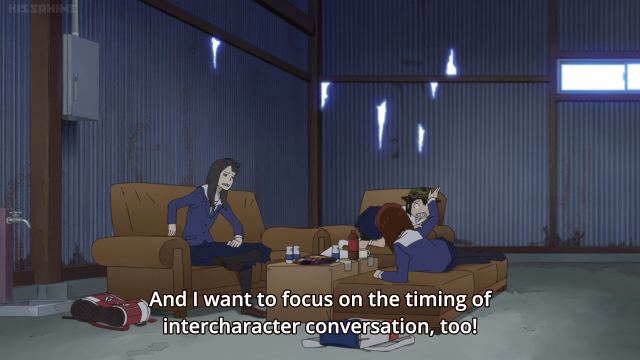 Thankfully, Kanamori is there to keep them grounded, both by asking purposeful questions that get things back on track (“what do we need in order to make animation?”) and keeping her thoughts on the financial side of things (given that their club has no budget and owns an empty tin shack).

On the animation lesson side of things, once the crew discovers the old animation equipment, we’re treated to some detailed explanations on how early anime was made. 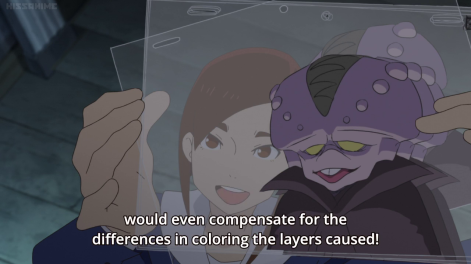 It’s very neat stuff, and a lot of it highlights how early animation was often about overcoming numerous technical limitations and compromises to produce something watchable.

On the flights of fancy side, today sees our intrepid group of helmet-wearing heroes getting some wind for their windmill – by any means necessary.

These sequences don’t necessarily make sense as a narrative except in the loosest way, but they instead feel like watching people collaborate on something in real time.  You can practically hear the characters saying “oh, but what if that caused everything to flood, and we needed a boat, and then the boat could FLY!” as things go along. 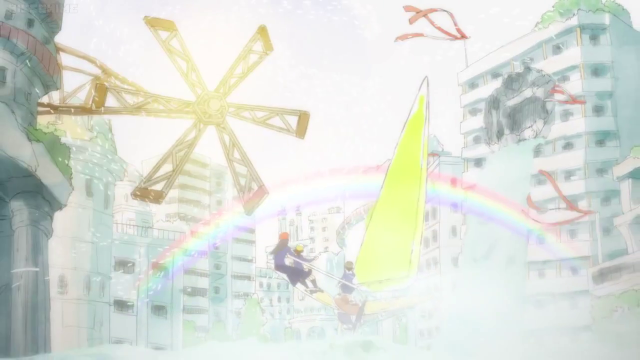 It also gives the sense that the characters have just a ton of different ideas, changing too fast to even pin down, which must be a feeling a lot of animators have had.  It’s gotta be hard to calm down from throwing out cool ideas and concepts long enough to actually settle on a single plan and do the long, slow process of animating them.  Here’s hoping this team of three can do just that – I’m counting on you, Kanamori!