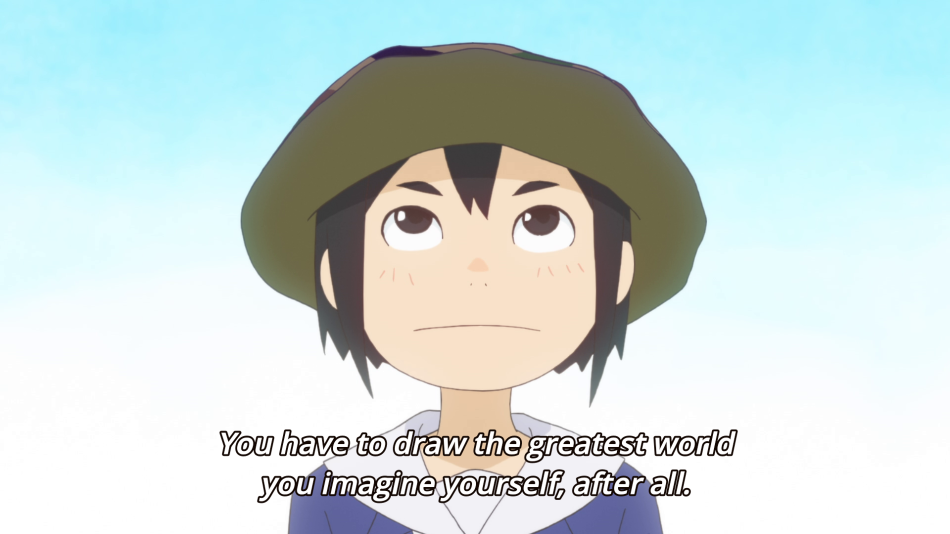 The Eizouken Club hosts meetings with each of the members or clubs who are helping bring the anime together.  Despite some hiccups, sound, background design and the animation itself are sloooooowly coming together.  Due to a heavy rainstorm the girls find themselves in the bath house.  Mizusaki discusses how her parents generally leave her unleashed and surprised by Asakusa’s family feeling the need to know where she is.  On the offbeat of the episode, we learn a bit about Mizusaki’s childhood and her love of animation.

In the same way Dan connected personally with Episode 4, I feel that Episode 7 speaks directly to me.

Episode 7 keeps the normal dose of humor as each club/person checks in with Our Glorious Leader Kanamori.  Each of these pieces is choc-fullo dialog that you are going to want to read more thoroughly on a second watch.  Doumeki disusses how it is important to understand a scene and all the dialogue that goes along with it.  There’s sound even in the most mundane moments of a show, and it’s easy to forget that unlike a still shot in a movie, there isn’t organic ambient noise that will fill the scene.  The Sound Director needs to be cognizant of filling in sound to make viewers feel immersed.  Dialogue is also rather tricky.  It’s like an acrobatic feat where each piece must line up perfectly with the next.  Once again, Eizouken doesn’t skimp on the details when discussing the little things that make up anime.

At least the cast for this anime is going to be amazing.

Though I’m disappointed they canned the theme song (or did they?!)

It was the scene with the Art Club though, that first made me feel like this Episode was talking right to me.

This is the culmination of the discussion with the two Art Club members.   So let’s back up a little.  Kanamori keeps oddly silent during the background art review and leaves Asakusa in the hot seat to give criticism and discuss desired changes.  It was a subtle moment where the writers made me feel like Kanamori respected Asakusa’s expertise, and wanted her to make the hard decisions.  While Asakusa is able to request changes, she’s thrown off guard by one of the members feeling like he’s being railroaded artistically. Ideally she should have been checking in with the Art Club in smaller, more frequent meetings to make sure they understood what they were doing and why.  It’s likely that didn’t happen because:

She was too busy doing a bunch of other backgrounds herself.

Now we are back to Kanamori’s statement.  This hit me a little hard because it’s reminiscent of a personal experience.  I was an Engineering Manager for four and a half years at my previous job.  When I made the transition to management my boss told me, “The hardest change you are going to have to make is the realization that your individual acheivements aren’t what matters.  This role is about what you enable other people to achieve.  Also be aware that you are responsible for the final outcome.”  While I started out optimistic, I found this to be a challenge.  Understanding that you can’t do it all yourself, that you must be clear of the overarching goal(s) so everyone understands the plan, and being held accountable for all that goes wrong are part of what makes up strong leadership.  It’s also not a skill that comes naturally to most people.  I love that Eizouken can weave in not only the technical pieces of how to make an anime, but the business/work-flow side as well.

The second part of this episode really tugged at my heart.  I felt very connected to the circumfrential story about Mizusaki.  We learn that from a young age she loved to watch things in motion and capture that in her drawings.  She used her acting classes as a time to watch the movement of people.  She even uses this knowledge to help her grandmother walk when she’s having trouble doing so (it’s super cute). 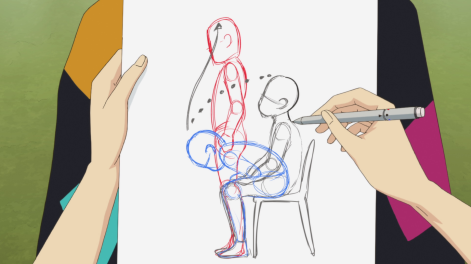 The last four and half minutes of this episode feature Mizusaki discussing what makes animation so special.  Sure, we can all watch an animated feature and tell when a character isn’t moving correctly or some chaotic motion (like a dance) looks off.  Have you ever stopped to think though, about what little details you need to feel like that motion is real?  All the tiny things our bodies do when we move and how much effort an artist has to go through to translate that to paper?

If you can’t tell, I have a deep love for 2D animation.  Since I was young, I always thought the act of animation was modern day magic.  You take multiple still images that have been modified ever so slightly image to image, and then move them so fast that your eye percieves it as motion.  Seriously…that’s magic.  Every scene, every sound, every movement is all created by someone.  When a show captures some of the details Mizusaki talks about (like realistic chainsaw motion!), I notice.  When characters feel like they have mass and move like real humans, I notice.  I want every animator who pours all of their energy into making their world feel real to know that I appreciate it, and I notice..

While all of us anime fans love the medium, there is a clear distinction between anime and animation.  Having the skillset to take everyday motion in life and recreate it in a believable way transcends just “anime”.

Episode 7 speaks to me on a personal level.  It weaves in the woes of leadership and the difficulty in keeping a project on task.  It also gushes about animation and all the little details of life that make us believe in the made-up worlds we watch on screen.  It’s hard for me to express just how much the last four and half minutes of the episode felt like somoene had read my mind regarding my feelings on animation and translated them to the screen.  I love this show.  It’s the highlight of my entire week.  Tell everyone you know to get on board with Eizouken.