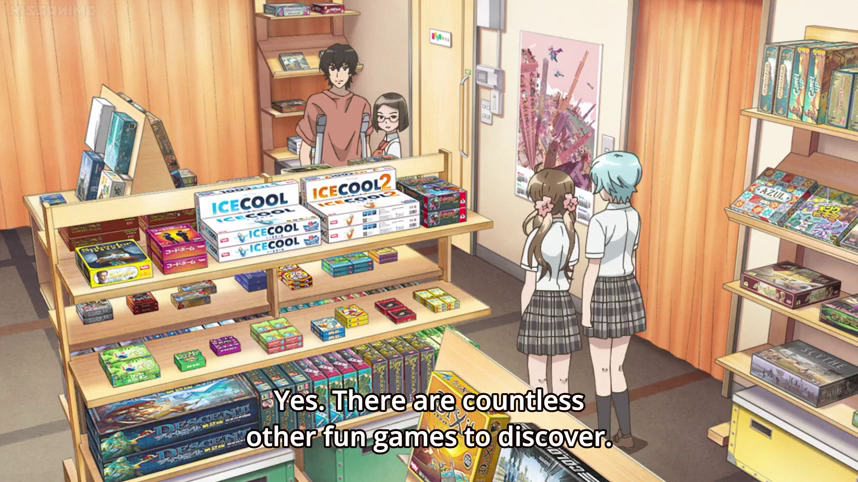 The episode is split into two vignettes.  In the first, Kyoko finds Miki without her other friends around, and invites her for a daytrip to the mountains, where the two bond over nature and a dice game.  In the second, Aya, Miki, and Midori are thwarted in their plans for a board game café at the school culture festival by the student council vice president.  Unexpectedly, the president returns and visits the game store where they work.  After a highly competitive game, he decides to overturn the vice president’s decision.

On initial viewing of this episode, I felt that it was fairly good but unremarkable, but as I sit here writing, I’m impressed by how much was fit into a standard-length runtime.  There was time enough to deepen the relationship between two characters, introduce and resolve a completely different problem concerning the cultural festival, introduce a new character into the mix, spin a strong plot thread about the board game café to set us up for the next episode, AND have time to fully explain a fairly complicated board game. That’s just efficiency right there.

While the first half of the episode doesn’t have much game content, I did appreciate the show taking the time to resolve Miki and Kyoko’s shared backstory.  The little dice games they play were also pretty funny, with Kyoko easily cleaning up with a game about spelling out insults with dice…

…and Miki flustering Kyoko in a reverse of the game where the objective is to be kind.

It’s nice to see Miki (mostly) able to handle herself around the much more outgoing Kyoko… even if she is simply awful at insulting people.

The second half has the board games club meeting their student council president (who’s been away with an injury) and playing a game called The Island.  He’s a fun character as well, able to energetically get into the game and react with a mixture of awe and fear and Midori’s ruthlessness in playing games.

This segment mostly focused on the game, and it looks like a ton of fun.

As before, the explanations given by Midori are clear, easy to understand, and supplemented by the characters’ play session illuminating some of the less apparent situations that arise playing it. 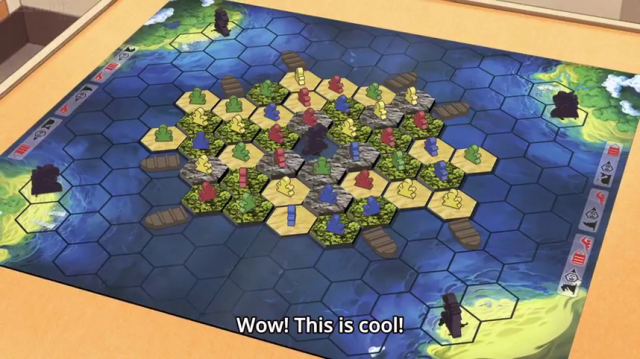 It’s an effective formula that the show could effectively use forever (and, given the length of the manga, already has) – it’s like watching a fun instruction manual and then gameplay demonstrated by a group of friends.  I’m already looking forward to the next game.