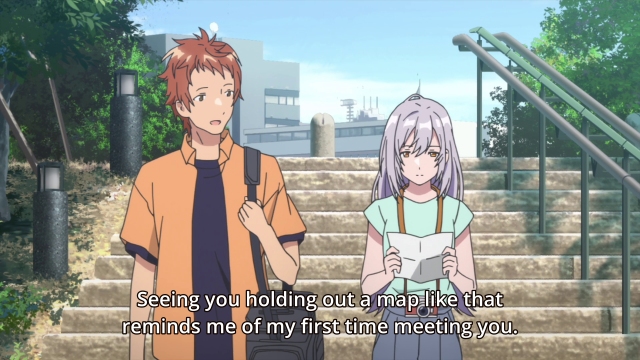 Hitomi has begun to take a more active interest in photography, and she asks Sho to help her find new things and locations to shoot. Seeing what might be his last chance at a youthful romance before moving out of his class, Sho decides to ask her out. Hitomi bolts, confused and doubtful about how to respond. With the help of Kohaku and others, she decides to give Sho a clear answer, but misunderstandings leave their friend Asagi heartbroken.

After a brief diversion with Kohaku focusing on her chronomancy, we return to Irozuku‘s bread and butter of character drama. This episode follows Hitomi and Sho as their actions rebound around their circle of friends and between themselves. It also creates some actual conflict, which has been largely absent from the show since no one seems particularly anxious to solve Hitomi’s time travel dilemma. In that regard, I’m actually kind of on their side, since proper time manipulation means that the only potential wrench in the works is Hitomi aging, and that sort of magic seems more important to do right than fast.

As Scott astutely pointed out in episode seven, Hitomi has undergone a pretty dramatic transformation. While still quiet and reserved, she’s much more open about what she wants and seems genuinely excited about photography. She’s become more open to hobbies, friends and magic over the course of several episodes, and it’s lovely to see someone I was initially iffy grow to become more compelling. 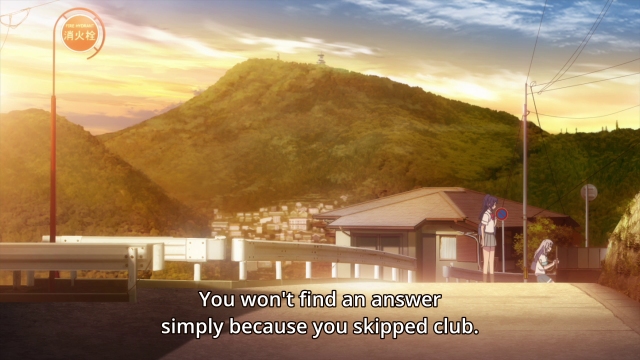 At first, Hitomi’s reaction to Sho asking her out seems like a serious backslide. She doubts her own feelings, and wonders if she even deserves someone else’s affection, which is the exact sort of self-loathing that kept her shut off for so long. I was afraid she might begin wallowing again, but she’s able to pull herself together and turn Sho down as gently as can be hoped for.

As an adult viewer, this sort of hemming and hawing over youthful relationships can seem overplayed, but Irozuku handles it well, and it’s easy to empathize with both Hitomi and Sho being on opposite ends of unrequited affection. Anime set in high school (or the local fantasy equivalent) tend to paint teen romance as the purest thing ever, and anyone who doesn’t have a life partner by age 17 may as well swear off dating or join some protagonist’s ever-expanding harem. Irozuku instead treats romance and rejection as normal parts of life. Within one episode, the main players in that drama are aware of their feelings, come to terms with them, and deal with the fallout. It’s refreshingly to-the-point.

However, the big “but” in all of this is Asagi. Sho’s growing affection for Hitomi hasn’t escaped her notice, and before she learns where things ended between those two, she’s sprinting off crying. Since everyone except Sho seems to have figured it out by now, there will definitely be some follow-up in the coming episodes. Personally, I hope that they don’t go the predictable route and have Sho suddenly manifest feelings for Asagi, who’s so grateful to finally have his attention that she flies straight into his arms. We’ve seen that play out enough that it’s too easy, and doesn’t give either of them time to sort out their own feelings. That’s just my hope though, and it will all come down to execution.

Irozuku delivers another episode with little plot but plenty of characterization. Everyone is growing and changing, relationships are being altered, and it’s being treated as normal. It’s nice to be watching a show where every hiccup isn’t treated as the end of the world, and people make the effort to be forthcoming with their friends. We’ll see how everyone takes the latest developments once the club comes back together.