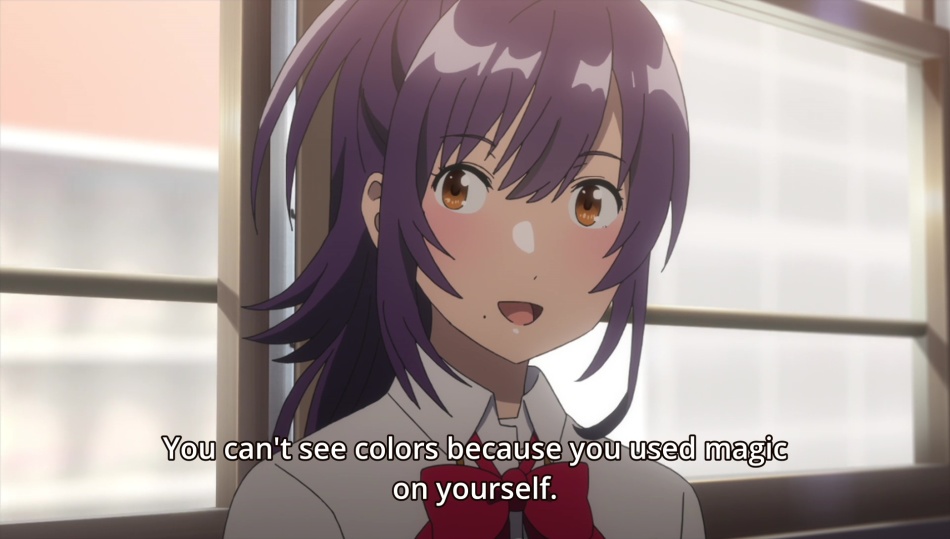 Kohaku starts doubling down on her efforts to learn time magic, and to disover the way to remove the color loss spell she believe Hitomi cast on herself.  She also starts conducting “experiments” with Hitomi and Aoi to see if she gets any outcome.

This episode in one word is: Adorable.  Kohaku pieces together that Hitomi A.) Cast some sort of spell on herself that stops her from seeing colors (Hitomi…girlfriend…you gotta learn to control this stuff) and B.) that having an emotional reaction to Aoi has something to do with her color vision.

Kohaku and Aoi spend part of this episode getting close to one another via adorable force.  I am loving the way Kohaku has a “Screw-this-anime-slow-as-molassas-romance” attitude about getting Hitomi and Aoi to show feelings for each other.  It’s hilarious and refreshing and made me smile a lot.

The other part of the episode is devoted to Kohaku trying to get time magic to work and seeing an unfortunate setback.  Her magic isn’t strong enough to influence time permanently and seems to wear off in a matter of hours.

I remain endlessly amazed at how chill everyone is about time magic.  At one point in the episode Kohaku brings a rose back to before its bloom and her mom just goes “Oh great!  Grandma loves this rose and she’ll be excited to see it bloom again!”  That’s…wonderful and all but are you not the least bit concerned that your daughter can influence time on objects and at that, LIVING OBJECTS?  Well, whatever, I guess it’s all part of the calm atmosphere of this show..

As a last note, this episode has Hitomi making big strides towards being a more confident person.  She makes choices for herself in the photography club, and she makes a big choice at the end of the episode (no spoilers now, go watch the episode!).  It’s gonna get interesting from here on out as I’ve come to be attached to our little Magic Photography Art Club gang.  Some of their feelings, wants, and choices here are bound to lead to heartache or conflict.

The world has started to turn here in Irozuku land.  In many ways this is the episode that switches Hitomi and Kohaku’s positions.  It’s the first time we see Hitomi truly look confident (similar to what we expect out of Kohaku).  On the flip side it’s the first time we see Kohaku look truly conflicted/troubled by having her time magic attempts fail and regarding her wish to make people happy with magic.

I want good things for you kids!  Hang in there!