It’s been 5 years since the showdown between Generalissimo and Sensei. With all the psychics now on the same side and assembled, the team must come together to defeat the dragon that destroyed the planet Sirius. Soya is determined to forgive the dragon and heal its rage with the power of love. Will he succeed?

Warning: Spoilers for Episode 11 of Planet With

Do you remmeber in Episode 7 when I stated that Planet With was trying to be a half-ass Childhood’s End? Well…yeah that’s practically confirmed at this point. Given that they named the two Nebula faction members Karellan and Rashaverak, along with the other uncanny resemblences in the show, and we are all but confirmed that Planet With is desperately trying to be clever by using concepts from Arthur C. Clark’s classic novel.

Not a whole lot happens in this episode, but there is an important plot drop. Soya and company are all grown up now, so we get to see all the characters with different hairstyles and outfits. Aside from Benika of course, who apparently just has a whole wardrobe full of suits. She’s like the suit wearing equivalent of Nickelodeon’s Doug. I’m terribly amused that Torai just hasn’t changed at all (he looks more..haggard? in one of the shots he’s in but that look varies during the episode), and Kumashiro and Inaba become male cat callers (dog callers?) who kick the crap out of Soya in judo for fun. Nezuya is basically just trying to get interstellar laid. Wow guys…you sure are an all-star cast. 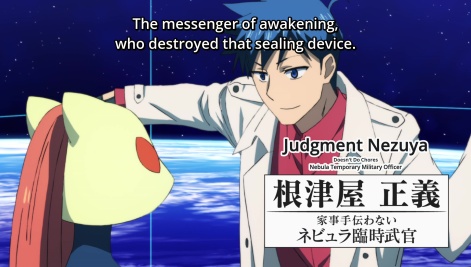 Over the past five years the characters have been developing their psychic abilities in an attempt to have the brain power to help fend off the dragon in the upcoming battle.  I actually wish we had some psychic training discussions or something, but as usual Planet With doesn’t give a damn about details. Just go with it.

While the group is at the cuddle characters convention (the gathering of the psychics), we learn that the dragon was originally a person who has morphed into a hideous beast over time. We also come to learn that the People of Paradise guy who asked Soya to destroy the dragon is connected to the person trapped within said dragon. At the end of the episode the dragon awakens and the battle is about to commence.

I think the real higlight of this Episode is seeing the little romantic inklings between Nozomi and Soya. I think Nozomi is a great character deserving of a better show and her support for Soya is just adorable.

I feel like a broken record here, but…I don’t care about any of these people. Outside of Nozomi, who’s just so dang cute, the rest of these shmoes don’t have enough character development to fill a thimble. The show will likely end with a Sailor Moon ripoff motif where everyone yells about love, and then they’ll transform into bigger and bigger cat and dog bots as the psychics tap themselves out to provide backup. The dragon will revert to its person-self and all will be beautiful.  What I’m most curious to see is if this warning holds any weight.

WHO IS THIS SNOWMAN?!?!He’s shown for a solid 1 second and then the scene changes. I must know!!