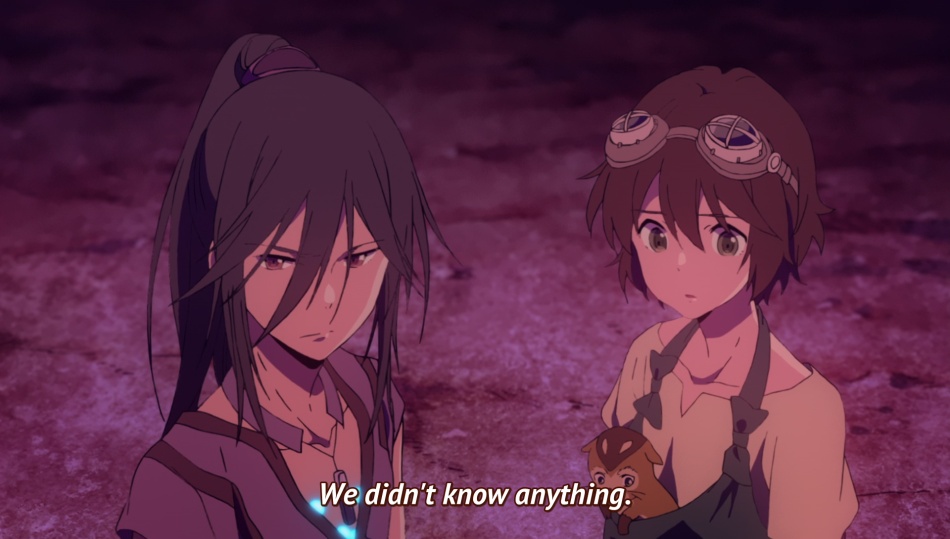 Newly kidnapped Chakuro and Lykos (the name given to the mysterious girl) head back to the floating island and uncover an unsettling phenomenon.  Afterwards, the festival of the Star Locusts, known as the “Locust Swarm”, occurs and events happen that make it so life for all of Falaina will never be the same again.

Sorry, I needed to reset my neck after the whiplash of Episode 2.

Oh my Heavens.  I knew Children of the Whales was moving a little fast when Episode 1 ended with a return to the mysterious floating island.  It seemed that should have come a little later in the series, after we learned more about Lykos, or loaded more Chekov’s guns or something.  Instead, our return to the island drops a seemingly massive plot point about what “Lykos” actually is so we are just barreling straight in.

It’s not that this plot point isn’t interesting, it’s that it’s thrown at you with such speed that it fails to have any impact.  A giant pulsing blob that eats people’s emotions and is the cause of some great war outside of the Mud Whale?!  That seems really important!  Let’s spend more than five or so minutes on it!  Despite this world shattering revelation, both Chakuro and Ouni decide it’s cool to hide all the details from the village elders.  Guys…what are you doing?!

Afterwards, we are immediately ripped BACK to the mudwhale where the show feels like it can shed the heaviness of the previous sequence and bounce right into cutesy mode.  Oh look, we are going to a festival and Oh hey, there’s some budding romance here!  Isn’t that adorable?!  Umm…show…I’m still focusing on the part where there’s an island full of bodies and a pulsing blob structure that EATS…PEOPLE’S…EMOTIONS…

You know, the one we did nothing about and just LEFT THERE on the island!  It’s as though the show thinks it’s done something clever by leading itself off with a mystery and deluding you into thinking that all is calm now.

As if I’m gonna fall for THAT nonsense!  Without missing a beat the show decides to end on a crazy-ass revelation from Lykos and mass murder.  Now I hope you can appreciate why my neck hurts.

To give the Episode credit where credit is due, it continues to look and sound (we get the theme song!) beautiful.  The festival in particular is gorgeous to look at and listen to, and is a nice piece of cultural detail for life on the Mud Whale.  All the character designs are colorful and eye catching.  In contrast, Lykos’s blob-like structure’s animation style is particularly striking (it’s like a creepy clear gel) and gives the viewer an uncanny feeling.  It really drives home that point of being otherwordly.

Children of the Whales is not getting off on the right foot in this episode.  It throws a massive reveal at you early on, and then proceeds to just jarringly yank you into a calm moment, before wildly swinging you back into sheer mayhem.  It needs to calm down and let some more information build up before it just throws large plot points and events down like this.  Hopefully it takes some time to do that and course corrects before things get more out of hand.

2 comments on “Rolling Review – Children of the Whales (02)”