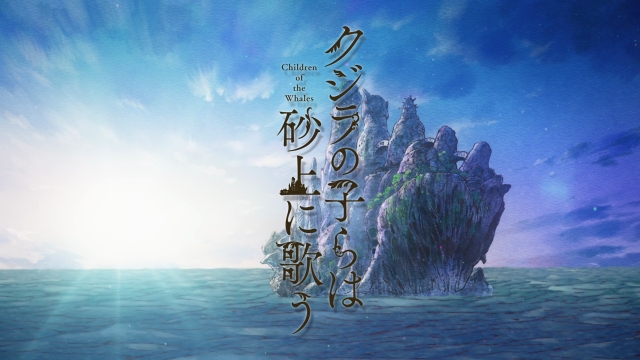 A floating island slowly drifts through the endless, shifting dunes of the sand sea. Nine in ten people here are born Marked; blessed with telekinetic abilities and cursed with short lives, typically living only into their 20s or 30s. On this island lives a young archivist named Chakuro, who records the stories of his home, affectionately dubbed the Mud Whale. Though Marked, his mastery of his powers leaves a lot to be desired. Still, his excellent memory and passion for writing make him a valuable member of the community.

One day, another drifting island appears in the distance, and Chakuro is sent with a scouting party to hunt for useful tools and materials. Separated from his companions, Chakuro comes across a strange, seemingly emotionless girl, who suddenly attempts to kill him before collapsing. The scouting party brings this strange girl back to the elders that rule Mud Whale, but a young criminal interrupts their inquiry and kidnaps both the girl and Chakuro. For the first time, Chakuro has the opportunity to see the world beyond the tiny island he’s called home for so long.

At first glance, Children of the Whales has a lot of elements that many other shows have covered in the past. Before the end of episode one, we’ve got a potentially post-apocalyptic setting, young people with vaguely-defined magic-like abilities, and an emotionless girl with a knack for violence. While these may seem overdone individually, this show weaves them together nicely and builds excellent context for what we see on screen. The first episode is a little heavy on exposition, but that’s not really a bad thing when you’re introducing a completely new world to the audience.

The first thing you’ll probably notice about Children of the Whales is the artwork. The characters are painted in soft pastel colors with very thin lines, set against detailed and heavily-textured backgrounds. It’s not a combination I’ve seen much of in recent years, and it’s always nice to see a studio embracing a different visual style, especially when it’s as well-executed as it is here.

I find the backgrounds to be particularly eye-catching – they’re reminiscent of the early work of Miyazaki and Studio Ghibli. I think it’s the man-made earthwork and greenery that makes the connection, and it gives the environments a lived-in and welcoming feel, especially against the harsh backdrop of the unending desert the show takes place in.

Setting the art aside, I greatly enjoyed how the first episode laid the foundations of its story and setting. Chakuro seems like a decent guy, and his love of history and recording the lives of his fellows makes his generous narration less stilted than it might feel otherwise. It gives us all the information we need without slowing down the story too much, and all but vanishes after the halfway point, leaving us to experience the world of the Mud Whale from his perspective. While we don’t have much to go on from the rest of the cast so far, everyone seems nicely characterized without relying too much on the cliched character archetypes we’ve come to expect from modern anime. Even Lykos, the emotionless girl Chakuro finds on the drifting island, seems to be something greater than just another dead-eyed non-character that the audience is supposed to somehow find endearing. The island’s elders talk about her as if she’s a symptom of something that has been affecting the world for a long time, making her condition part of a much larger mystery.

I also appreciate that we get a taste of every major character’s motivations early on. Chakuro is driven by a desire for knowledge, which is great for allowing us as the audience to become immersed in an alien world. The criminal, Ouni, is driven by a desire to break away from the island that he sees as more of a prison than a haven, and it’s easy to see how someone would come to feel that way as they count down their limited years seeing nothing but the same bleak wasteland. Lykos is a cipher by necessity, but the elder’s reactions to her presence make it clear that we’ll learn more in time. Even though those elders know more than they’ve let on, their actions don’t seem malicious, and it’s nice to see people in a position of authority that are neither beneficent saints nor scheming authoritarians.

While its characters may not jump out initially, Children of the Whales does offer a very interesting world from the outset. Citizens of the Mud Whale habitually try to keep their emotions in check, mainly to prevent themselves from being overcome by grief when 90% of their population dies well before reaching middle age. It also seems to be a way for the Marked to control their powers more efficiently, though this may just be my impression after seeing how the clumsy Chakuro was able to protect himself from Lykos. In any case, despite keeping a lid on their feelings, the characters are clearly passionate, and it serves as an intriguing cultural facet rather than an ironclad rule. There are plenty of other cool setting and environmental details to watch out for, though listing them here would take far too long.

Overall, the show seems to be as much about the world as it is about the characters, and I think that’s what put it high on my list for this season. I love some good world-building, and Children of the Whales is certainly delivering that. It combines well-trod elements competently to create a solid foundation for us to experience its plot, and so far, I’m more than intrigued enough to keep going. Topping that off, there’s nothing in it that annoys or frustrates me (so far), which is a rarity. I can generally look past minor annoyances like dumb character affectations or occasional fan-service, but not having to deal with them at all is a welcome departure.

Children of the Whales opens with a rock-solid episode that provides a good jumping-off point for the rest of its story. The world is melancholic, but the characters within it are doing their best to live their lives in spite of a difficult situation. There are hints of many mysteries to be unraveled, and the potential for both high adventure and introspection as our cast braves the sand sea in search of places beyond their home. I’m definitely looking forward to seeing where they end up.