Somewhere in the dark and nasty regions, where nobody goes, stands an ancient–

Wait; no – that’s The Trap Door, a series of UK claymation shorts from the mid-80s about living above an uncharted cave system that regularly spat out bizarre creatures. Some of my earliest memories must be watching those old PAL tapes…

…my family is weird.

Anyway,
Riko continues to display chutzpah, knowledge, and resourcefulness as she and Reg begin traversing the second layer of The Abyss. Unfortunately, she also continues to display how her lack of training, experience, and physical capability leave her dramatically unprepared for this journey as the pair come across more denizens of the deep on their way to the Seeker Camp. A near-fatal encounter leaves Riko without her notebook, but the stress causes Reg’s “muscle” memory to reproduce the energy beam from the prologue, giving this episode its title: “Incinerator”.

Anyone else ever see that movie Predators? I know there’s a few of us out there. Did any of you think back to the scene where one of the aliens had set a trap with a dead dude and a recording before Riko and Reg put eyes on the corpse-weeper? High fives all around.

For real, though – this place is insanely dangerous. If Riko can be carried away by a creature this easily, and subjected to enough of a vertical rise in layer two for the curse to cause her to throw up and pass out in seconds, she really shouldn’t be down here. She survives, barely, thanks to Reg rediscovering one of his features, and he also saves them from the Princess-Mononoke-lookin’ inbyos.

Beyond brushes with the local wildlife, a good chunk of the episode is also spent further examining the culture of cave divers…

… (those knorks though) and also on Riko being intensely delusional.

Speaking of both cave diving culture and delusions, does Riko really think that she and Reg are just going to waltz into the Seeker Camp and everyone there is simply going to let them continue to descend? I mean, I guess she does now, since Habolg gave them some supplies and told them that she already has a personal relationship with the camp boss, but surely her plan was to stop there even before that revelation.

Shiggy’s description of the layers in episode three implies that every color of whistle corresponds directly to a maximum allowable depth. Red Whistles can’t descend into the Forest of Temptation without abandoning hope of rescue; only Black and White Whistles can go to the Goblet(s) of Giants; only White Whistles can go to the Sea of Corpses, and the label of the Capital of the Unreturned is really just a name for the depth beyond which literally no-one has ever returned (with reports from the descended seeming to suggest that a lot of ancient edifice remains intact). Presumably the transition from Blue to Moon Whistle comes with access to the Great Fault, although that distinction may not be a particularly useful one if it’s as featureless as it looks – perhaps leading to the additional administrative distinction of allowing Moon Whistles to be instructors. The map has that half-boat sticking out of the cliff, though, so there’s probably something cool down there.

Where was I… right, so Riko’s already a layer out of her depth and wants to go further, but I suppose that’s really going to depend on what she can negotiate with the Unmoveable Sovereign, or, perhaps more likely (since Ozen doesn’t seem to be thrilled with Lyza’s decision to abandon their mission and save her daughter), whether she can slip through her fingers.

I was wondering before (I think), but why didn’t Reg take his red whistle? It would make it less likely for him to be immediately identified as a threat by other cave divers (case in point: the Seeker Camp lookout).

Where did the Moon Whistle getting eaten come from? He’s pretty freshly dead. Maybe he was part of Leader’s expedition to retrieve Riko and fell – if so, maybe Leader and their remaining companion will venture into the Forest of Temptation after him, if not after Riko, and we’ll see Leader again after all.

I wonder if Ozen is at all related to the orphanage director.

There’s a little less scenery to ogle in this episode than the last one, but everything still looks great. The monsters are drawn with more recognizable line-work than before, but they also spend a lot of time up close and personal, so it may have been necessary from a being-able-to-tell-what’s-going-on standpoint (perhaps in addition to cost and/or logistics).

The music in this show is so good you guys. It’s tonal and ominous and mmmmmm makes me happy and worried at the same time.

On the subject of being worried: the last time I saw an anime ED with people doing this: 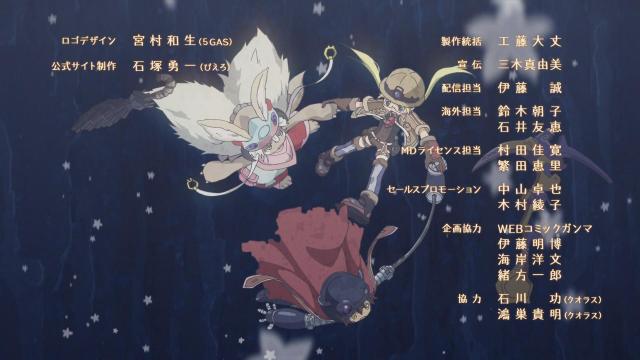 …it, ah, didn’t end well. I will also note that the OP and ED change slightly in this episode (the OP in the ending frame, and the ED with a minor addition midway through), though what the point was in hiding the Seeker Camp inhabitants in the ED given how much it focuses on a character who is still yet-to-be-introduced is a mystery to me. Perhaps my greatest criticism of Made in Abyss so far is revealing a future group dynamic outside of the show proper (though Reg does spend an awfully long time up and about before firing the incinerator actually takes its toll).

Made in Abyss is moving right along: we’ve covered about the same vertical distance that we did last episode ( ~1300m \ ~4400ft). It seems like we’re probably going to stay at the Seeker Camp for a little while, but if that means learning more about the history of The Abyss in some well-structured exposition and flashbacks (which, at this point, I am fully confident that this show can pull off), I am 100% all for it.