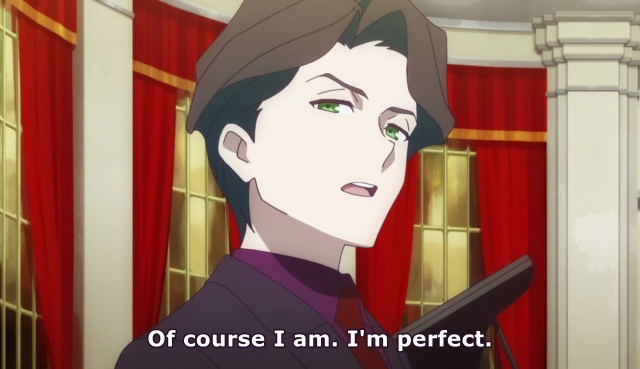 Episode Synopsis: The Earl is throwing a party for Andrew, and Akko is, naturally, not invited.  Taking the existence of a party she’s not at as a personal affront, Akko breaks in, dragging Lotte and Sucy with her.  For… reasons (or, more likely, no reason at all), Sucy has brought along a bee whose sting causes its victim to fall in love with the first person they see.  Hi-jinks ensue.  By the end of the episode, Andrew is starting to feel an attraction to Akko (or maybe just to her anti-authoritarian streak), while Frank, Andrew’s friend, has realized that Lotte is the girl for him.  Sucy remains beloved only of mushrooms, just the way she wants it.

Episode Review: Episode 10 is similar to the previous few, in that not a lot of importance happens, but it’s fun to watch anyway.  For one thing, Diana, thank goodness, is back.

And where Diana goes, so go her terrible toadies.

Unfortunately for Team Rival, Sucy’s love bee makes this an evening they will always want to forget.  Initially, the bee’s sting causes Diana to fall in love with Akko.

Her poor toadies spend most of the episode as follows:

Of course, Akko is only a temporary placeholder for Diana’s true love: 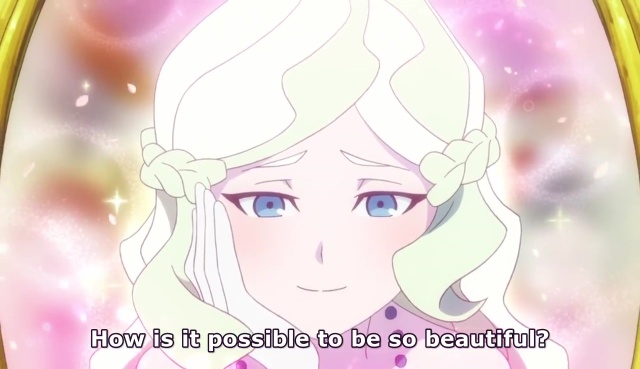 Herself.  At last, she’s found perfection.  As you might imagine, this isn’t an episode where a lot of serious business occurs, but it is fun to watch the love bee’s effects on everyone.

Now, that’s not to say that everything in the episode is complete fluff.  The episode builds on the introduction we got to Andrew in Episode 6, and gives us a lot more insight into his father, the Earl. 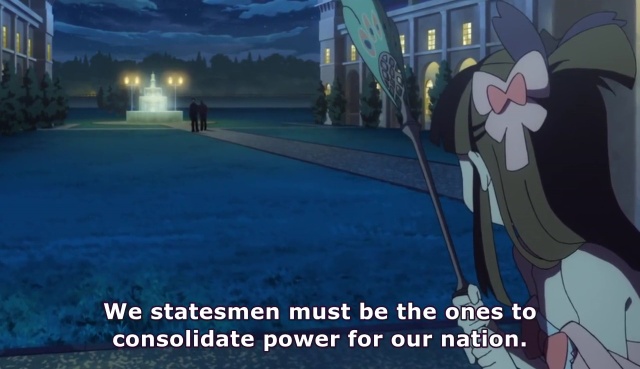 The Earl has been grooming Andrew for his entire life to become a leader and powerful figure in his country.  To the Earl’s way of thinking, this means eliminating everything that doesn’t lead to status and power, such as witches or, say, piano.  Andrew once expressed interest in the piano, so his father forbid him from touching a piano ever again.

Andrew resents this constant control, but feels he has a duty to do what his father directs.  Enter Akko:

As usual, Akko’s forthright and earnest attitude carries the day, and her enthusiasm rubs off a little on Andrew.  The episode finale features Andrew at the piano playing Flight of the Bumblebee as Akko hunts down and swats the love bee to end its spell.

As in the fountain episode, Andrew seems to be having fun with Akko, though he’s careful not to show it too much.

Meanwhile, things have taken quite a turn for Lotte – even after the bee’s effects have work off, Frank remains interested.

I gotta give it to Lotte (and the show) though: she might be “the plain one”, but that doesn’t mean she’s going to settle out of desperation – she turns his date offer down.

So we’ve got the beginnings of some more interesting relationships between our characters.  And hey, Akko even uses magic and has it do what she wants! 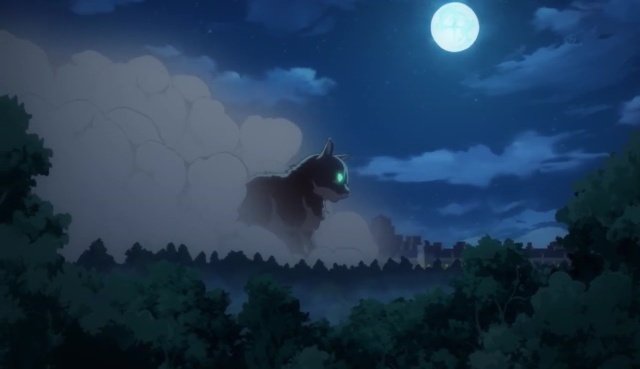 Granted, what she wants in this case is a squirrel large enough to terrorize the country, but at least it’s a start.

In summary, Sucy continues to be fun to watch,

And I’m looking forward to more episodes with Andrew (as are the girls).