Episode Synopsis: Akko awakens to her first day as a student of Luna Nova Academy.  Magical classes aren’t as exciting as she had hoped, but at least she has now has friends to sit through it with.  One girl in class, however, seems almost too good to be there – Diana Cavendish, the daughter of a powerful and respected magical family.  Diana belittles Akko’s devotion to the performing witch Shiny Chariot, but when one of Diana’s spells has an unexpected result, it’s only Akko’s quick thinking and (no joke) perfect memorization of the Shiny Chariot trading card game flavor text that saves the day.

Episode Review: Little Witch Academia is off to a great start, because this episode was just as much fun as the first.  Akko and company are so expressive as they go through their day, you can’t help but smile.  For example, Akko just can’t wait to start learning how to be a witch.

Until she gets to class, anyway. 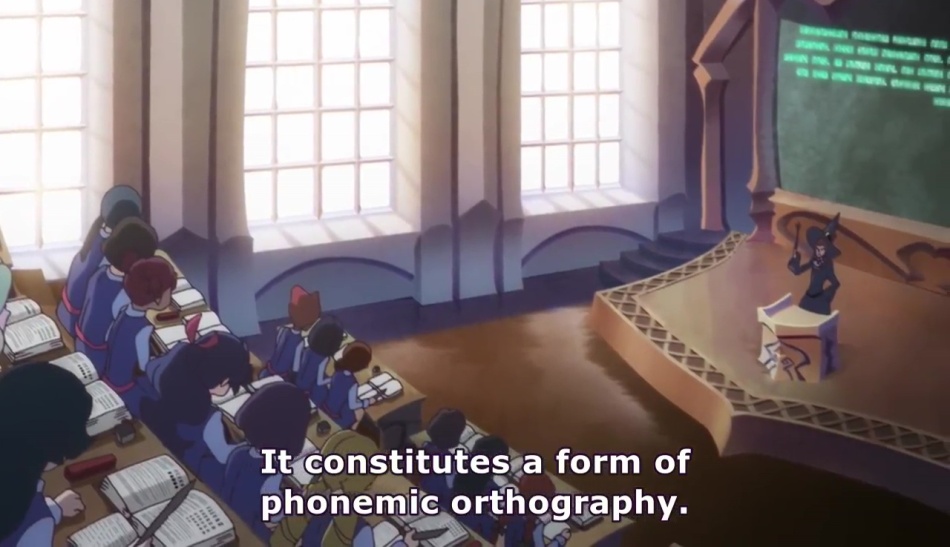 After a full morning of this, she’s fit to be tied.

But it’s not just Akko who’s fun to watch.  At another point in time, they’re in a potions class as Witch Crazy-teeth shows them the finer points of cackling over a cauldron.

Everyone in class is hacking and gagging… well, almost everyone.

Sucy, of course, pays rapt attention in this class.  Besides the joys of academia, we’re also introduced to what seems like a pretty important character.

Diana is poised, confident, knowledgeable, and (already) world-weary.  Naturally, it seems like Akko (the clumsy, stubborn, clueless, and wide-eyed) is destined to end up as her rival at school, and Diana plays the “better-than-you overachiever” role so well that I’m sure I’ll always look forward to seeing her on screen.

The art in the episode is top-notch as well, demonstrating that whatever level of detail the scene requires, Trigger is there to deliver.

Side note: I also love the little imp guys that serve as the maintenance staff for the school.  They’re often in the background of shots; and give off a “seen it all” union vibe.

They’re even in the ending credits, guiding in the witches-in-training to a broomstick landing with handheld paddles.  I’ll certainly be keeping an eye out for them in future episodes.

In short, the show is fun, clever, and thoroughly enjoyable, and I’m already looking forward to next week.