Elystadt has enjoyed three months of relative peace, but Germania has not been complacent.  After a feint draws most of Elystadt’s defenders to the west, they attack from the east.  When Izetta arrives, she is confronted by Sophie, a clone of the White Witch, who has been created by Germanian science.  When the fight between the witches gets underway, Izetta falls prey to Berkman’s preparations (apparently the Witch McGuffin can suck the magic out of an area while simultaneously powering up its user) and is captured by Germania.  Germanian forces, led by Sophie, capture the capital of Elystadt two days later, with the fate of Fine and the rest of the Elystadtian high command unknown.

Well, show’s over, I guess.  Pack it in, everyone.

In all seriousness, though, wow, this show never slows down, does it?  In a way, I can appreciate that.  I’m no fan of filler episodes, and even the sort-of filler setup we had in Episode 6 actually contained a huge amount of plot development.  And that’s great.  At the same time, though, I can’t help but feel like the show could use a little more time to flesh out some of the events we’re seeing.  More time would have made the world’s tiniest love story last episode feel tragic at its conclusion, instead of ridiculous, or allowed Berkman’s witch countermeasures to be less contrived/lucky and more clever.  Sieg alone could probably use half an episode’s worth of time to himself.  As things stand, the show is keeping to such a tight schedule for its plot that there’s no time to get to know the characters or feel the weight of the plot developments before racing to the next scene.  A good example from this episode would be the Resistance.

Right at the start of the episode, we’re treated to shots of the Resistance in Germanian-occupied lands ambushing a Germanian military train.  Then Izetta arrives to help them out, the train is defeated, and we’re back at Elystadt’s castle discussing it in about a minute.

There has been no mention of the Resistance before this episode, for reference.  Where was Izetta fighting?  What was the impact of taking out that train?  Is Elystadt now explicitly helping other countries fight the Germanians?  None of these questions are answered.  Instead, we’re on to the next point before you can blink.

The pacing aside, I do have some more substantive complaints about the episode.  As mentioned, it’s been about three months since the last episode, and Germania has not invaded during that time.  Instead, they’ve made a new class of vehicle specifically to combat Izetta…

…as well as somehow resurrecting and controlling the original White Witch, Sophie.

What has Elystadt been up to?  They’ve put wings on their torpedoes so Izetta can control them more easily (why exactly wings would help is unclear) and upgraded her riding-gun.

Other than that, though, this here is pretty much the rest of their plan:

Instead of doing literally anything else to prepare, like thinking up a way to stop Germania’s tanks without requiring magical lances, they’ve pretty much focused the entire country’s output on Izetta.  At one point, an advisor reveals that the country’s weapon manufacturers were asked to imagine a weapons system to fight against Izetta so they could try and guess the Germanian plan.  Really?  Maybe they could be inventing, I don’t know, an infantry-portable bazooka instead of those single-shot rifles your army uses to fight the armored blitzkrieg, or a tank that isn’t the laughingstock of Europe.  What if Germania attacked from two directions at once?

Only compounding this is Fine’s ludicrous overconfidence when the Germanians start to mass on the border again.

Fine, I thought you were the smart one.  Between Coenenberg and now, let’s see… Germania has infiltrated spies into your country, TWICE, attended your cosplay masquerade and got so close to Izetta that someone BIT HER, and so thoroughly outwitted your intelligence services that when Izetta went to destroy a lone carrier sitting at the dock she ended up facing an entire fleet of destroyers on the open ocean, supported by a plane so agile that Izetta couldn’t outmaneuver or fight it.  In short, yes, Germania has learned a lot from their defeat at Coenenberg.  Why would you ever think they were going to try the same old tactic again?  You should, instead, be worrying “what amazing and unforeseen (seriously, Sieg, what are you even doing?) trick will Germania pull out of its sleeve this time to endanger Izetta and the existence of my entire country?”  Short version: Evil will always triumph because good is dumb.

At the same time, there’s something that’s been bugging me about the setting for the show.  Namely, what is going on with the rest of Europe?  Thermidor (France) has been defeated, Brittania is essentially out of the war, and Atlanta (USA) is still sitting this one out.  Fine’s negotiations are starting to bear fruit, but there are no troops on the ground yet.

So… is anyone other than Elystadt currently opposing Germania?  Or is World War II just “The Germanian-Elystadtian War”?  It certainly seems like Germania can devote their full resources to increasingly-complex plans to capture a single girl, instead of worrying about any of their other enemies.  Germania doesn’t even use that anti-Izetta vehicle, for example, it’s a (comically expensive/complicated) feint just to draw Izetta to the wrong side of the country.

Bringing things on down from the strategic scale to the personal drama scale, Sophie has an interesting line during her fight with Izetta.

She attacks Izetta for always following and obeying Fine… and I found myself agreeing with Sophie on this one.  Earlier in the episode, Fine and Izetta have a conversation in which Fine apologizes for probably not being able to fulfill her promise to Izetta to end all war in the world.

In yet another burst of uncalled-for overconfidence, Fine is concerned that Izetta will beat the Germanians so thoroughly that they will call for a ceasefire with the other allies, which will leave them strong enough to be a threat and, in her own words:

Now, there’s a lot I could talk about here (what is your goal for Germania then, Fine?  For them to be so utterly destroyed by the allies that nothing is left?  Pretty bloodthirsty, aren’t we?), but in lieu of that, I’ll just say this: Izetta, what ARE you following Fine’s every word for?  She can’t bring you the peace she had promised.  What is your motivation?  Is it purely love for Fine herself?  I feel like Sophie made quite the valid point, even if Izetta brushed it away.

Not that it matters anyway, because the breakneck pace of the show means that Izetta is defeated and captured minutes afterwards.

The last of my complaints centers on Sophie herself.  I had really been looking forward to Izetta, “The Last Witch”, in her role as the sole user of magic during a WWII-style conflict.  That’s an interesting dynamic, and it seemed like the show was going to pull it off – Berkman and Germania mustering every bit of cleverness and technological innovation they could to figure out a way to fight against Izetta’s fairy tale powers.  There’s a lot you can do with that.  Instead, as of this episode, we get this:

Ugh.  Guys, I don’t need a show about two magic users fighting each other.  Anime has like a million of those.  The whole draw of this show was in the asymmetrical nature of the fight.

Now, all of that complaining aside, I will give the show credit where it’s due.  The plot twists, even if they are moving way too fast, still do feel original.  I had figured Germania would use its new knowledge of the leylines to invade through a low-magic area again, or something like that.  I was convinced those new anti-witch vehicles and maybe the plane would feature again.  Instead, they had an entirely different tactic, and, much like the fakeout with Jonas, I appreciate the surprise.

The show also still looks and sounds good.  This episode had some nice stills/backgrounds…

…and a charming comic book cover of the latest craze sweeping the nation: 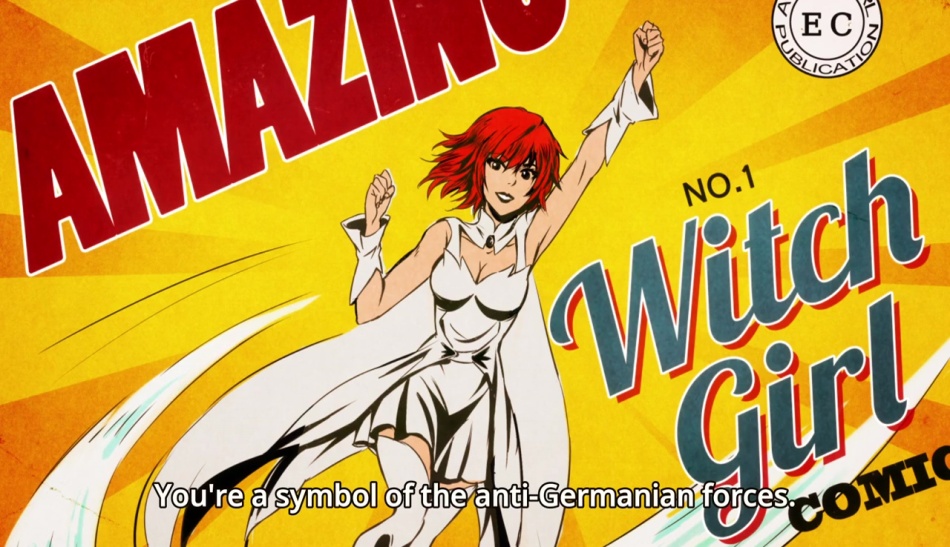 I’m not enough of a comics book guy to know if this is even close to the style of comic books of the time, but it’s a nice touch anyway.  Now if only the guys in charge of the plot brought the same level of craft to the show…