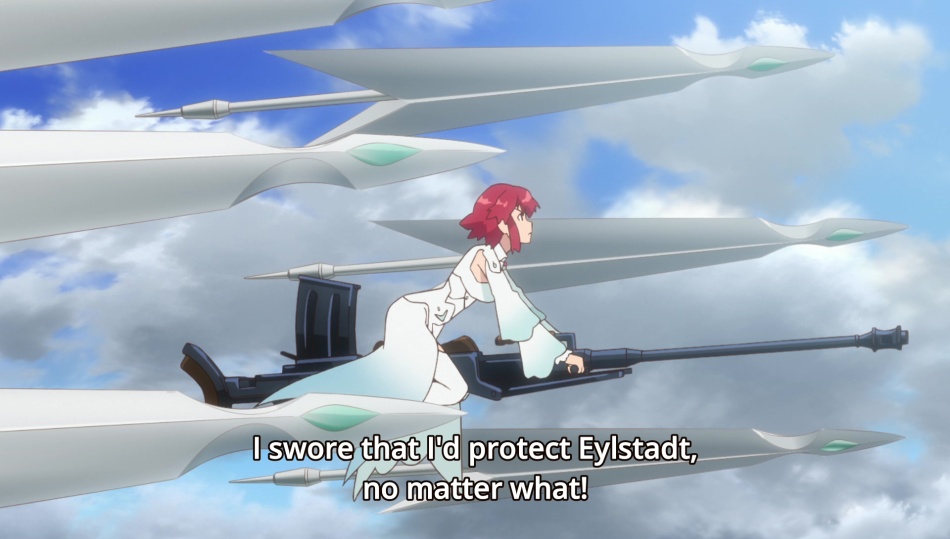 The finale is now, as Sophie and Izetta battle it out to decide the fate of the war. Elsewhere, Finé, and her squad go on a mission to break into the peace talks.  She wants to reveal Izetta’s bold plan to remove all magic from the world, and get the Allies to rise up in unison against Germania.

Here we are everyone. I finally get my moment to shine as the final commentator!!! Shuumatsu started out strong, began to crumble in the middle, and just straight up exploded in the end. Strangely enough those were my thoughts on Episode 12 as well…

Episode 12 gives the viewer a sense that there was so much more story to tell, and so little of it was thought out. So many plotlines wrap up with unsatisfying endings, and the actual ending? Don’t even get me started…

No…wait…get me started…
That’s what you are here for, right?

For anyone’s whose interested, there are massive spoilers ahead.

Let’s start with the good aspects. Finé decides to make a stand and puts on her battle outfit so she can high tail it to the “peace” conference. Peace of course, is bogus because Germania is essentially trying to hold all the other nations hostage with a bomb threat. It’s nice to see Finé back in action. It brought back feelings from Episode 1 where, you know, the show was actually good.

Finé breaking in on the peace discussion was followed by an impassioned speech which was genuinely moving. Her strength in the face of potentially losing her best friend (and love interest?) turned her back into the character I really admired and rooted for. 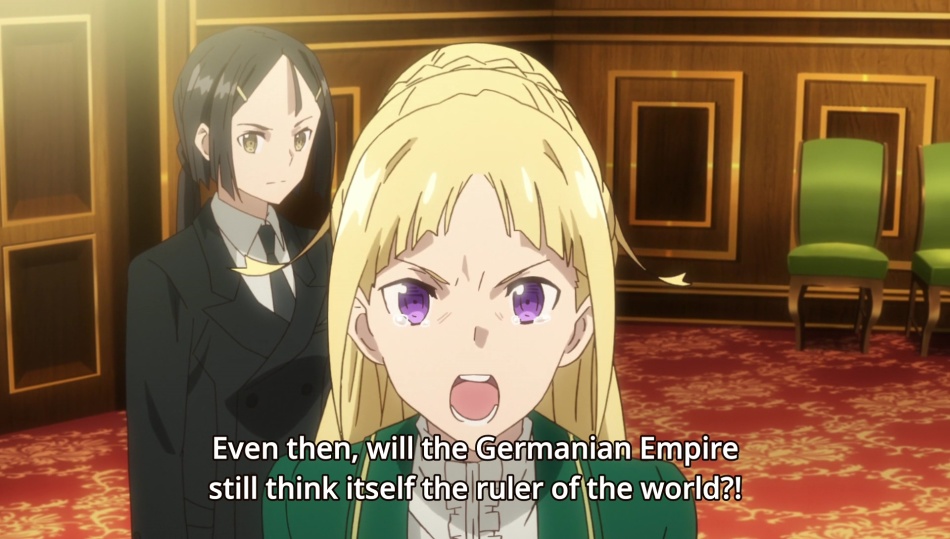 Izetta’s battle with Sophie contains some fun and high powered magical aspects. My particular favorite was Izetta snapping the Eiffel Tower in half to throw at Sophie like a gigantic spear. Sophie’s train whip was also impressive, albeit slightly more absurd looking.

Izetta and Sophie eventually pull all the magical energy out of the land in one desperate attempt to out-super bomb each other. The bomb that Germania wants to use is stopped due to having no magic.  Sophie’s death is implied as she just…slides off her broom, but she was barely a character anyway so it’s all good. Izetta’s death sequence was something I did find beautiful. The moe blob witch finally made a decision for herself to protect Eldystat no matter what the cost.  In her last moments, she dies in a beam of light as she smiles about life. She’s done was she wanted to do, and made the ultimate sacrifice for Finé. Finé cries as she watches the beam rise up into the sky, realizing Izetta is gone. Well done show…I applaude you. 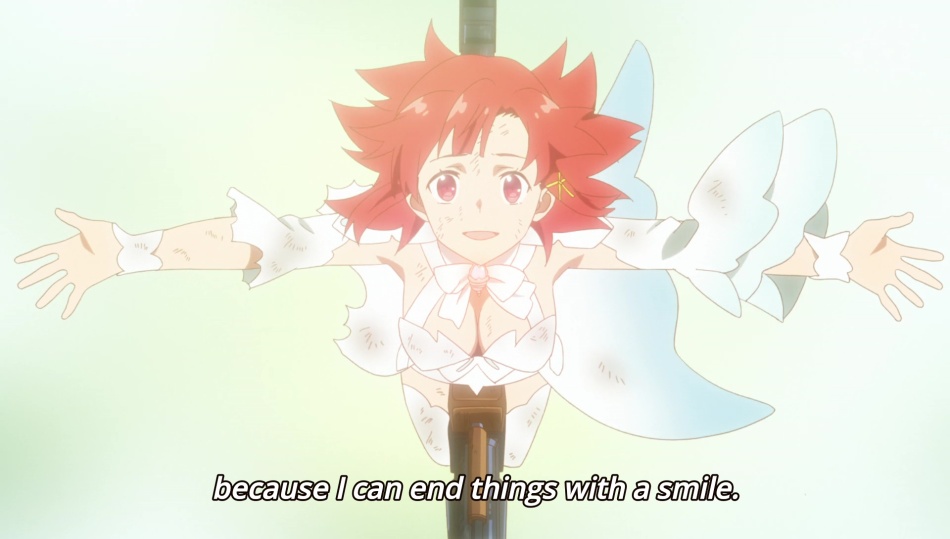 Until…I stop applauding you and punch you in gut for not committing. More on that later…

Now it’s time for the bad. As Finé and company are running to the peace talks, Sieg separates himself to create a diversion. He runs into a young Germanian soldier who suddenly reminds him of Jonas. In his moment of hesitation, he’s shot and that’s the end of him. Guys…are you serious?! Sieg was meant to be the stone cold side of the war. While Finé attended dinner parties and schmoozed Britannia and America, Sieg was the man with the shady connections and undying loyalty. There was never an inkling that Jonas’s death was anything but a necessary evil. Sieg’s death felt worthless, like they didn’t know what to do with him, so they decided to give him a nonsensical moment of regret and kill him. I just threw up my hands at this and asked, “What was the point of THAT?!”

Sophie suffers a worse fate. In Episode 4 it was laid bare that the the White Witch fairy tale had a dark twist to it. In Episode 8, that dark twist is revealed. The show has made barely any effort to add any more empathy to Sophie’s character, and suddenly feels compelled to have her shout her backstory out to Izetta during their magical battle. People…we ain’t got time for her backstory now. Maybe you should have done that throughout the show, starting with Episode 5. You know, instead of pie chasing and breast jokes and yelling state secrets into the forest, and having dumb romance plots that go nowhere!

The kick in the teeth is Berkman, who escapes on a motorboat after being shot, point blank, by the Germanian pilot. In the end he is shown with an eyepatch clearly selling out everyone. What the hell?!

By the time the show tries to pour the sentimentality in, by discussing somewhat real history (America, Britannia, and the country that Germania had a non-agression treaty with totally go in for the kill. “Not Hitler” holes himself up in his bunker and eventually commits suicide), I was done with this mess. As a side note…Japan…I noticed you are conveniently absent from this WWII recreation and therefore you play no part and definitely don’t lose along with Germania *cough Germany*.  CLEVER… 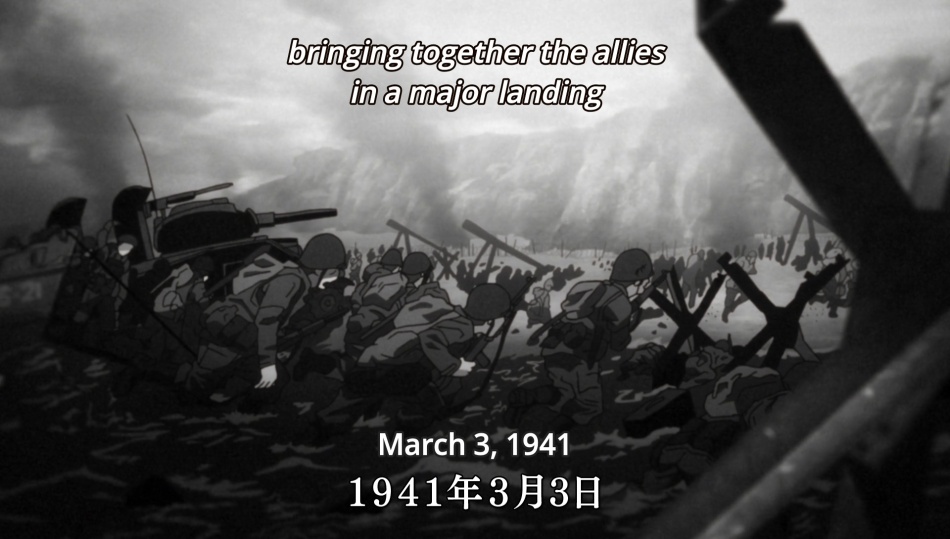 Here’s where everything goes to hell in a handbasket. Instead of telling you, I’ll show you with two images. Let’s all yell together.

Ultimately the show desperately needed more episodes and a better spread of its plot threads. Sieg needed more fleshing out, Sophie needed more backstory, Rickert needed to have infiltrated earlier to make his romance with Bianca more believeable. Berkman’s betrayal was total B.S., in addition to Germania getting all the secrets in Episode 8. The mirror match between the witches was a waste of time and potential and, what the heck were the rebels doing? Who were those people?!?!? The show looked good for most of its 12 episode run (especially the scenery and mechanical details).

All in all, Izetta: The Last Witch is a bad show. It was so ready for greatness and threw it all away for bad plotting, poor characterization and the dumbest ending. Thanks for coming along with us on this journey everyone. It’s too bad this show didn’t work out, but here we are. Here’s to hoping our next pick goes better than this.

For the last time, enjoy some Izetta on the Weekend.