Long ago in a distant land, </Samurai Jack reference>

Swordswoman and Human-Shisa fusion Koma Kage jumped off of a boat * onto a bunch of icebergs, hoping to reach the thitherto unexplored land of Terra Australis. In fact, she ended up in Antarctica, and was ultimately frozen in stasis until she was discovered in 1973 by a Japanese scientific expedition. Having determined her to be the fabled Iron Mask Fencer (the inspiration for Kikko’s manga in episode 8), and great-(great-great-x?)aunt to the current Prime Minister, the gub’ment sics her on rogue superhuman Jiro Hitoyoshi. Even more than eliminate the supposed leader of the forces of chaos in this time, however, the Iron Mask Fencer has something else she wants to do – or, rather, to undo. As Jiro and the Superhuman Bureau intercept her, the conversation turns to the differing philosophies of two cultures regarding the proper handling of evil, and of evildoers…

Concrete Revolutio rocks yet another episode with a self-contained main story that catalyzes multiple enduring plot points. Koma doesn’t end up actually doing a whole lot (except wrecking Raito’s new base of operations), but keeping it that way actually requires a lot of work on the part of several people, and other things are revealed or are set in motion as a result of these efforts.

All of this, of course, is wrapped around Koma coming to terms with waking up three hundred years after she sealed away the bizarrely-named Zess Satan using the life force of his traitor general Dragon God Asahi. Even though Asahi had turned from his evil ways, even going so far as to befriend Koma, the laws of the land demanded that she destroy him for his actions as a minion of darkness. Jiro seems initially to miss the point here, which is that, even though good and evil were more starkly classified at the time, people still occupied gray areas, and the system probably didn’t do them a whole lot of justice.

Now, I’m not sure exactly what Koma was trying to accomplish by destroying the seal – 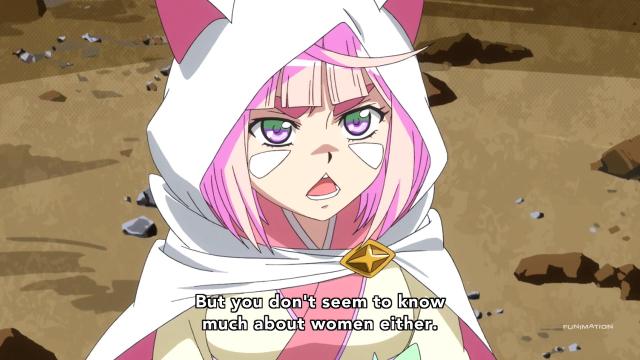 But I’m not going to let that go without pointing out that you were knocking around Warring States era Japan in a thighless suit of armor from which you could produce missile swarms.

* Koma’s addressing of the ship’s captain as Tasman puts the year at 1642, during Abel Tasman’s first expedition into the south seas (during which he discovered the land now known as, of course, Tasmania). Three years earlier, Tasman had aided Matthijs Quast (Dutch people, am I right?) in an effort to discover islands east of Japan, which is presumably when he would have encountered her.

** In real life, of course, Japan had changed Prime Ministers eleven times between 1945 and 1973 – heck, the position changed hands between episodes 16 and 17.

Things continue apace in this entertaining and intriguing episode. I continue to hold out hope that this is going to wrap up by episode 26.