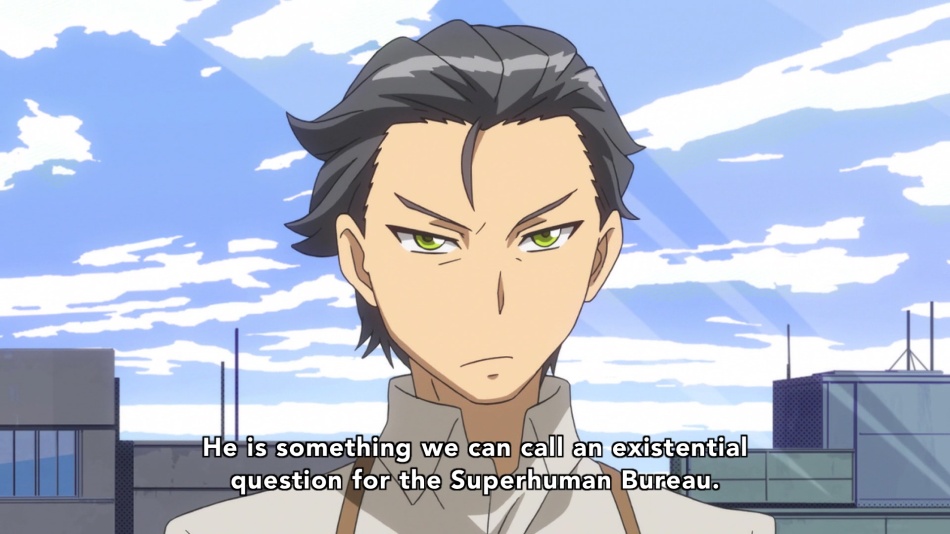 An American submarine called the Antares has returned from battle and is lauded for being the very first “superhuman” submarine ever made. The true reason behind it being superhuman sub turns out to be dark and sinister and is revealed by a mysterious superhuman named “Sword Phantom Claude”. How will the Superhuman Bureau react to this new threat, and is he truly a threat when he seems to seek justice for all superhumans?!

First of all I’d like to thank my fellow con artists for slotting me into what has to be THE CRAZIEST episode of Concrete Revolutio yet (and that is saying A LOT for this show…). At least Detective Shiba showed up again. I would be really upset if my robot streak disappeared.

A submarine is said to be returning from war and everyone in Japan is excited to talk about it. Elsewhere the superhuman pop idol group, “The Angel Stars” is putting on a concert to welcome the sub, and a student riot is trying to break in to see it. Even more elsewhere Jiro meets up with Touzaki from the Ad Agency “Imperial Ads” to discuss superhuman protection policies and what the term “superhuman” should encompass.

This episode was a good one but not a great one. For starters the narrative is all over the place. The submarine plot leads into the “Angel Stars” concert wherein the mysterious and powerful “Phantom Sword Claude” shows up. He slices the submarine in half and disrupts everything. Detective Shiba is at the concert to control the riot and he and Claude end up fighting. Shiba gets the metal stuffing beaten out of him and Claude takes off but not before we get dialogue that allows us to understand that he and Kikko know each other. We also get a discussion with the Bureau Chief and some politicians regarding recruiting superhumans for war. Later in the plot we get a crazy encounter between Kikko and Claude, some hints as to how they may know each other, and a revelation about Kikko’s true destiny (maybe…sort of…?!)

The animation takes a nose dive in this episode and while some of the fight scenes are still beautiful it’s kinda disappointing how ugly a lot of the other shots are. In addition to this the show has a VERY DARK moment when Claude reveals the reason the Antares is called a “submarine powered by superhumans”. Tonally this was an odd shift from the rest of the episodes we’ve seen. There’s been dark topics but this was a little more grotesque in nature. I was kind of thrown off at how the show tosses this point in there and then doesn’t really dwell on it.

All that aside, the episode has incredible dialogue and discussion of a brand new concept we have yet to encounter when talking about superhumans; race. When Jiro meets up with Touzaki she discusses with him that they are only at odds with each other because the Superhuman Bureau is too liberal with the concept of “superhuman”. She states that only humans should be protected. After all, isn’t the progression of human evolution where we get the term “Superhuman”. Why should robots, aliens, demons, etc be included in this mix?! This is a tough question for Jiro and ultimately…for us the viewers. While it’s easy to say “Sure! Include everyone!!” in a fictional setting, this exchange of words forces us as viewers to think about our own biases and the ones that exist in society as a whole

This discussion is taken a step further in the fact that Claude is apparently a demon. Jiro wants to take him out and claims that his status as a demon makes him less humane, but Kikko counters by sternly reminding him that she is a witch (which is totally NOT human). It’s an incredible new layer to the already eclectic discussion one could have regarding Concrete Revolutio.

Another amazing point is the way Claude argues for what Superhumans should fight for. Up until now, we’ve never really had much of an understanding of what superhumans…want. A lot of ideas come out the Bureau’s mouth (they want Peace (Rainbow Knight), they want to just be left alone (The Family that Lives Forever)), or Detective Shiba’s mouth (Justice McJustice Burger, but only if it’s MY FLAVOR OF JUSTICE). We haven’t gotten a superhuman who really wants things/ideals not only for himself but for other superhumans. It cements the idea of superhumans being their own race or culture or hell….species.

I’m going to be a bit hard on Concrete Revolutio Episode 11 because I expect a lot out of this show after this many episodes. While Episode 11 discusses some amazing ideas it also artistically falls apart and in terms of narrative is quite a mess. It looks like the next episode continues with Claude so here’s to hoping we get more answers soon.