A mysterious man returns from the south, apparently thinking that the war was still on. Bombs are going off in airports and train stations and nobody knows who the culprit is. A young promising police detective was killed by an evil organization and now his consciousness lives in a robot who works on superhuman cases. The past and the future continue to intermix as Concrete Revolutio spins more of its tale

Concrete Revolutio is a show where episode’s play out in a “Memento” kind of way and you are never sure how everything will come together. As such I feel it’s important to note that the following review contains full spoilers for this episode.

Stop me if you’ve heard this one before. So a police detective walks into a static tv set and says…ouch…because he’s a robot!!! Get it!! It was funny…laugh…

We are started off with a television announcement that a man in the south who was fighting a long ended war has returned to Japan. The camera pans to a blonde man in a white coat whistling a tune to himself as he walks away from the airport where said plane is landing. We are then swung around to a bomb going off in a restroom of an airport. The police are trying to investigate when detective Shiba notices Jirō and company walking around in the background of a news report on TV. Detective Shiba possesses a metal arm and after trying to pry information out of the Superhuman Bureau we learn that he is in fact a robot.

The real detective Shiba was murdered by an evil organization and a scientist (who is not named) decided to take his consciousness and implant it into a robot…for fun. Shiba and the Superhuman Bureau butt heads constantly because Shiba believes there are no such things as “Heroic Superhumans”. He believes all superhumans are evil and must be stopped/eliminated. We are then given a discussion about how the employees (both former and current) from the Yatsuka company are being targeted by the bomber. It turns out that the Yatsuka company makes war robots and sells them to other countries. It is then theorized that the culprit may have a vendetta against the Yatsuka company.

If your head isn’t mildly spinning right now, I’m not sure what kind of anime you are accustomed to. It’s clear with Concrete Revolutio that the plot is going to be crazy and the details don’t matter. This is not necessarily a bad thing, as we get to see brand new members of the Bureau in action and the entire episode is well written and artistically sound. Jaguar comes into play for the first time. He’s basically The Flash (he can move super fast) and he can stop time for a short period of time within a fixed distance. He’s awesome and watching his powers play out adds to the dramatic movement of the art in this show which is one of its highlights. There’s also some woman with a scarf that can turn into a kitsune spirit(?) that can follow people unnoticed. She doesn’t have a name yet and she only appears for one scene but I am intrigued by her ability and how it will feature later on.

Detective Shiba inevitably encounters a young girl who turns out to be the culprit. Even more of a shocker is that she is also robot! Shiba attempts to destroy the female robot and is injured in the process. When he wakes up we hear a story about how back in the war, a company called Ikuta Laboratories made a male (Type B) and female (Type A) robot. These two robots were designed to seek each other out and were meant to merge into the “ultimate weapon”. Later on all androids (human bots) were made using this Type A and Type B design. Shiba goes off to find the female android Mieko and destroy her before she can become a bomb. Once found he makes Mieko understand that she is one half of a destructive weapon. Shiba seems to relent on the idea of destroying Mieko and tells her that if she stays with him she won’t become a bomb. She chooses to throw herself into a lake and seemingly self destruct.

We are brought to a scene where a man is confined and riding in a car. He is broken out by the blonde man in the white coat. This man reveals himself to be the former Detective Shiba. He brings the man to a water treatment facility and opens a locker where he reveals that the Type A female robot Mieko survived. It turns out the man is the Type B robot!!! Shiba requests that they merge so that he can “wake up Japan because it has rotted away since the war”. Shiba seems to have lost his definition of justice after so many young men died in the war. Jirō appears to thwart Shiba’s plans but still allows the two robots to merge. They do so and form Android Megasshin, a robot with a profound sense of justice. The episode ends with Shiba duking it out in spectacular fashion with Megasshin and Jirō.

This episode contained a lot of action and the jumping between times are harder to follow. It made the entire thing a puzzle where you were trying to align everything until the very end. One of the best things about this episode is that it’s fun to watch twice. The understanding of who everyone is makes it fascinating to see the little clues that the episode drops early on, that could have led you to understanding it all.

This episode also throws some vital information about the war (they haven’t given an official title for it yet) and how some of the Superhuman Bureau have ties to it. I really hope this gets expanded upon more as the show goes on as we need to better understand what makes Jirō abandon the Bureau for the sake of his own ideals. While Concrete Revolutio is by no means deep, it brings up ideas about machine based “Justice”, machine “Consciousness”, and the destruction of morals due to war. All this for the low low price of 24 mins. Artistically this episode was great. The final battle in particular has the “Kill la Kill feeling” with large scale explosions and angular battle shots. 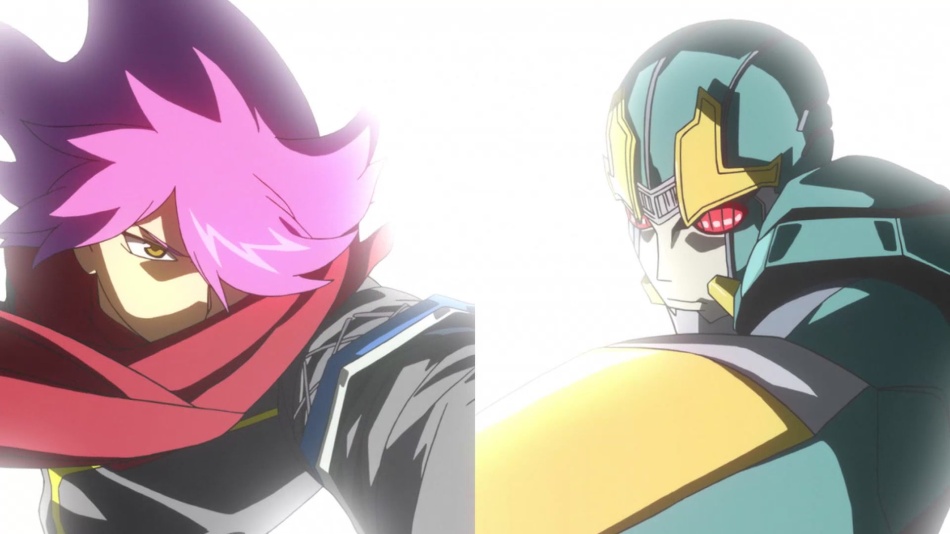