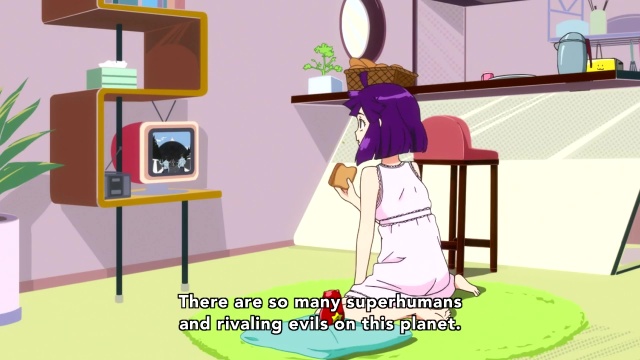 In this episode we’re introduced to another main character, Fuurouta, a ghost boy.  In this world, “ghost” means being able to phase through anything except people (and objects wielded by people, it seems), as well as turning into just about any shape, most often used by Fuurouta to turn into different animals.  He meets and immediately falls in love with Kikko, and decides to join the Superhuman Bureau once he learns that she’s in it.  The Bureau doesn’t really need a new member, though, and he decides to prove his worth by getting rid of a Black Fog that has settled over the national government building.  Little does he know the effects of what he’s done, and the show once again uses  a method of jumping between the current day and the future to tell that story.

Concrete Revolutio continues to rocket forward, telling a complicated story from many viewpoints and time periods.  More details about the world are being filled in, and it’s quite a setup. For one thing, we get this interesting quote from Jiro. 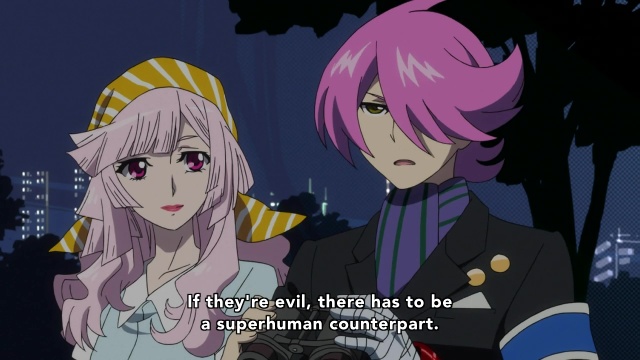 The girl on his right, Eimi (another member of the Bureau and apparently a “monster”), agrees, saying “Yes, those are the rules”.  Apparently, whenever an evil force arises, so does a superhuman at the same time to counter it.  It’s unclear, but it seems like the Bureau tries to combat the evil and assist the superhumans, though keeping the public from noticing appears to be an even higher priority.  Still, their methods can be brutal, as this episode well illustrates.

It focuses mainly on Fuurouta, showcasing his nifty abilities and disposition (a generally nice kid with a mischievous streak).

He likes playing with kids, but many of the areas he played with them are now construction sites, and most of the ones he remembers have grown up, as he never ages.  It adds an interesting dimension to him, and gives him a bit of a serious side that I wasn’t expecting, based on his normal behavior.

As he immediately falls for Kikko, he spends the episode trying to convince her to give up on Jiro (who she is now firmly in love with), since he and Eimi apparently live together.  Kikko already knows this and throws a bit of a tantrum, exclaiming that it would be strange to quit the Bureau now – already there’s some strain on the team, and we haven’t even seen them do anything yet!  This definitely seems like the kind of show where emotions are going to run high.

When Fuurouta decides to prove himself to the Bureau, he decides to help stop the Black Fog that has enveloped the Diet building.  It’s quite the dangerous fog, as it has already killed all the superhumans on the Public Security Force (another interesting tidbit the show throws out there).  So when Fuurouta gets word that the Bureau has created a potent virus from giant insect corpses found before the Great War in South America, he decides to use it on the Tartaros Bugmen creating the Fog.  The preceding sentence is a good example of how rapid-fire the show’s plot points come; there’s never a moment where things slow down.

The virus works, the bugs are killed, and the Fog is dispersed.  Crisis averted, everyone’s happy, right?  Well, here’s where the show continues to throw some powerful curveballs.  Fuurouta also befriended a talking beetle early in the episode (seriously, sometimes it’s best not to think too hard). 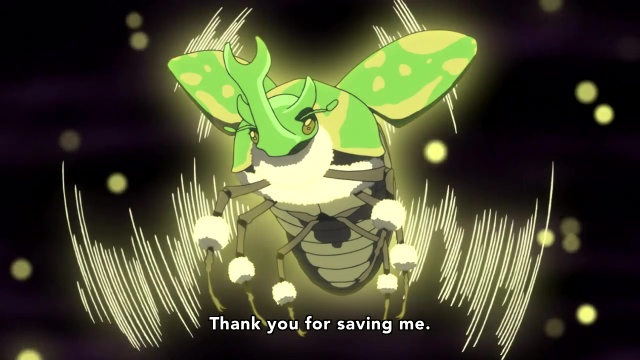 Unbeknownst to him, this beetle is the Queen of the Bugmen, who are here on a legitimate mission to complain about Japan’s politicians breaking an ancient pact not to develop the national forests (granted, their murderous methods probably aren’t striking the right tone).  Throughout the episode, we see flashes forward to the future, where a much older Queen confronts Fuurouta. 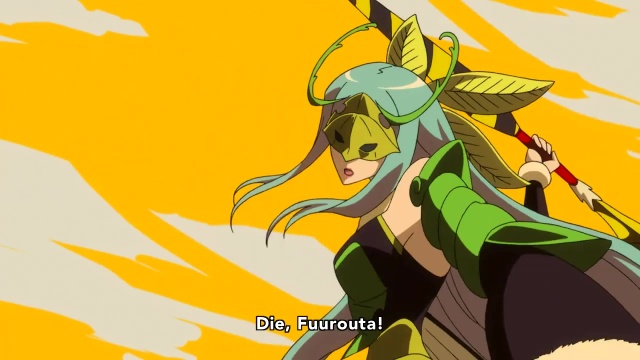 She’s vengeful because Fuurouta’s release of the virus killed all of the Bugmen, leaving her as the sole survivor.  I can honestly say I was not expecting genocide to be a topic that came up in this show, but here we are.  Jiro is also there, and as in episode 1, he now opposes the Bureau.  Fuurouta and Jiro talk things out with the Queen, and Fuurouta, understandably distraught, sobs to Jiro that the world has become too complex. 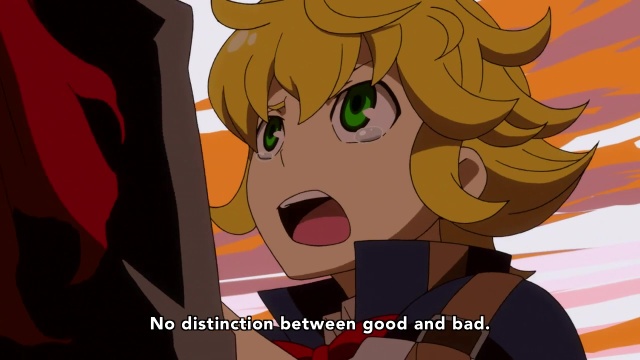 It’s increasingly clear that the current-day “rules” and the understanding Fuurouta and Kikko have about the Bureau’s mission will be challenged at some point, leading to a future where the supposedly “good” things done in the Bureau’s name turn out to be much more morally questionable.  Already we’re seeing a bit of this – why else did the Bureau create that virus, if not to exterminate the Bugmen?  Fuurouta may have released the virus, but he was simply enabled by the Bureau.  Already, I’m intrigued by where this show is going, what event causes Jiro to leave, and where all of our characters will end up.