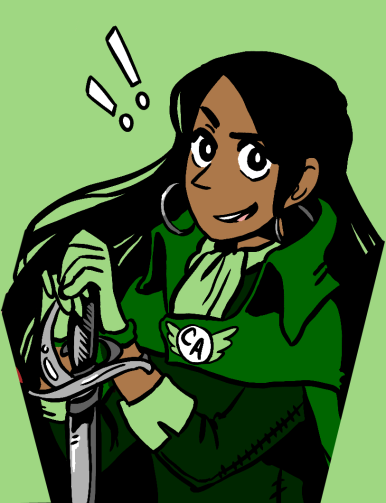 Sushma is the Lieutenant of the Lupin III airship and fights alongside her fellow Con Artists to prevent the masses from watching trashy fan service laden anime, and steer them to path of fabulous plot/character development.

I grew up watching Sailor Moon on UPN 9 (yes I seriously just referenced that) when I was six years old.  I also had numerous movies courtesy of my mom that were made by Toei Animation, so my exposure to anime was relatively large without my knowledge.  I continued to follow anime on good ol’ Toonami (hell yes, more Sailor Moon!), but it wasn’t until high school that joined an anime club that I began to realize what the medium was all about.  The club opened up my anime world beyond the realm of Cartoon Network (wait…there’s uncensored Sailor Moon?!) and I eventually became president.  I started attending conventions and began to realize how big and crazy the entire genre of “anime” was.

Jump ahead years later, and my college anime club blew my mind.  I was yanked out of the cut/censored/dubbed anime I had grown to know and pulled into a world of subtitles and “real episodes” (wait…there’s uncensored Card Captor Sakura?!) of anime.

I joined my college convention as a volunteer and eventually transitioned to Guest Coordinator.  It was around that time that the Con Artists began forming.  I joined up with the Con Artists during my junior year of college (2009) and have been a proud member ever since.

I am now an even bigger anime geek thanks to fansubbing groups, RightStuf.com and meeting various other people like myself to keep my love of anime going.

I have a huge soft spot for Magical Girl Anime (did I mention I love Sailor Moon?!) and anime about idols (hell yeah J-pop!), but I can always be convinced by a good fantasy or mecha anime.  I seek anime for the fantasy and colorful filled adventures it takes me on!!

I’m a big fan of character driven story telling.  I want some fine quality drama!  I also absolutely love to yell “English!” whenever I hear Romanji being used in a show or OP/ED song.