Episode Synopsis: Tensions between the residents of Shantytown and the government rise as provocateurs push those protesting the ward’s surveillance towards violent confrontation. Ran and his crew form uneasy alliances and begin manipulating residents’ newsfeeds to sway them towards voting against the Hazard Cast system. As Tsuzuragawa begins to recover, she reveals the secrets of Carneades and the KANAE system to Shuta, along with the dilemma of how to stop it from creating more deadly scenarios. Episode Review: (With apologies for the delay and spoiler warnings as we approach the last few episodes of the season) Episode 10 is focused on putting all of our characters into their proper places before the finale, making sure that everyone is finally operating with more or less the same amount of information. Ran and his crew have fallen in with not only 0th, but also the mobsters that were previously trying to disrupt the 24th ward to push the mayor’s schemes. Shuta is grappling with whether his heroics can actually change the course of the neighborhood as a full confrontation between Shantytown and SARG seems inevitable. Last but not least, Kouki has resolved to prevent Asami’s pain from further affecting the Hazard Cast. I’ll be frank, folks – this episode bored me to tears. Half of it is characters discovering things we’ve already learned about from a flashback episode that was already pretty redundant in terms of plot details, and the other half is derivative “both sides are going too far” nonsense that makes it hard to sympathize with anyone in the cast. Ran’s crew has become particularly grating to watch as they just don’t have enough going on to be fun, and the fact that they can’t tell that 0th has gone around the bend is hard to believe. 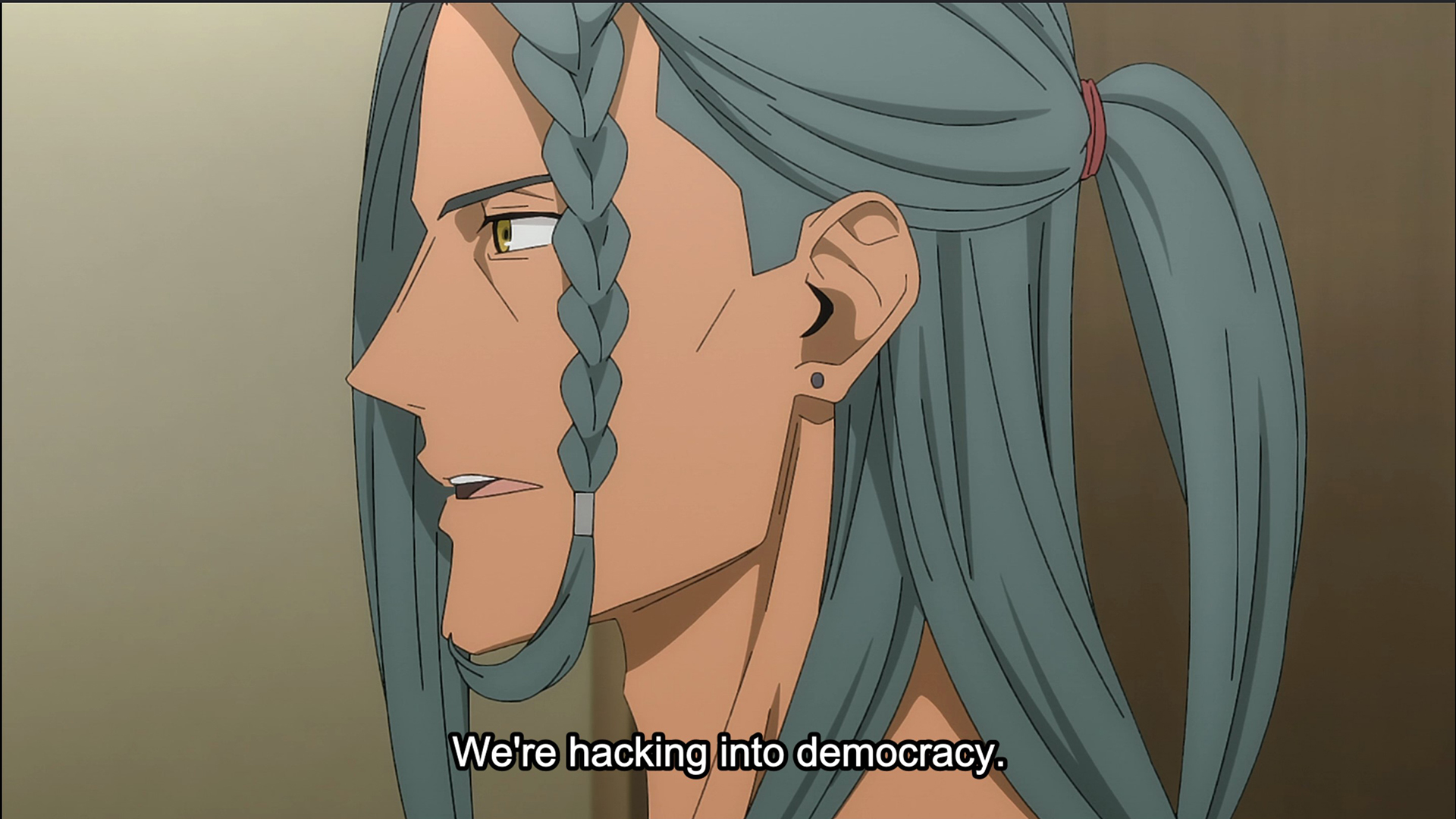 This bums me out, because there’s a strong core conceit to the show. Hazard Cast’s ability to predict and rapidly respond to accidents and crime is undeniably beneficial to society, but its push into wider surveillance asks some great moral questions. The problem is that Tokyo 24-ku doesn’t seem interested in those at all beyond a surface level, and forces those elements to share space with the far more bonkers question of, “what if our surveillance system was the soul of a dead girl who causes disasters?” Like, the system already has deep ethical problems without invoking necromancy. It just doesn’t seem like they’re exploring the real implications of the surveillance state they’ve created when they can foist any negative consequences off on a small number of bad actors or, more often, a literal ghost in the machine.

In spite of my frustrations, I do appreciate that we’ve seen the whole arc of Hazard Cast moving from a theoretical technology to realization and saturation before it became clear how dangerous it was. Tsuzuragawa creating a fake persona to cover for flaws in the system is a really cool beat, and helps to show that everyone is trying to head off danger in their own way. Shuta is reactive and deals with problems in his extremely direct way; Ran works behind the scenes to influence the masses; Kouki tries to change things from within the system, but has few scruples about breaking the rules to achieve his goals. How these characters respond to the changing landscape has been decently entertaining. Summary: Tokyo 24-ku still has potential, but the recent slowdown in the plot and lack of more interesting/critical material around their core technology makes it tough to recommend at this point. With luck, the finale will bring back some of the punch from the first episode that made us interested in the first place.