After scrambling to acquire a specific variety of sweet cabbage for Mari’s Gourfest entry which Mon Jungle’s goons had bought out, R, G, and B attend the event with confidence that their friend will emerge victorious. They were aided in their quest by their former teacher, Mr. Shirakaba, who is an official at the event and who has learned of Mon Jungle’s actual plan to simply rig the voting system. Undaunted by threats to himself and his family, he publicly exposes the scheme, but it is at this point that the guys get another round of phone calls with a vision of disaster and a dark choice. In the face of a tornado striking the small island venue, the main bottleneck to survival seems to be the bridge, and Shu is immediately set by both of the others to clear it off. Unbeknownst to each other, Koki and Ran take opposite tacks on the choice given in the call – Ran hacks into a fleet of nearby automated container trucks with intent to bring weighted shelter in, while Koki begins convincing the attendees to evacuate. They meet in the middle, hampering the effectiveness of either plan, but Mr. Shirakaba helps them make the most of the situation. Unfortunately, his daughter is caught in the open when the tornado hits, and he ends up making the ultimate sacrifice to help Shu save her.

There is some interesting setup going on here, mostly in the overall sense of the guys being prompted to learn that they need to COORDINATE. Having said that, I feel like this is a weirdly-structured episode. I guess having Shirakaba the elder thwarting Mon Jungle’s terrible plans back-to-back (and his calming influence during the fiasco on the bridge) highlights the kind of support that RGB is going to miss in the coming episodes, but man, those were some poorly-executed plans. Going forward with rigging a vote when you know that the person overseeing the count knows about your plan is some sort of hubris, and RGB tracked down the hoarded cabbage before we even knew they knew it was sold out. Perhaps the weirdest part about that whole setup is that the two goons managed to figure out that Midori-Hime cabbage is a crucial ingredient in Mari’s special (which RGB very awkwardly exposit for the audience), and then take initiative to commandeer the supply without the permission of their boss, and actually with his disapproval after the fact. I hope Koki’s assessment of their destroyed reputation is accurate, and we’ll never see their stupid faces again – 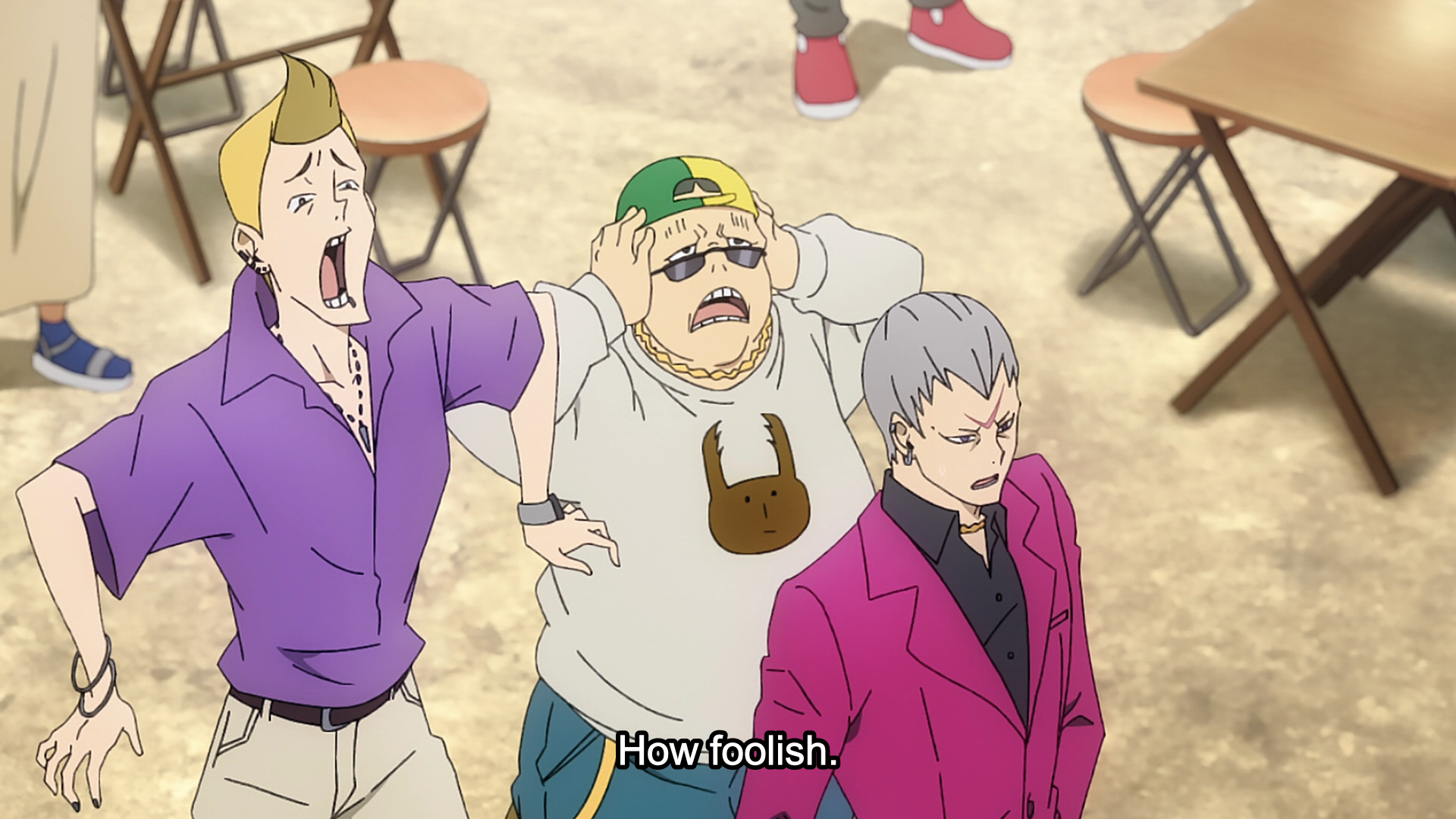 …but I also can’t say I’m enthused about the face that looks poised to replace them as the primary antagonist: 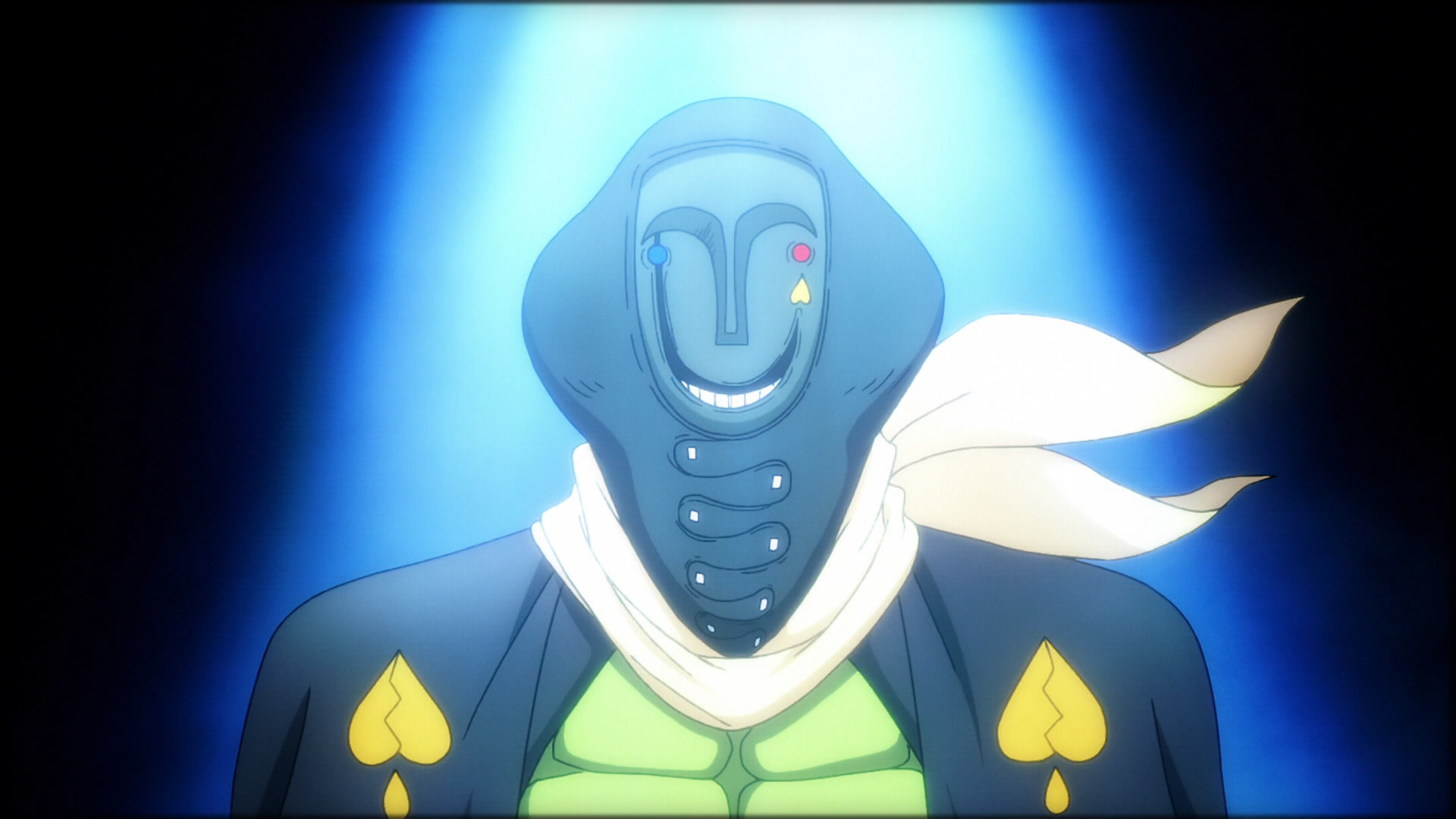 This certainly isn’t the avatar I’d use if I were threatening a city with acts of mass destruction. At this point, I’m most interested in what’s going to happen to Kozue, who has already spent the last year in a deep depression after surviving the school fire at the cost of Asumi’s life. With history repeating itself, and her own father taking the fall this time? This is gonna get way worse before it gets better. On a lighter note, in what universe does anyone eat pizza like this? 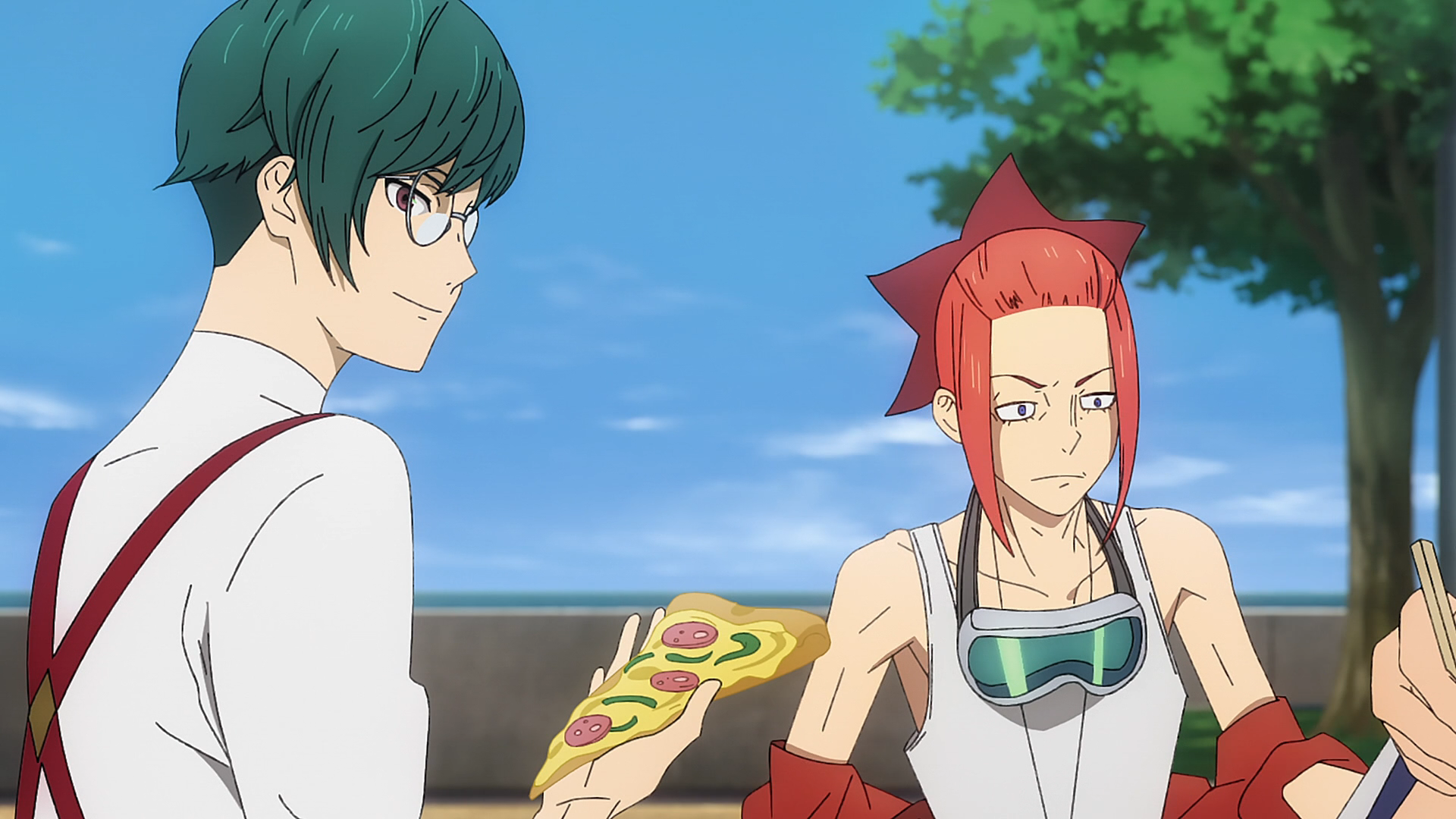 Some questionable design designs, but I’m hopeful to see some development in personal and group drama.