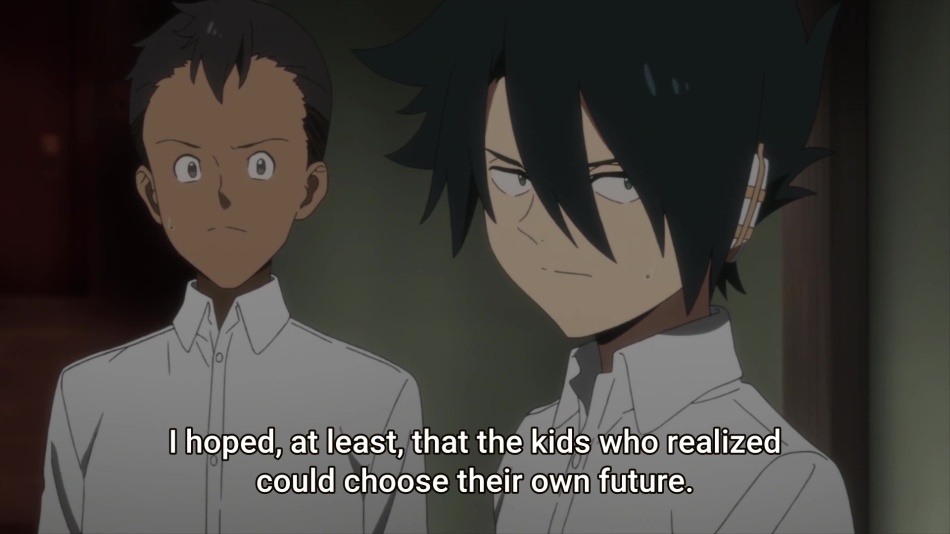 The children begin settling in at the shelter: training with their bows, hunting for and growing food, and keeping an eye out for demons who might be searching for them.  A human assault team from the Farms takes them by surprise, however, and they are barely able to escape, their new home already lost.  Meanwhile, the demons offer Isabella, currently held in a prison, a chance at freedom if she can recover all of the runaways.

Man, these kids just cannot catch a break, can they?

It’s an episode that does answer a good number of questions about the world.  Mr. Minerva is a pseudonym, and is long dead, though his legacy of shelters (plural!) for runaways persists.  Earth and the demon world have indeed been separated for over a thousand years, and the deal to let the demons farm human children is real.

There is some physical location at which the children can, theoretically, cross over to the human side.

At the same time, however, a whole host of new questions have come up.

And perhaps most pressingly… where did you kids find lemon wedges?!

I don’t think we’ll get the answers to all these questions, but it’s interesting to try and fit everything together in my head.

Another thing I’ve noticed is that the second season seems to rely a lot more on luck to help our brave kids than clever thinking and preparation, which seemed to be the case in the first season.  Back then, both sides were clearly defined and had mostly known capabilities.  When Krone showed up, it was a huge deal because of how it changed the balance of power between the kids and the adults, and how it changed the kids’ approach to getting information and trying to escape.  Now, every episode features the kids stumbling from one situation to the next with little agency of their own – Get attacked by a monster, saved by a demon, hunted by the demon, saved by Sonju.  Hide in the shelter, get attacked by a bunch of armed humans, luckily escape without getting shot, get saved by a gigantic wild demon that luckily was nearby, luckily attacked only the adult humans, and luckily was vulnerable to arrows when bullets did nothing.

It does a good job at emphasizing how dangerous and randomly lethal the outside world can be compared to the structured atmosphere at the Farm… but it also leaves me feeling like the kids aren’t really making any significant choices, they’re just having things happen to them and then reacting.  I find myself wishing the show would give them a chance to show off the brilliant minds that let them escape in the first place.

All of that said, the show remains very good, and a highly anticipated watch each week.  I’m pretty attached to them, and it was nice to see them get at least a small break before the next disaster.