It’s time for the school trip. Anything could happen. Will someone in our gang have a heart pounding romantic moment? Will Kyo accept a confession from a random no-name girl? Why isn’t Yuki being swarmed by lady-fans? How do you properly feed the deer?!

Episode 17 leans hard into a strength that Fruits Basket possesses: The ability to mix strong emotional moments with heartwarming fun and laughter. The gang heads to Kyoto and Nara for their school trip. Both Yuki and Kyo get a moment in the sun with Tohru. Huzzah for balance!

It’s hard to write about this episode because it’s very…all over the place in terms of it’s plot. It just meanders around as our gang enjoys their time on their school trip. I think what makes this episode so relaxing is that: (A) There’s no chance of a threat (Shigure nor Akito are going to show up at any second, and (B) Uo and Hana are there to keep the drama in check. Uo and Hana 4Life.

As stated previously, Yuki and Kyo get quality time with Tohru. Tohru eases Yuki into actually enjoying his trip and bringing back quality memories. It feels like Yuki’s mind in a constant torrid state and Tohru acts like a calming wave that washes over him. It’s lovely to see. 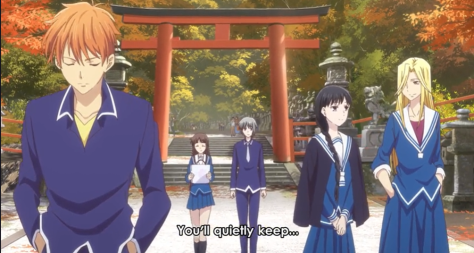 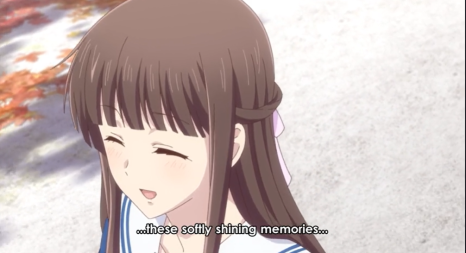 With Kyo, things are a bit more “doki doki”. Tohru is having the same inner monologue Kyo had back in Episode 10 when he openly admitted to being in love with her. She wonders if he’ll leave her behind like he does everyone else. She wonders why she’s so attuned to his words and moods. The triangle may be collapsing here and Kyo looks primed to win the prize. [Can everyone hear Scott gleefully dancing around in the background?]

The other elements of this episode are just good ol’fashioned fun. Uo and Hana have their adorable banter. Kyo gets confessed to and what follows is a weird string of insanity/hilarity. Then Uo tries to feed some deer. Seriously…it’s amazing.

The winner of this episode though HAS to be the Yuki fan club. So picture this. Uo asks the logical question of why every girl within a 10 foot radius is not cornering Yuki to confess her love. The camera then pans out and we see the Yuki fan club stating that they are A.) Preventing this from happening with their crazy, secret antics, B.) Trying hard not to focus on the fact that they are wasting both their youth and their enjoyment of their school trip “protecting” Yuki, and C.) Each individual member is trying hard not to bail on the group and confess to Yuki herself. The scene then has its own sparkly pink background and theme music. The final touch to this amazing sequence is that it smash cuts away from this scene and everything goes back to what we were watching before. It’s like we took a trip to an amazing and zany spinoff (that I would seriously watch in a heartbeat alongside “The Adventures of Love Ninja Tohru”) for like…ten glorious seconds. If you are still somehow not convinced that Fruits Basket is killin’ it this episode, hear this. This episode makes Jerkface and Queen Bitch tolerable semi-fun people. They pick on Yuki and trade barbs with each other in just a devious enough way as to be like friends. I could actually for a moment, see myself being okay with these people.

On a totally unrelated note, this episode was delightful for me personally because I have been to all the places that our gang travels to. I’ve seen the bamboo forest in Arashiyama and I’ve fed the bowing deer in Nara. Both were wonderful memories and it was so cool to point at the screen and say, “Oh man! I’ve been there!”.

As a final note: Turtle…is clearly important. Despite not wanting any omiyage, Yuki gets her a maple leaf that falls in front of him and makes him feel like he was bathed in light. 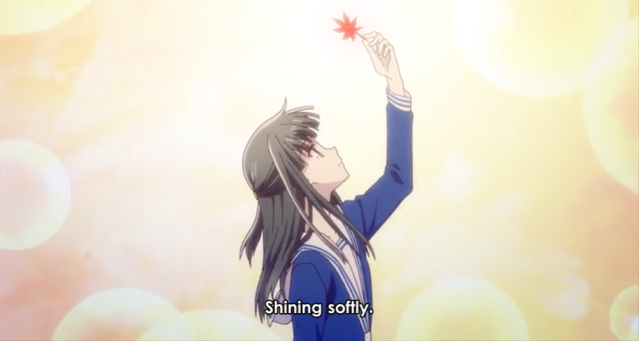 This episode is great. It’s heartwarming, it’s fun, it made me laugh and everyone genuinely gets to have a good time. It’s been a while since we didn’t have the imminent threat of angst or mental anguish for our characters. Thank goodness we got a respite this time around.