Ayame pays a visit to chez Shigure and takes maximum advantage of the opportunity to pester his brother. When he drops an offer to entertain Yuki at his shop, Yuki accepts, and the offer is extended to Tohru. Once there, Yuki and Tohru meet Ayame’s employee, who pairs off with Tohru to give the brothers time to become more closely acquainted.

Did you see the calendar? (scroll on up if you missed it)

July starts on Friday in 2022, which is a year behind the cycle, but it also happened in 2016, which would match the calendar in Hatori’s office. Once I realized that the two calendars also use the same graphical formatting, I became ready to assume that TMS entertainment – or whoever is making this show – has a stock calendar that they use for all of their background compositing, and that no reliable information can be derived from it.

This was a huge weight off of my shoulders – for approximately ten seconds, before Ayame notes the time of day by invoking “Uki-Uki Watching”. According to google, and the translation of a Japanese Wikipedia article, this was the song that opened the Morita Kazuyoshi Hour, a variety program which aired on weekdays at noon, HOWEVER: Not only has the program itself not aired since 2014, it hasn’t used Uki-Uki Watching as the opening since the year two thousand.

I swear, if anything is going to get me to hunt down the Fruits Basket manga, it’s going to be the desire to see exactly what has and hasn’t changed between it and the current adaptation. This Uki-Uki Watching reference? No doubt that it was the original line. The VHS player and tapes visible in the background of Tohru’s middle school flashbacks? Probably there to begin with. The relative dearth of cell phones? An integral artifact of the period setting. It’s the coexistence of these things with the apparent anachronisms like Shigure’s giant flat-screen, the Kanna Hashimoto name drop in S1 E12, and the touch-screen smart phones visible in this episode that cause the temporal dissonance that I’m trying to convey here.

On a tenuously-related note, I’d also like to see if the waitress outfits in Ayame’s shop originally looked anything more like the Anna Miller uniform, because I am a huge nerd who has read this Kotaku article.

The entire rest of the episode is really sweet, consisting mostly of Yuki and Ayame talking stuff out, to the point where Ayame actually manages to come off as a comforting presence before reflexively snapping back to his default persona as an enormous ham. It’s this kind of gradual interaction and characterization that give this world and its drama a grounded, organic feeling that makes them easy to invest in. 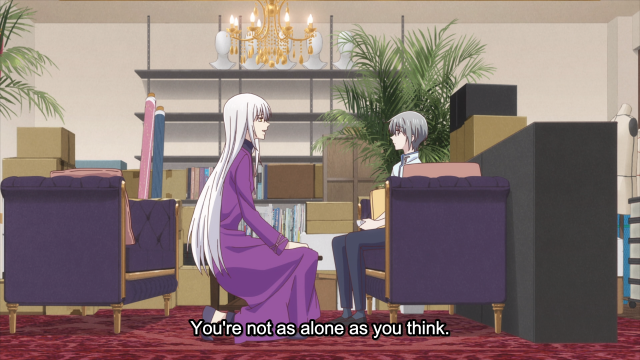 An amusing and thoughtful episode that expands and explains the world and characters, both to each other and to the audience. Good stuff.