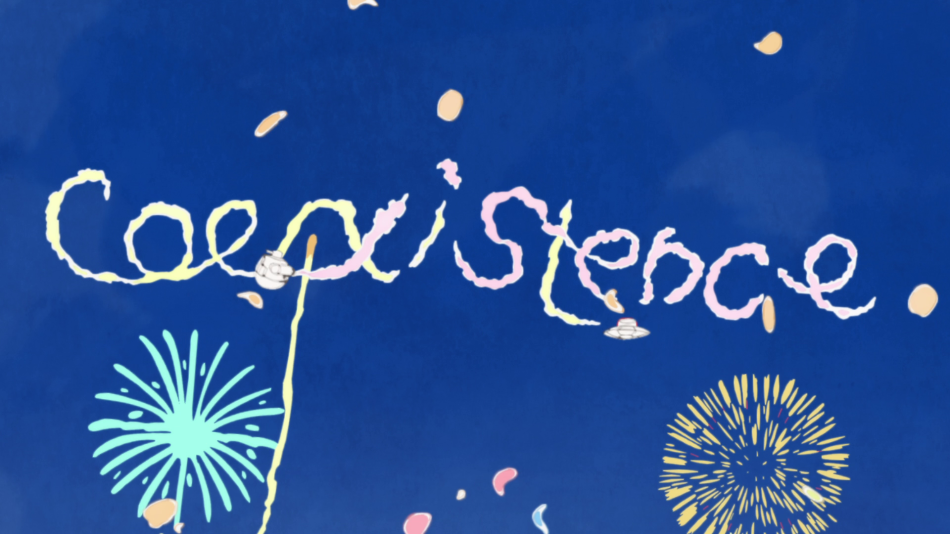 The Eizouken Club heads around the town to get the final pieces of Asakusa’s story to come together.  Time is ticking down and some of the big questions in the story such as, “Why are the aliens attacking?” and “Why the heck is there a dance party at the end?” still don’t have answers.  It’s all gotta coalesce or Kanamori’s gonna have Asakusa’s head!  Can Asakusa manage it in time?!  In addition to this, we get to the story of how Kanamori and Asakusa met.  Also…dramatic surprise ending!

Okay so before we get to the meat of this episode….

OH MY GOODNESS IT’S A SHOOTOUT!

We haven’t gotten to see the craziness that is the School Riot Club in a while.  Thank goodness Day 1, 8 o’clock in this episode the Security Club shows up and busts the Transcription Research Club in the Eizouken club room for illegal fund use.  Yeeessss!  Everything about the school and town in this show is just incredibly weird, yet it’s all played as a totally normal day.

My favorite part about this whole scene is Doumeki standing there and recording the whole thing for her sound collection.

The above sequence is inconsequential to anything in the following paragraphs.  It just made me happy.  Now…it’s time for *big boomy echoing voice* the quest for narrative.  I had forgotten that the whole point behind setting the story here in Shibahama was the revitalization and appreciation of the city.  As such, Asakusa is trying very hard to replicate the city as much as possible.

While making sure the city is accurately represented is key to the anime short’s creation, there’s a little something missing from the Eizouken team’s process.  Does anyone remember the WB show The Batman?  Shut up I’m not old… XD

There’s a scene where Bruce Wayne talks to Alfred and the dialogue goes as follows: (note: not verbatim.  I couldn’t find a clip of this to confirm the actual lines preceding the last one)
Alfred: “You never did play much as a child.”
Bruce: “I didn’t have time Alfred, there was work to do.”
Alfred: “Play is the work of children, Master Bruce.”

Years down the line, I still remember this line because I thought it was rather beautiful. Play is indeed the work of children and to get work done, Asakusa and Co. need to take a breather. Asakusa has been racking her brain to get the details of the story to come together and she’s running on empty. This episode showcases the one and only time this far where Kanamori has not been correct. The gang needs to go out and play!

And play they do! We get to see more of Shinohama and it continues to boggle the mind in the best way. The more they explore, the more they question, and most importantly…the more they imagine.  This imagination brings the final narrative’s setting fully to life.

(Where are you guys?!?!  Dear Japan, I will pay you cash-money if you bundle a map of Shinohama with the blurays of this show….)

The structure of Episode 11 wraps its way around such that all the pieces come together in the same way as Asakusa’s final story. They are seemingly disjointed until you connect it all as one. Randomly in the middle of the episode the show breaks into the backstory of how Kanamori and Asakusa met. They were both loners and a chance meeting in PE class got them acquianted. Asakusa later joins in on a money making adventure (because of course that’s what Kanamori does after school). There’s some very important dialogue here that becomes the base of the short. 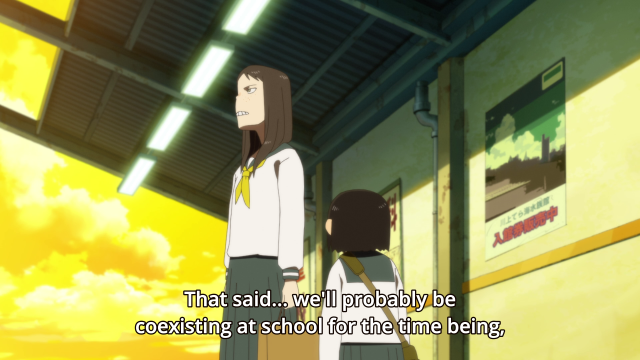 I won’t tell you how it all comes together, but suffice to say it’s incredibly satisfying to watch the efforts of the past episodes fuse together with this one to make the final narrative. Just watching the sketches relaying the final story, I was so full of joy.  We’ve weaved together all the fun of Shibahama with Asakusa’s impeccable sense of detail, and glued it together with a comraderie born out of…. 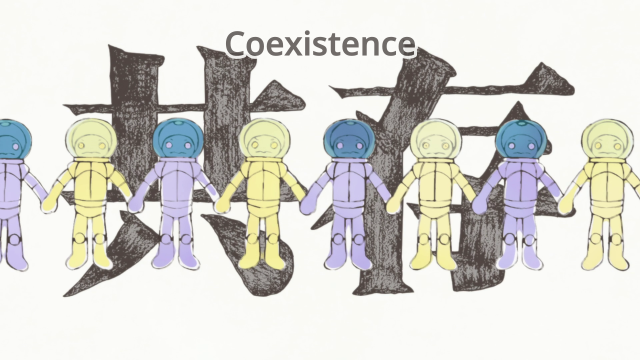 Now…for that surprise ending…
Everything has come together for our team but…there’s s snafu at the end that will leave you shouting at the screen. Somebody has swapped out the sound from the short with random piano music. How could this have happened?!

This was an amazing episode, but it was also a very tough one to write about.  The plot at first feels disjointed, and only comes together at the very end.  It’s beautiful to see all the little pieces that make up Asakusa’s final narrative and you can’t help but feel happy for our trio.  I’ll leave you all with these important notes.  (1) While Kanamoney was hilarious…I cannot begin to tell you how hard I was laughing when this scene came up.

I love you Eizouken.  Tune in next time to see who’s trying to sabotage our heroines!!!