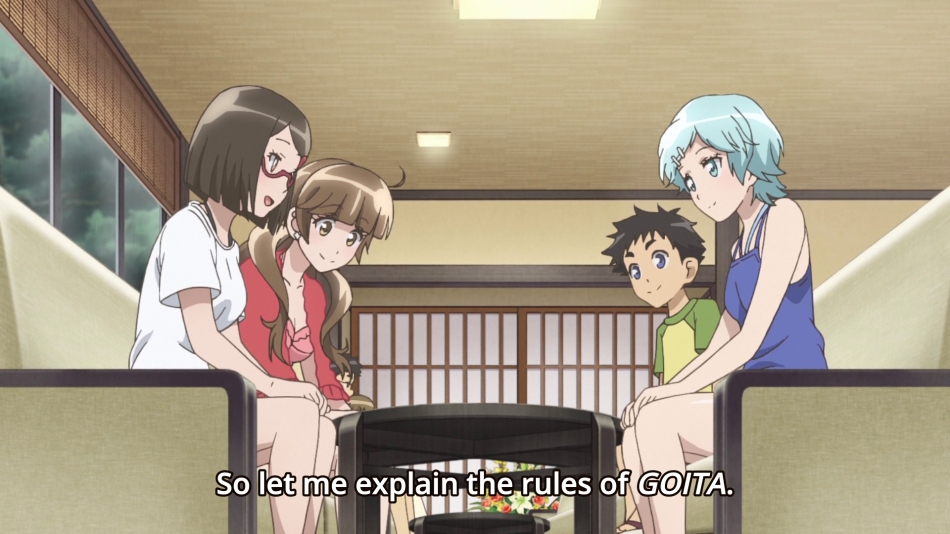 With summer break in full swing, Miki and her friends travel to Kanazawa for a beach vacation. After a delightful day of sightseeing, they find themselves stuck inside due to rain, and pick up a little-known traditional game called GOITA to pass the time. When they’re joined by an enthusiastic but inexperienced young boy, Miki recalls her own childhood struggles.

Joke’s on you – this is a show about board games, baby! And what better way to introduce a new game than a rainy afternoon on vacation? The other Con Artists and I have spent many a dreary afternoon trying out new games, so this episode falls right into my comfort zone.

The game of the episode is GOITA, a regional game related to Shogi, played by two teams of two players. Midori explains that similar games were popular in the 1800s, especially with gamblers. As new gambling crackdowns came around, GOITA and other games fell out of favor, but have seen something of a second life among board game fans. It’s little tidbits like this that keep me coming back to the show, and I’ll always appreciate Midori’s enthusiastic geekiness about obscure gaming trivia. 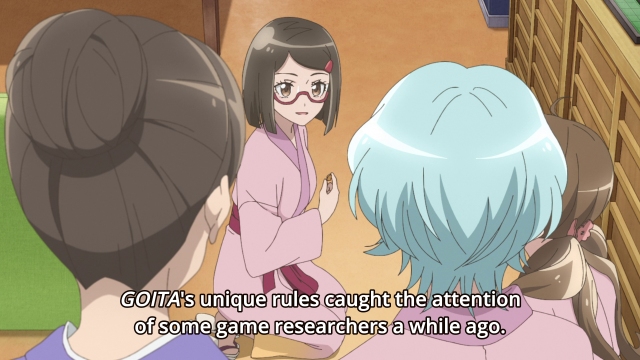 As in previous episodes, our trio needs to bring in a fourth player to make the teams even (and provide an audience surrogate to explain the rules to). In this case, it’s a boy named Takashi, and after a few rounds, he’s getting the hang of things. At first glance, the rules seemed tricky to follow, but watching the game progress, things become pretty clear.

While Takashi grasps the rules quickly, there are a couple strategies that don’t click at first. Seeing this, Miki recalls playing the same game as a little girl, and becoming frustrated when she couldn’t grasp those same strategies. 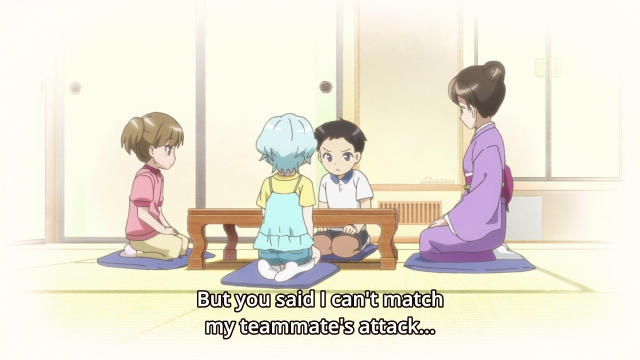 The key difference is how the other players treat the moment someone makes a poor play. Midori happily explains what they can do differently, while the boy Miki was playing with chastises her for not doing better. Sure, young kids might not be the first ones you run to for constructive criticism, but it illustrates how much of a difference a welcoming and friendly environment can make for someone just learning a new game or hobby.

Besides providing an important lesson in sportsmanship, this game also helps us appreciate how Miki has changed since she became friends with Aya and Midori. She’s begun to pick up on the subtleties of the game and takes risks to win. She’s still a shy and quiet girl, but she’s becoming more well-rounded and open to new things.

Beyond the game at the center of things, episode 5 adds some context to Miki’s upbringing. We briefly see her with her mom, and they live in a very large traditional home. Her aunt owns a beachside inn, and it’s clear that the family is very well-off. It’s also clear that her mother is very protective, which may help explain why Miki has been so closed off and risk-averse until recently. Which end is cause and which is effect isn’t quite clear yet, but it’s a nice way of building out her background without it getting in the way.

We may not know any more about Mysterious Blonde Girl yet, but episode 5 is a fun time with a good balance of character exploration, game trivia and background hijinks. I’m having fun watching our trio and their tabletop exploits, and I’m glad that they did manage to make it to the beach in the end.