Kyo awakens to find that Kazuma has already left, escorted by Tohru.  As he chases after them, Kazuma’s backstory with Kyo is revealed.  Originally taking in Kyo as atonement for treating his grandfather (who also suffered from the Cat curse) poorly, he soon came to feel as a father to him, but wasn’t sure whether Kyo felt the same way in return.  When Kyo catches up, their relationship is clarified, to the happiness and relief of both.  As the season comes to its close, all the Somas that Tohru has befriended arrive at Shigure’s house, by his request.  Meanwhile, Yuki is struggling more than usual with his troubled past, though he hopes to overcome it with Tohru’s help.

I’m conflicted by the final episode of Fruits Basket’s first season. The first half was beautiful, emotional, and featured Best Boy Kyo and his instructor, Kazuma.  Their relationship and past were something I’d been interested in since we’d heard about Kazuma, because there’s basically no one out there that Kyo is completely friendly with.

Learning about how and why Kazuma took him in, how he stayed with, trained, and was a father figure to him explained that.  It’s nice to see someone besides Tohru helping others with the trauma of being a cursed Soma member.  Because the curse is one thing, but the way everyone in that family treats the cursed is something else entirely.

Watching Kyo and Kazuma finally acknowledge each other as father and son was moving, it closed the arc of Kyo’s hidden secret nicely, and it served as the perfect way to close out the first season.

…and then there was another half of an episode to go.  Now don’t get me wrong, just because Kyo is the obvious best character doesn’t mean I’m not sympathetic towards Yuki and what he’s gone through.  There’s definitely going to be some serious episodes ahead about him and his (probably) abuse at the hands of Akito. 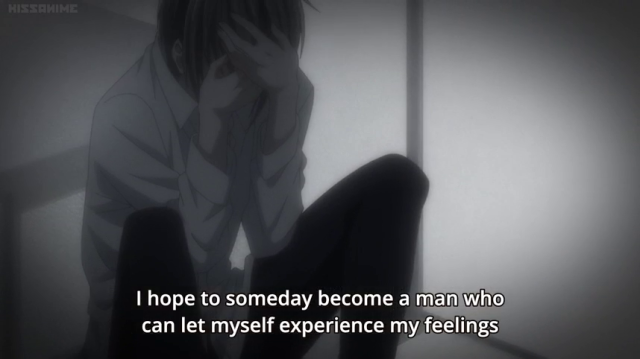 I just don’t feel that right here, at the close of Kyo’s arc and the end of the season, was the right place to do it.  I know that the show is drumming up interest in the second season, set to air in 2020, but it felt like Yuki was saying “Hey hey over here!  I have a tragic backstory too! Pay attention to meeee.”

His odd conversation with Tohru in the stairwell didn’t improve things either.  To me, the summary of what he said was “Tohru, I’m feeling bad, but with your help I can get better.  So please help me, not that I’m giving you a choice in the matter.” 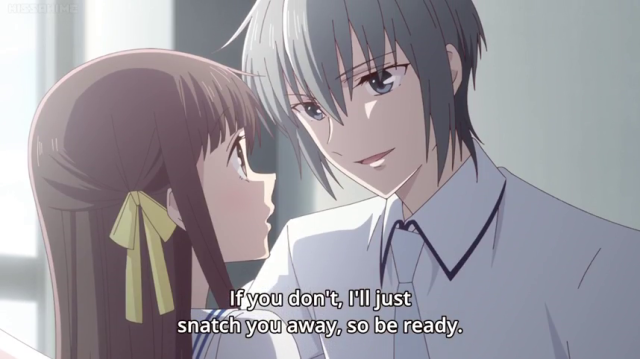 Paired with his princely kabedon, I’m sure this is meant to come off as romantic.  But with all the things we just watched him say he’s bottling up, it really feels slightly dangerous and kinda clingy. In short, this scene, and the second half of the episode generally, didn’t quite hit the mood it was aiming for, and ended up being a somewhat lackluster way to close out the season (unless Yuki’s arc is going to be about him being extremely possessive of Tohru, in which case, the show nailed it).

Nevermind, the season closed perfectly.  See you all in season 2!