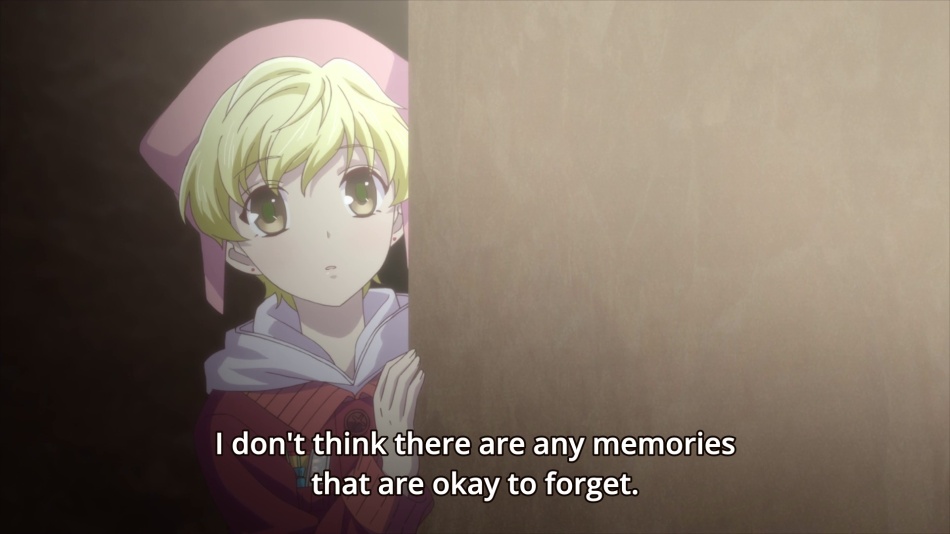 Tohru spends time with Momiji at her after-school job learns a sad truth about his mother.  It seems not everyone can handle the Soma family curse.

It’s been one year since Tohru’s mother died so Uo, Hana, Yuki and Kyo all go to pay their respects at her grave. Hana notices that Kyo is ill at ease and harbors chaos in his soul.  What is the truth behind his distress?

Episode Review:
It’s the second half of Fruits Basket which means we’ve got a brand new OP/ED. Get ready to

While there was a minor touch of heaviness during last week’s episode with Ayame, it was overall much more comedy driven. This week is serious business.  Well, not all serious business.  Fruits Basket has a way of throwing soft, fun moments in even when the majority of the episode is more somber.

I’ve made it fairly clear I don’t like Momiji. His weird “let’s-toss-random-German-vocab-in” way of speaking, and his cutesy “I’ve a five year old” act don’t sit right with me. That being said, it was sad to watch him suffer. This episode reminds us that not everyone is Tohru. Embracing someone and having them turn into an animal can be traumatizing to the embracing party. Watching Momiji’s story enfold, followed by the understanding that he’s always watching his mother from the sidelines, was genuinely rough. I feel for him now and he has an added dimension beyond “the cute one”.

I was a little surprised at first at how the show was marrying two seemingly disparate story points (Momiji’s parents and Kyoko’s death anniversary) for this episode.  However, when Momiji is monologuing about wanting to hold onto painful memories, while a flashback to Tohru crying over her mother’s corpse plays…it all came together beautifully.

There continues to be a mystery surrounding Kyo. His statement about having to hate Yuki from Episode 10 made it seem like he’s forced himself to hold a grudge for mental stability. This time around he seems like he’s repentent about something, and that something may be directly related to Tohru’s Mom’s death. I’m not going to make any guesses right now since I want to be totally surprised by whatever Fruits Basket has to offer. My theory that Hana already knows the plot still remains in play however. Suffice to say, I am amazed at how the show can swing from “soft shoujo fluffernutter” to “wow this really hurts my heart”.

The sequence where the gang visits the grave gives us more insight into Kyoko. She’s clearly a former badass biker gang leader. I love that the whole event ends up being a celebration (complete with picnic!) moreso than a gloomy outing. It also softens the pain from beginning of the episode.

This episode rolled out the shoujo feels and Momiji became more of a character. Kyo is as mysterious as ever and Fruits Basket seems determined to run everyone into the ground before things get better. Maybe we better bring Ayame back. We clearly need some smiles around here. The new OP/ED is nice and the art continues to look good. Episode 14 brings out some impressive tug at your heartstrings background music.  I was totally not sniffling…at all…

In other news…how BAMF is Kyoko!  I aspire to be 1/3 as cool as this woman was!