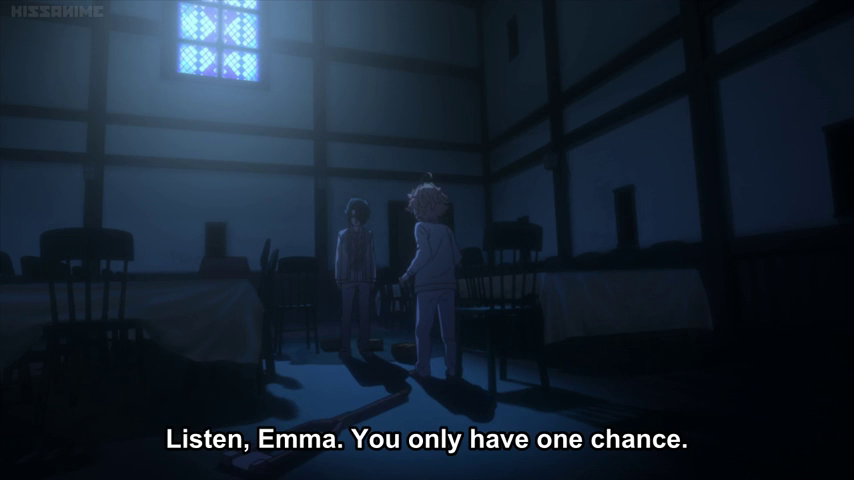 This episode is absolutely jam-packed with plot reveals and scenes that recast earlier episodes in a new light.  For that reason, it’s hard to talk about at all without lots of spoilers.  And so:

Episode Synopsis: It’s been over a month since the previous episode.  In that time, Emma and Ray have been preparing, on their own and without communicating with each other, for the escape.  At the stroke of midnight, both of their plans go into action – Ray to burn the house to the ground (with himself in it) as a diversion, Emma to save Ray and get the rest of the children out.  For once, things go their way, and Isabella is confounded at every turn by their carefully planned scheme.  As they prepare to climb the wall and escape the Farm, Isabella swears that they won’t get away.

Episode Review: This episode is bananas.  There is an absolute ton going on, callbacks to previous episodes to fill in the timeline of who knew what when, an elaborate fakeout carried through half the episode as to whether Ray was going to self-immolate, both intense action and lots of exposition.  And it was constructed perfectly.  The callbacks were to events that I remember happening.  The reveal as to what Sister Krone gave the kids was reasonable and still completely deserving of all the effort the show put into teasing what it was.  The timeline of the Ray fakeout held up after the twist.  In short, the episode is incredibly solid.

It’s also gratifying to watch the kids finally get one (or many) up on Isabella, to watch her façade crack.  It was hard not to cheer when I realized that she actually didn’t have a perfect counter to their plans ready.  For once, there’s a light at the end of the tunnel.  Of course, beyond that light is also a bunch more walls, armed guards, and demons on high alert, but that’s next episode’s problem.

The episode itself may be rock-solid, but I did have a few moments of “wait, what?” or “come on, really?” about the plot at large that this episode revealed.  For one thing, Ray’s giant stash of lighter fluid.

He says he’s been saving it up, with the plan of burning himself alive to make the very sourest grapes for the demons that don’t get to eat his brain, ever since he was little.  Setting aside what a messed-up kid Ray must’ve been… how?  How did you possibly steal this much oil without Isabella noticing?  How did you even get to it?  Emma didn’t have Krone’s key until the last month, and Ray didn’t know about it until this episode.  Plus he somehow disabled the building’s sprinkler system?  Much as with Ray’s fetal memories, it’s just a liiiitle too much to swallow.

My other moment of disbelief was the episode’s reveal of how Emma coordinated the escape while looking listless under Isabella’s watchful eye.

It’s revealed that way, way before Norman even left, she’d convinced him to bring a whole bunch of the kids into the plan, and by this point, essentially all of them are fully aware of the Farm’s dark secret and are helping her prepare for the escape.  While this certainly explains how they got everything done in time, it’s just too much to accept.  On the low end, how on Earth would razor-sharp Isabella not notice all of the kids going over to Emma all the time and receiving murmured orders from her?  How did she never notice that the really intense tag games were still going on with the kids in pairs even without Emma or Ray leading them?  Or that the kids keep going to the same place in the forest to hide food, water, and clothing for 20 people (that apparently wasn’t noticed when it went missing)?

On the high end, I can’t buy the total secrecy this plan was carried out with, even if Isabella was spending her time mostly watching Ray and Emma.  Don couldn’t keep calm for 5 minutes once he learned the secret, and probably ended up tipping off Isabella off about his involvement.  Now I’m expected to believe that all these under-ten kids can both keep the secret and not act weird around Isabella or each other for over a month? Can’t do it.  I understand that there’s not a lot of runtime left on the show, so we kind of had to get to the escape, but the time skip feels like a convenient way of suddenly hitting the audience with a lot of twists and reveals that don’t fully hold water.

Still, it’s a good episode, and one that I enjoyed watching.  By no means should my preceding couple of paragraphs be interpreted as “the show fell down at the end” – I think it’s been an extremely well-paced and plotted show all the way through.  It’s 100% worth watching.  You’ll just need a strong dose of Suspension-o-Disbelief™ to get through this one.