Between the breaking of her armor and the destruction of the sealing device in the previous episode, Torikai fell into a dream where her mentor survived getting shot. Like Nezuya, her dream is apparently too deep for her to be reached by whatever means with which Shiraishi prompted her teammates to defeat the earlier devices. Yosuke, upon seeing the will of his one-sided love bent by the seal, resolves to bring all of humanity down with her. Fueled by sorrow and commanding the last of the sealing devices prepared for the mission, Yosuke defeats Torai – and Haru & Miu (who realize their own powers after observing their comrades do without the vials on television) – and proceeds to seal the Earth.

Soya, still in the early stages of being cheered up a visiting Nozomi when the seal falls into place, is visited again by the representative of the People of Paradise, who gives him a platform to re-awaken all of humanity in exchange for him agreeing to fight the dragon. Inspired to protect his newfound friends and family, Soya accepts. Then, he, Ginko, and Sensei put the giant Sensei-shaped spaceship into battle mode, defeat Yosuke and his armored sealing device, and challenge the rest of the sealing faction to battle.

Naturally, as the member of the Con Artists least bothered by the haphazard comic relief, my turn falls on what may be the most uniformly serious episode so far. I think there are only a couple of really quick gags, and I’m not even sure about one of them:

There’s better-than-even odds that the only joke there is that Sensei is being uncharacteristically well-behaved (I’m not sure what manner of magazine he’s reading). Not that I’m complaining – I feel like most of the nonsense leading up to this point makes a good serious episode like this all the more satisfying. Planet With hits a lot of good beats here, even if Yosuke’s fight with his former teammates is a little wonky.

Something that the Generalissimo says (repeated for the sake of the audience by Shiraishi) bothers me though: if the scope of one’s psychic powers are affected by their beliefs, is that not incredibly terrifying? I don’t read as much news as I probably should, but I’m pretty sure there is no shortage of people who would wreak world-shattering wrath on this planet should they find themselves with such abilities, without even accounting for mental illness, or for those who would raise child soldiers hoping to luck into one that could do it for them. I feel like humanity as a whole has a very long way to go before such powers—if widespread—would not immediately be a death sentence.

Setting that aside (and also setting aside the somewhat inevitable similarities to a certain sequence in Gurren Lagann), I appreciate Yosuke coming into his own as a character, such as he does. Seeing the antagonist and the hero respond differently to similar trauma based largely on their support networks (or lack thereof) is not a new trope, but I think it continues to carry an important lesson. Other notes:

This dream is the first one we see, and I initially didn’t realize what was happening until the next one cycled in – it wasn’t until the re-watch that I had a chance to appreciate how dark the most-likely implication is. 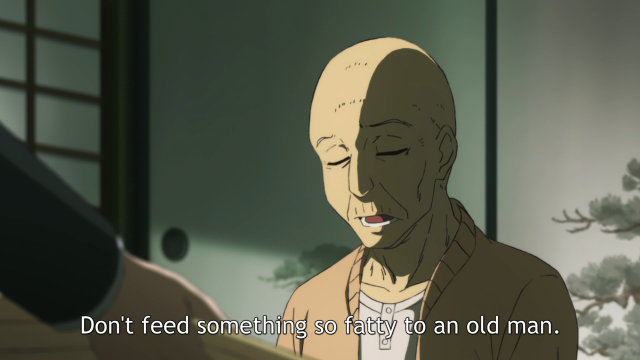 I feel like I have a basic idea of vegetarianism as an extension of philosophy, but I’m not sure if I’ve fully wrapped my head around how it’s being used.

Between this and a shot brought up in a previous episode, I feel like we have gone beyond simple resting cat-face.

Very pleased with how this one turned out – I think we’ve got a good idea of the general direction the show is going to take for its finale, and I’m still excited to see how exactly they’re going to get there.