Some time after last episode’s hangover has worn off and Soya has returned to school, Nezuya returns to the Occult Research club only to bid farewell as his family pulls up stakes. The upperclassman (club member emeritus?) is awake from his coma, but now under the effects of Nebula’s seal, which has smoothed out his personality and extinguished his DRIVE. Soya is upset by this, but it is the changes in his reactions to other things which prompt Nozo to conclude that he has regained his memories and that he is somehow connected to the mysterious objects. When she confronts him, Soya panics, but ends up giving her more details out of respect for her concern.

The sealing faction soon sends another object, which is dispatched by Toshizou(?), father of Grand Paladin’s leader Takashi, after overcoming two “trials”. The object displays further redundancy when part of it breaks away, but even after Soya steps in to stop it from reaching the town, Toshizou(?) moves in to duel the doped-up cat mech.

Meanwhile, the Generalissimo of the sealing faction moves against Takashi directly…

This show seems like it’s awfully close to a conclusion for being five episodes in. I keep wondering whether it’s just going to end next episode and hand off the broadcast slot to another show à la Shinigami no Ballad & Looking up at the Half-Moon. Of course, there are numerous ways to turn the end of this arc into the beginning of a new one, so we’ll see if the showrunners have more to say. 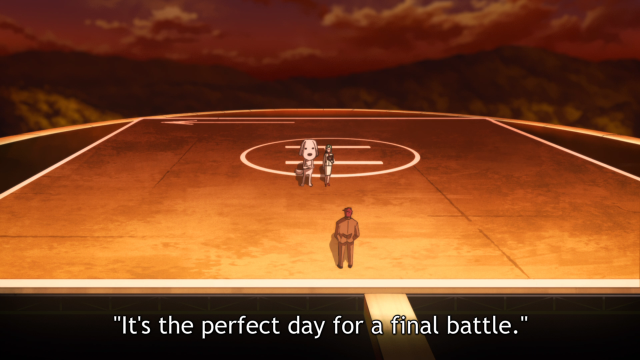 As has already been observed, the show has been pretty stingy with Soya’s backstory, considering that he himself evidently recovered his origins onscreen. I have to say that this lack of insight into the character who is otherwise acting as our proxy/protagonist (which is a waste of half of the benefit of starting a story on a character with memory loss) is so far the show’s greatest failing. I am also curious how Takatori feels she still fits into everything, considering she quit pretty forcefully last episode but is still accompanying Torai on what is presumably official business. For that matter, I wonder what happened to her dragon stardust (or Nezuya’s for that matter) – I wondered (after watching this episode) whether it might have been given to Torai, but I feel like the threat of the breakaway Nebula weapon is a scenario in which he would have reacted differently if he were on secret standby.

There’s an interesting symmetry in this episode relating to truth-telling. When Soya comes clean to Nozo, he offers an avenue of plausible deniability by immediately suggesting that he was pranking her, and that only a “goof” (in the Crunchyroll subs), or, at any rate, a word that Nozo calls out as old-fashioned, would believe such a story. This causes us to see in a new light a story that Takezo told Yosuke at the beginning of the episode. After he stated that Takashi was found by him and his late wife in a meteorite crater, he immediately dismissed the tale as fiction and chided his final armed comrade as a “goof” for believing the story. At the time, there was no particular reason to believe him, but Soya’s use of the exact same tactic for a tale that we know to be true strongly suggests that Takashi’s creepy eyes are indeed indicative of an extra-terrestrial origin.

Show’s not perfect, but boy it is moving full-steam ahead. Audio is still bangin’ (although the snake sound was a little unexpected), this week’s Nebula weapon is a definitely a step in the right direction, and I wanna see the simultaneous beatdowns next episode.