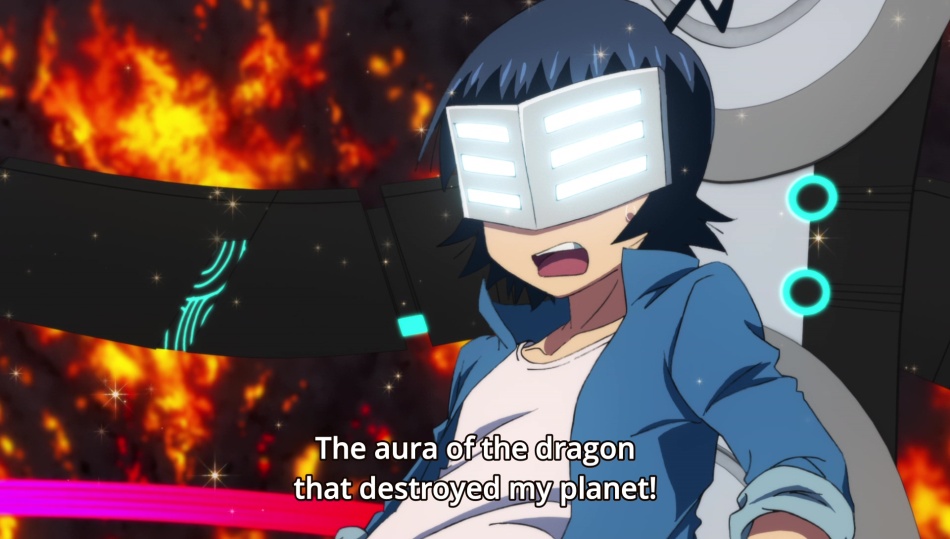 Miu has been stripped of her power and Soya’s out to take all the members of the Grand Paladin once they appear.  Despite being outnumbered he seems poised to put up a fight until the leader Takanashi reveals his super mech and almost melts him to smithereens.  Later on Soya gets roped into the Occult Research Club and has interations with the Grand Paladin member Nezuya outside of battle.  Will that shift his view on fighting the Paladins?

I’m unsure how I feel about Planet With as we hit Episode 3.  On the one hand, I like the concept of following a character who doesn’t totally fit the bill of “Hero”.  It’s neat to see an almost villian fight the people who claim to be “Good Guys”.  I also like the heady concept of the Nebula creatures nation fighting the Grand Paladins with the illusions that try to silently soothe their innermost fear or desire.

On the other hand, Soya feels like a self entitled brat who gets an overpowered cat mech and thinks he can do whatever he wants in the name of revenge.  I imagine that it is the show’s intent to break his character down a little over the course of these 13 episodes.

To start things off, I’m a touch concerned about how overpowered Soya+Sensei seem to be.  The fight against the remaining 5 Grand Paladin members is almost laughable in that even though their numbers totally outmatch him, Soya seems to be able to zip through the air and flip off of people’s faces without much issue.

His Giga Cat Hammer attack also just smashes through whatever Paladin he’s facing and it takes the Chief and his MEGA CANNON just to show any inkling of resistance.  To top it off, when Soya is down and almost out, Cat Sensei calls upon a spaceship shaped like himself that conveniently warps the Pacifist Trio back to the apartment.  I call shenanigans on that plot device.

The rest of the episode has Soya calm down as he goes back to school and gets involved in Takanagahara’s Occult Research Club.  I liked the sillyness of this and it helped to see another side of Takanagahara rather than just being Megane-sama Class Rep.  The important introduction here was Judgement Nezuya (really his name folks), who declares Soya his “friend”.  This seems to shake Soya out of his “Imma only in it for revenge yo” attitude and dig into the concept that not having any friends may acutally be bugging him.

I hope this is the thing that starts to tackle to the big issue I have with this show.  Soya needs a weakness or a moral conundrum somewhere in here for me to get behind his ideals as a character.  Since the show hasn’t actually shown us these memories he claims to have regained, we are just meant to operate under the impression that he was wronged somehow and now wants to avenge those he lost on his home planet.  The show is driving full tilt into a plot for our lead that needed…the other 10 episodes to have developed.  Maybe the show is going to go in reverse and fill in Soya’s motivation so I’ve vested in him by the end?  I can’t feel anything when the lead character is screaming about beating the crap out of people for using Dragon Power that destroyed his home world.  Make me care show…

I feel obligated to mention the massive exposition dump that occurs early on in this episode. It feels strange that we are getting so much information fed to us this early. It’s as though the show desperately needs it out of the way so it can do seemingly more important things later. I am hoping it wants to get more pyschological, so for now you just need to know the two or three factions in play. The sequence is done well, with its black and white character motif mirroring its black and white take on humanity’s nature. It’s just all paced to match a nascar racecar. Guys…calm down…it’s Episode 3.

Just as an aside…Brendan got a weird floating yellow bear thing with hands….

Dan got a piggy thing with hands…

I get unrelenting nightmare fuel.

The world is so unfair right now…

The real meat of this show continues to be the mystery surrounding what the heck the Nebula creatures are and who really knows what about the fight for (against?) humanity. I like that each Paladin get a silent phrase uttered just to his/herself after defeating the Nebula core  I hope it all means something for each of the characters. Here’s to hoping we get more development from Soya as well because right now I’m having a hard time caring about anyone on either side.

Soya finally has a reason to hesitate in his fight agains the Paladins, so hopefully that brings more nuance to this show. The weak motivations like “I got my memories back so I’m going to beat the crap out of everyone!” and “You hurt the only girl who was nice to me, so I’m gonna get you!”, I’m concerned about my engagement in this show. It feels as though the show is requesting emotions out of me that it hasn’t earned and so for now, I’m not giving them up. Hopefully we learn more as the show continues. Stay tuned for more Planet With!

As a super final note, I’m entertained at the naming scheme for some of the characters.  Hideo Torai, who lost his power in Ep 1 piloted a Tiger.  Tora = Tiger