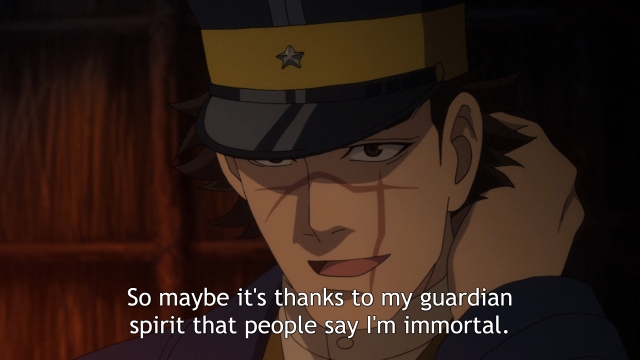 Sugimoto spends more time in the Ainu village, learning about their beliefs and customs. He eventually returns to the city of Otaru to gather more information about the tattoo’d prisoners, only to be captured by the rogue 7th Division’s sadistic leader. Frustrated with Sugimoto for leaving her behind, Asirpa and her wolf companion Retar track him into town, only to find the escape artist Shiraishi. She has Retar “persuade” him to help locate Sugimoto, who is now fighting for his life against the ruthless soldiers of the 7th.

This was one oddly-paced episode. We spend most of the first half following up on our Ainu cultural tour from episode 3, which continues to be interesting, though the delivery is ham-handed. Facts about Ainu life are pushed out in rapid succession, and there’s no natural flow to it. Even so, we get some interesting tidbits, and learn how Asirpa connects to the white wolf, Retar (whose name means “white”, creatively). 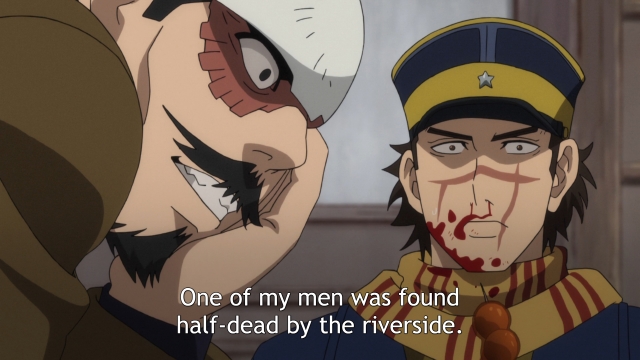 After Sugimoto heads into town alone, he’s quickly apprehended by soldiers of the 7th, and interrogated by Lieutenant Tsurumi. He’s a bit too far out there at times, but Tsurumi continues to be a darkly fascinating character to watch, clearly mad, but still cunning. He’s even willing to let Sugimoto join him, since he has relatively few men to enact his treasonous plans. Unsurprisingly, Sugimoto isn’t too keen on this, and the fierceness of the interrogation spikes dramatically.

After Asirpa and Retar run into their escape artist friend, the episode wraps up abruptly as Sugimoto tries to escape his captors. It almost feels like the second half of episode 3 and the first half of this one were planned to be one slower story in which Sugimoto is immersed in Asirpa’s village life before being thrust back into the gold-hunting adventure. This is all speculation, and the episode has a good upswing in tension throughout the second half, but it’s still jarring when it ends apparently mid-scene. I imagine our heroes paths will cross pretty quickly next week.

I’ll give credit to the creators for making me jump at least twice with sudden bursts of violence in this episode. My initial fears that the grimness of the show might be held back are certainly gone now, between people losing faces and having eating utensils stabbed into them. It does make the dissonance between the serious crime thriller and the lighthearted cultural exploration a bit much at times, but I’m still able to enjoy both in their own spheres.