As the day for the team’s departure for Antarctica grows imminent, everyone makes their final preparations.  Packing for a three month stay, a ceremony at school as classmates are left behind, and goodbyes from schoolmates, friends, and family all bring home to the girls that a big change is upon them.  Fortunately, they’ve got each other, and they’re more excited than nervous, spending the last night in town partying.  It’s a different story with Megumi, a friend of Mari’s who isn’t making the journey.

First off, a SPOILER WARNING for my post today.  All our posts talk about details from the show, but things that happen this episode paint previous episodes in a different light, so if you’re planning to watch the show, please make sure you’re caught up before reading.  Or don’t.  You do you.

Right off the bat, I’m impressed with the show’s commitment to sticking with what’s important, what’s unique, to this show.  In this context, that is, of course, getting these girls to their Antarctic adventure. Without a backwards glance, the girls are done training, it’s assumed that Mari buckled down and passed her exams, and they leave in one day (!) to begin their trip.  Sure, we could have had a bunch of filler episodes, and laughed as Mari struggled with her studies, but we’ve all seen that show before.  But just because it’s skipping a lot of time doesn’t mean it’s skipping what matters – the focus on its characters that’s really endeared the show to me.

For one thing, the show does a great job of showing that the team has become closer during the intervening time.  They really feel like a group of friends now – even if it’s mostly because they’re willing to make fun of each other casually. 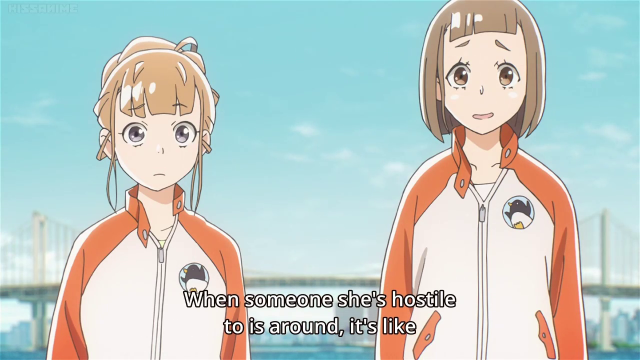 The show also has some fun at Mari’s expense as she tries to pack “the essentials” for her trip.  I’ll admit I laughed more than a few times as her sister helped her sort out the chaff.

Aside from the humor, though, the show does a great job of showing the many other emotions that come to the fore on the eve of a big trip like this.  We’ve all been there at some point – maybe graduating from school, or leaving home to get an apartment – the sense that you won’t be back, or if you will, it’ll be different somehow. An everyday routine is coming to an end.  As Mari went through this, from bidding farewell to a soon-to-be impossible luxury:

To the final moment at home, when it really hit that she wouldn’t see her room or family for months:

The show really nailed it.

And that would be enough for many shows, but Sora Yori mo Tooi Basho fit still more into an already packed episode.  We’d been seeing a bit of a buildup towards something with Megumi, and now, before Mari heads off for adventure, it comes to a head.

For the first time since they’ve known each other, Mari made a choice to do something, go somewhere.  It’s happened before, of course, but this time she’s committed.  She’s been training, working part-time jobs, studying hard – and she hasn’t had to rely on Megumi for any of it.  If anything, Megumi has been the voice of caution, of “look what might go wrong”.

And now, the ridiculous plan to go to Antarctica, coming from a girl that couldn’t muster up the courage to take a train ride to Tokyo, is actually going to happen.  Megumi has been nursing a feeling of regret and loss, of losing her status as Mari’s “caretaker”, and it turns out she’s been subtly trying to get Mari to give up on the trip. 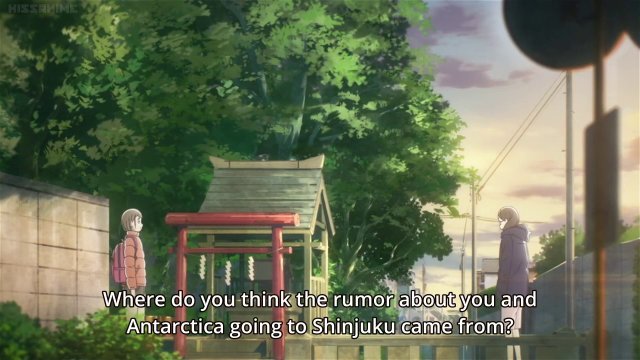 But it’s impossible to be mad at Mari – she’s following a dream, and while she may have made new friends, she didn’t forget about Megumi (indeed, Megumi was with them at karaoke).  The regret was instead turned inward, causing Megumi to want to lash out at her friend for a reason she really can’t even put into words.  And so Megumi comes clean, tells Mari about the many little ways she tried to stop the trip, and concludes that she doesn’t deserve to be Mari’s friend. 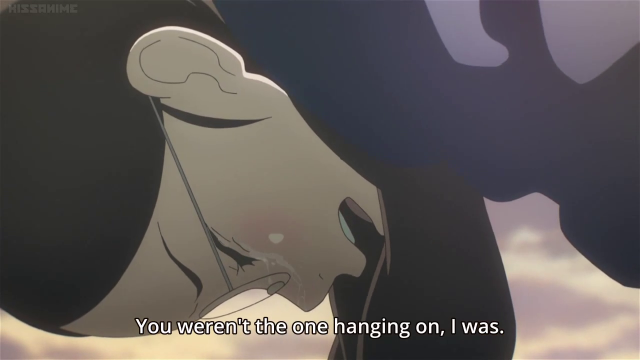 It’s a very emotional moment, for both girls, and the show again handles it exceptionally.  Megumi’s actions aren’t those of a villain, but of someone afraid of losing a friend, of having the nature of a long-standing relationship fall apart and being unable to stop it.  It’s painful to watch, but well done.

As with other episodes, there’s a huge amount of meaningful content, and I’m always surprised that everything that happened fit within an episode, and also felt naturally paced.  Now that we’ve said farewell, it’s time to head out for that distant, frigid continent.