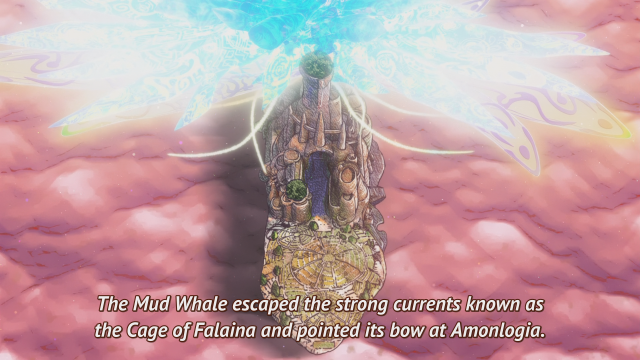 On what I assume is the imperial mothership, Orka pressures the commander of another nous ship into letting it be used for another Falaina mission, and reveals to the audience that retaining emotions, which is indirectly accomplished by eating pieces of nous, is an aristocratic privilege that he is extending to his archivist, whom he plans to marry.  Back on the mud whale, Ouni manages to talk some sense into the twins – or at least manages to stop everyone else from taking them seriously – both before and after Suou makes the truth of Falaina public.  The marked then proceed to get a dance going so as to steer the vessel out of the Bermuda Triangle / doldrums of the sand sea, and off towards Amonlogia.

Let’s see if the show has answered any of the questions I had when I was last here.

About the “captain” – other than the fact that he seems to know what Ouni is? Nothing.

About Falaina – other than what I had already guessed? Not really. Orka speaks of some of the legends surrounding the origins of the nous, but the only important thing we learned (other than the life force thing) was that the marked can channel their dance or something through special dolphin-tailed rodents to move the vessels that the nous keep afloat in the sand sea. In the absence of one of those creatures, the mud whale couldn’t be extricated from the cyclical currents to which it was banished, which does answer the question of how the empire could reliably locate it (and man – they are gonna have a hard time now). Honestly, though, this only raises the question of how the empire moves their vessels, since what we see of the bridge of the vessel Skylos didn’t give much indication of how it was steered (dance doesn’t seem like their style), and the Kokalo-like critter that was found on the vessel Lykos has been of no concern to anyone this entire time.

Also, apparently this world still has actual oceans?  Outside of the sand sea?

About the “objective” that the Skylos soldiers were looking for on the mud whale – nothing, unless I haven’t been paying enough attention to Orka’s interaction with whatever was interrogating him to read into his actions.

About the prisoner that the bowel-moles took from the original Skylos raid – nothing again; I’m pretty sure she hasn’t even been on screen for four straight episodes.

To top all of that disappointment off, Liodari is back, as I had feared, but not because he was reanimated or transmogrified or anything – he just miraculously survived numerous life-threatening injuries sustained before falling a hundred feet into a sea of quicksand. Come on, show.

Once again, I feel like not a whole lot happens in this episode. The important stuff is mainly that Suou makes the relationship between Falaina and the marked public, and we get to see Chakuro and Lykos reaffirm their commitment to the community of the mud whale.  Beyond that…

We spend some time watching Ouni put down that mini-rebellion, but that whole thing was pretty flimsy to begin with. Lykos rejects another offer from a nous avatar person to give up her sadness, only this time it’s from Ema, and Falaina doesn’t even eat sadness – what exactly was the plan there? Orka performs some obtuse political maneuvering on the mothership to gain control of the nous vessel Karcharias, which, having gone back to re-watch the scene on the Sklyos bridge to look for controls, is where the archivist said he was during the raids on Falaina. Like… what? Also, he’s putting the moves on said archivist and is presumably giving her enough emotions so that she’ll be loyal to him instead of the empire, so we probably have some dysfunctional “romance” to look forward to.

I’m done, folks. I know there are more books and there’s probably going to be more anime, but I have checked out. Almost nothing that happens in this story is well-explained enough to make any sense and I don’t like enough of the characters to keep me invested. The show does try to go out on a good break point, but that’s where I’m gonna call it. Let us know if the books are better.