There is a temporary calm now as the remaining Mud Whale members have sunk the Skylos’s battleship and according to Lykos, the next threat may be a way off.
While bathing in the lakes to pray for rain (uhh…okay..), a mysterious ship appears and the leader attempts to conquer the Mud Whale? It doesn’t work. Chakuro learns a little secret about his new shrimp platter and elsewhere, Lykos’s brother is talking to clowns.

Warning: This review is NSFW for some of the images below (nothing objectionable, just naked people).

Okay…this is it guys.  Whales is super officially a lost cause as you can tell at this point, half the staff has gone mad and is contemplating seppuku, and the other half is desperately trying to do…anything to get the show to move along and have appeal.  Let’s take both halves.

The “Save the Boat!” staff has decided that in this week’s episode…there’s going to be fan service.  Yes you read that right.  Fan service.  As the show is desperate to world-build, it adds yet another strange tradition to the Mud Whale’s repertoire, but this time it involves nudity.  We absolutely can’t be a fantasy world and not have public baths.  The bathing scene doesn’t last long, it’s the follow up that’s laughable.

The nation of Amonlogia appears, and decides that they want to take over.  When that immediately fails, Suou establishes himself as King of the Nudists (did someone let Kill la Kill in here), and uh…they welcome the people of Amonlogia as guests.  I mean…why the hell not…?  This couldn’t get any dumber…

The fan service is just pathetic at this point in the game.  My rage comes from the newly introduced characters/location.  Guys…we are three episodes away from the end of this show (I know there’s more manga to follow, but you can’t be expecting a second season…please tell me I’m right…”) and NOW YOU WANT TO EXPAND THE WORLD?!  Just stick to the conflict at hand with Skylos.  That was semi-compelling enough.  You haven’t even fully explained the whole “Sinners of Falaina” thing (unless the explanation in Ep. 9 is just…it…), and now you are introducing us to places that don’t even know about the whole “sinners” angle?!

The only important piece of information we get is from Captain Eyepatch’s mom and Ema.  Apparently Neri is just…never going to appear again.  Why did we even have her in the first place?  Captain eyepatch clearly has some sort of plotline with his demon eye (or at the very least, his terrible personality).  His mother, the Elder, hints at it, but as with all things Children of the Whales it raises questions like…”Why is this guy allowed to stay here?”.  He seems like a nihilistic psycho, but that’s okay…we are all friends here.  I’m gonna hang on to this plot point and pretend it’s interesting because I just have nothing else.

Ema reveals that the shrimp coctail that Chakuro got is secretly a steering mechanism for the Nous and so now, the Mud Whale can set a direction!!  Hooo…raaay?  I don’t know why we care about this, but it makes for a pretty light show.  Other than that we learn…absolutely…nothing…Thanks Ema.

Now…on to the staff that know this show is garbage and are prepared to thrust themselves into full-tilt nonsense.  Let’s start with this:

Why…how…could this even happen?!  He was shot twice with arrows, slashed down the front of his chest, AND fell into the sand sea.  ARE YOU EVEN KIDDING ME RIGHT NOW?!

Thankfully, it looks like he’s going to become…a jester…and honestly…that’s a fate worse than death so maybe I’ll rejoice.  As we get a glimpse at Lykos’s brother, it seems that he is awaiting repurcussions of letting the Skylos battleship sink, and he’s also…got a posse full of people in jester suits.  They are like his servants or something.  I literally can’t even right now. 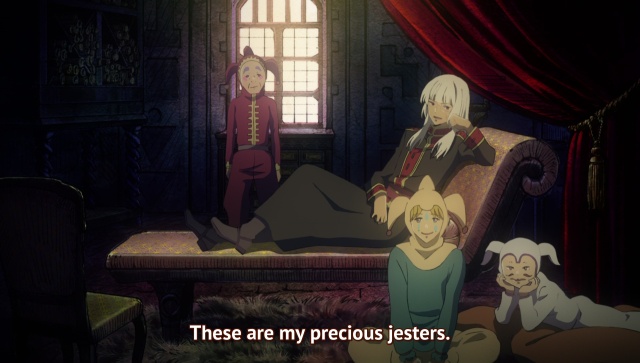 Let’s just all unanimously thank Japan for this terrible terrible show and never speak of it again once it’s finished.  I can never fathom the depths of stupid the show is willing to dive in order to keep this thing chugging.  Pure and simple: This episode is a mess.  Thank goodness my turn is never going to come up again.

4 comments on “Rolling Review – Children of the Whales (10)”