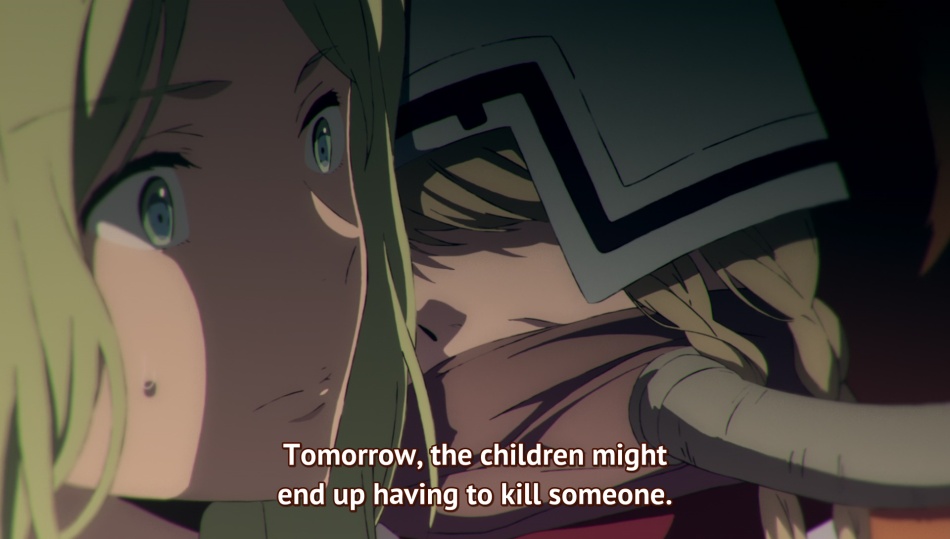 Skylos will return to the Mud Whale very soon to wipe out the remaining “sinners”.  The citizens of the Mud Whale must now prepare for battle.  After the impassioned speech from new chancellor Suou, any and all Mud Whale members with thymia are learning to use their powers for battle.  As the title of this episode suggests though, do any of them understand that they may have to kill someone tomorrow?

Warning: Spoilers ahead for Episode 6

You ever go to the grocery store and buy something you’ve never seen before?  You come home, you eat it, and you…really don’t care for it.  You’ve bought it though, and you are a conscientious person so you don’t want to throw the whole thing out.  Periodically you eat it just to get rid of it…and eventually you tell yourself that it’s…okay tasting…

That’s my take on Children of the Whales.  We bought this show so I eat it once a week.  It sure is…okay..(I’ll just keep telling myself that…)

The show has been ever so slowly course correcting itself since Episode 4, in my opinion.  That doesn’t save it from desperately cramming a bunch of stuff in and hoping you just believe it’s working.  Episode 6 has an interesting enough underlying premise.  The thymia users of the Mud Whale now have to train themselves to kill people. 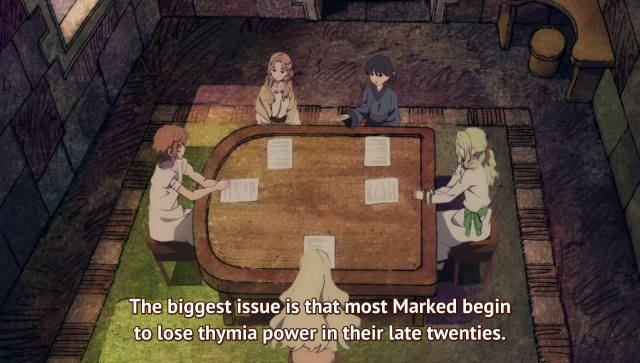 Intermixed into the episode is a whole mess of topics.  Children of the Whales never knows when to quit.  Episode 6 force feeds a budding romance plot with Lykos and Chakuro, Ouni’s backstory, a cultural festival, all in in addition to two other massively confusing plot points.

Let’s get to the bad parts so that we can end on a good note.  Show…Neri was super confusing in Episode 5.  Why the heck did you think it was a good idea to make a double of her to add more confusion?!  What is this…a soap opera?!  It was your Nous twin all alooooooong!  I’m guessing this works a bit like Rahxephon, wherein Neri was a spirit version of the Mud Whale’s Nous.  Making Emma however, opens up a basket full of questions like, “Can the Nous all make physical spirit-people manifestations?”, “How many of these can they make?”, “Is nobody else caring that they are walking around?”. The Chancellor in Ep 4 totally seemed cool with Neri just getting absorbed back into Nous Falaina, as though he knew the whole time what she was.  Do all the Chancellors know about these spirit manifestations?  Once again, the show just…does things and doesn’t feel like explaining anything.  Regardless of how I feel about Neri/Ema, the show just infuriatingly dodges any questions Chakuro (and you the viewer) have and just flies around laughing maniacally.  Great….

At least she promises to tell Chakuro all the secrets of the Mud Whale if he doesn’t die in the upcoming battle.

Other terrible instances involve Captain Eye-patch and his wife.  There’s a small scene where Captain Eye-patch makes his wife cry because he’s an asshole and I literally threw my hands up in the air screaming, “WTF?!?!?”.  We were already given a reason not to like this guy because he hates his own life and disregards everyone elses.  Why would you even PUT THIS SCENE IN HERE?!?!

Ouni’s backstory and the Sand Festival are a mixed bag.  Ouni has so little facial expression that his backstory of being a orphan accepted by the “punk-gang” holds little weight.  The guy doesn’t even cry or show feelings for the death of his friends so I feel very little for his character.  The Sand Festival seems forced because it’s trying to be the emotional counter-balance to “these kids have to kill people tomorrow”, but I am so disinterested in the Mud Whale as a whole that I only semi-felt it’s significance.

To end on a good note, the art has come back into form.  This episode is beautiful to look at and I’m really happy about that.  The art is the only real redeeming feature of this show thus far.  The second piece I really like is how often Sami’s name comes up.  That girl is getting more development in death than she ever did in life.  I thought her confession to Chakuro in Episode 4 was handled nicely, I liked that Lykos remembered their brief interaction, and the fact that Chakuro talks to her spirit in the small moments of peace shows a bond of love that I can get behind.  The show has been neglecting to show meaningful relationships or character growth, and these sequences of remembering Sami permeate though multiple episodes, really sealing the feeling (hey that rhymes!) for me.  More of this please!  I’m concerned for how things are progressing though as Lykos seems to be making a move for Chakuro’s affections.  Cut that out show…

After the momentary peace of Episode 6, we are off to battle in Episode 7.  Clearly 4 days meant…now.  Gotta keep things moving at the speed of whiplash, eh show?

Children of the Whales is not great and every episode seems crammed to the gills with stuff…not necessary meaningful stuff, just…stuff.  I’m trying to absorb the good parts here at the halfway point, but overall I feel very little for almost everything on screen.  Here’s to hoping the second half answers the questions from the first half.  Please leave a comment if the manga is secretly waaaaay better than the show.  The world is interesting enough that I’d want to read a better written story set here.