Having no confidence in mounting a successful resistance to a floating island full of emotionless warriors with metal armor and gunpowder weaponry – only to then be faced with an entire country’s worth (assuming that their erstwhile homeland subscribes to the Zapp Branigan school of warfare), the council of elders decides to straight-up sink the Mud Whale and quit while they’re ahead (and before they’re, you know, just heads). Predictably, many of the younger inhabitants of the Whale are not enthused by this decision. Suou is the first to find out, when he is promoted to Chieftain and immediately given the task of actually sinking the Whale – he refuses (before anyone explains how exactly they expect him to do it), and coaxes some potentially helpful gibberish out of the council’s oldest member before he is knocked out and carried away by the Captain.

Neri, the council’s attendant, is present for the exchange and quickly excuses herself to seek help from Chakuro. She finds him, but only imparts her request after a strange force possess her and sends him on a vision trip, where he is encouraged by the spirits of acquaintances passed on. Chakuro recruits Lykos and a handful of his other friends, and they proceed to storm the bowels of the Mud Whale, where they begin to unravel its secret past…

At the risk of sounding redundant, this is a weirdly paced show. On the one hand, my recent viewing of Shirobako has significantly increased my sympathy for the trials of an anime studio attempting to produce a manga adaptation – trying to cram the story into 13 episodes seems like it’s taking its toll. On the other hand, several of the show’s other questionable aspects thus far seem like they were probably carried over from the source material.

Thankfully, De-Lion-dau doesn’t show up in this episode.

A brief aside: Escaflowne’s Dilandau was revealed to a psycho pretty early on, but I don’t think it was within a minute of his introduction (there’s less room in a thirteener, but this much less?), and he was definitely not a high-ranking officer in a military outfit that was very explicitly predicated on the removal of emotions from its soldiers. You can’t just throw some cat-eyed sadist front and center in the middle of that with no commentary by anyone and expect to be taken seriously. At least the Folken analogue might be doing something interesting, but you’re here to read about episode 4.

Have I not been paying attention, or has Captain Eye-patch here only been on screen for, like, five seconds, two episodes ago, prior to knocking Suou out cold and being all buddy-buddy with the Council of Elders? He’s apparently top dog in the Mud Whale’s security detail, but it looks like he knew about the Skylos before the attack and didn’t do anything about it. He’s an adult, but he’s Marked, so he can’t be that old. He seems unfazed by the suicide order, probably because he expected a mutiny and has no intention of stopping it, but he’s also perfectly content with gauging Ouni as a fighter rather than actually helping Chakuro & company in any way.

My guess? He’s hopped up on the Nous that the council keeps in the Mud Whale’s basement. It doesn’t explain everything, but it wouldn’t be the weirdest thing that’s happening down there, as Falaina seems to have Neri in its thrall or something. Hopefully the next episode will have some people actually talking to each other about what’s going on around here, because the countdown to Armageddon is rapidly draining my patience for all of the secret mystery stuff which might otherwise be kinda cool. Consider esteemed anime like Gargantia on the Verdurous Planet, which was a show of the same length but had the slice-of-fish-out-water thing going for, like, half of its run before rendezvousing with the over-plot. I suppose certain constraints on event ordering, mostly regarding the Nous Lykos, prevent similar exploration here. Ouni’s character trajectory in particular appears to be heavily dependent on the mini-massacre happening relatively soon after the encounter.

I guess the real question at this point is how long the next six days are going to last in screen time. We could be spending the majority of the show leading up to a climactic engagement, but I suspect that Loudmouth McFushiaHair will be back sooner rather than later – unless someone decides to try to steer the island/vessel instead of scuttling it so that, when the Skylos returns, the ol’ Mud Whale will be somewhere else – how good can their tracking systems be?

I did rather enjoy the trippy dream sequence (I am historically a sucker for them) – it starts you off with a couple of things that are, like, “mm, yes – symbolic” but throws a curve-ball or two in that are like, “wait – what?”

I’m also rapidly warming up to Ginshu. To those surprised by this given my history with imposed nicknames, something about the way it’s getting started in this show makes it seem like it might be an actual plot point, if a minor one. 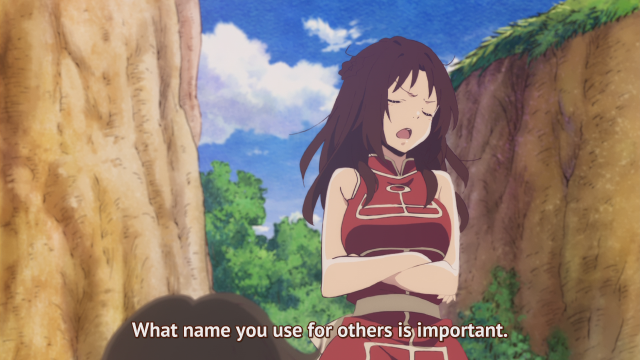 What I’m saying is that, for the time being, I’m holding out hope that the “Chakki” thing is an opportunity for character development, which is something that had no chance of happening in Amanchu because of the way the third episode was structured around Futaba accepting her whimsical nickname as an offering of friendship (also Hikari in general). Come on, Ginshu-nee-san! I believe in you!

Show better straighten up and fly right – having said that, there’s still plenty of potential here if it does.

2 comments on “Rolling Review – Children of the Whales (04)”