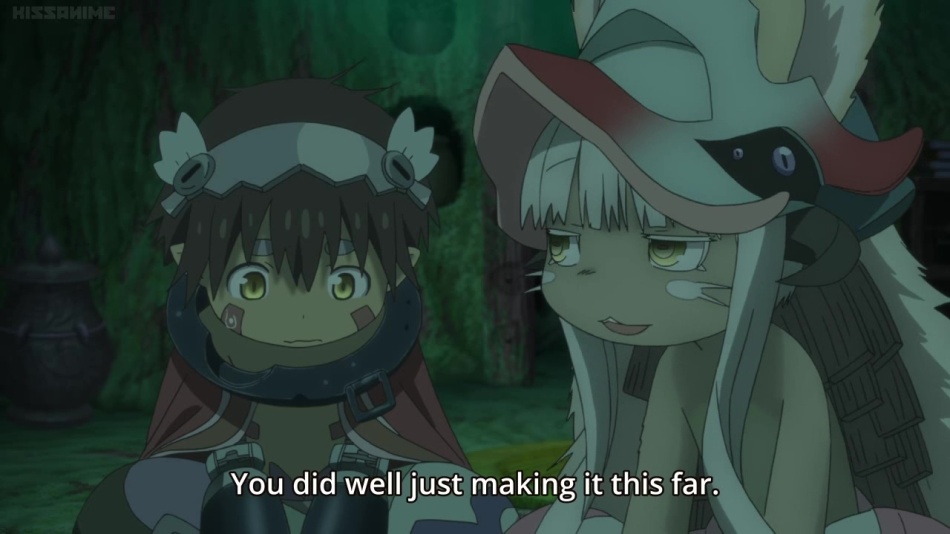 Riko spends another episode unconscious and recovering, making this a dialog-heavy episode primarily between Nanachi and Reg.  Oddly, we also spend a while back on the surface, as Leader tends to one of his small charges as they fight off a fever.  The episode ends with a fast-paced action sequence in which Reg saves a Black Whistle from the orbed-piercer, and gives him a message to deliver back to Leader that they’re still alive and pushing onward.

Sometimes I’m not really sure where this show is going, and the beginning of this episode is a prime example.  Back on the surface, Kiyui is fighting a deadly fever.

We spend the first few minutes watching Leader talk to a pharmacist from a trading fleet as they try to save him.  Leader goes quite in depth describing the “Birthday-Death Disease”, an increasingly prevalent illness that exclusively kills orphan children on their birthday.  As soon as Kiyui is brought to the trading fleet’s ship, he recovers almost immediately, leading to the unspoken conclusion that something about being near the Abyss is causing it. 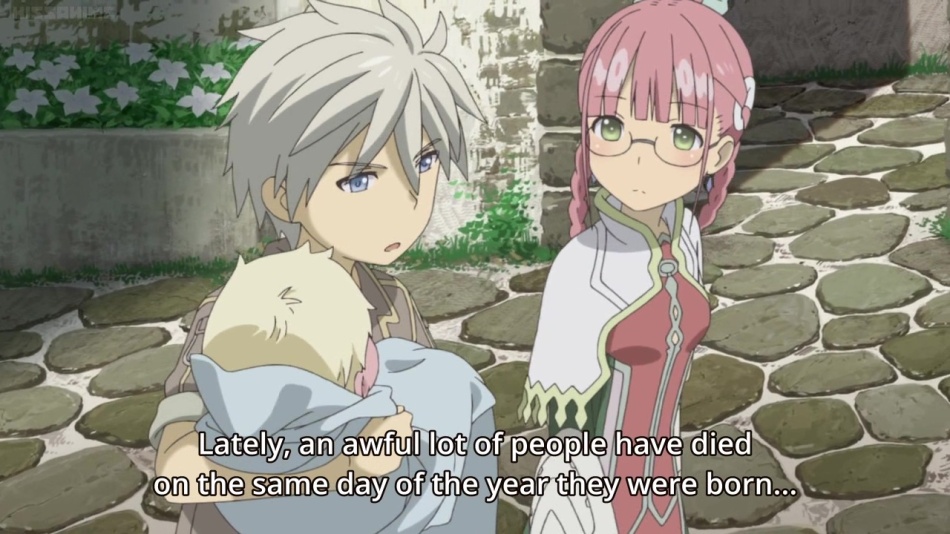 And then we cut away back to Reg, Riko, and Nanase without further explanation.  Now, I appreciate worldbuilding as much as (and to be fair, probably more than) the next guy, but it’s hard for me to understand why we had this sequence.  Unless Riko is going to mysteriously die on her birthday while deep in the Abyss (as opposed to dying from the multitude of horrors down there or from the random “maybe you’ll suddenly stop” effects of the Curse-Repelling Vessel), I can’t see what we gain from this other than a needless confirmation that humanity isn’t really welcome near the Abyss, and that life is especially unfair for people in this show.  Oh well, at least there was a shot of a really cool ship.

Seriously, that thing wouldn’t look out of place in a Miyazaki film.  Moving along, we’re treated to an explanation by Professor Nanachi as to how the Curse functions on a mechanical level.

Simple and effective, Professor!  The Curse is like an ever-increasing set of pieces of cloth that let you through easy but hurt when you push through them on the way up.  It’s apparently caused by the same force field that allows light to make it all the way from the surface to down here, and as with so many things in the Abyss, WHY WOULD YOU MAKE THAT?!?  Why.

Described as both looking like and having the texture of mud, it’s nutritious, filling, and almost completely unpalatable to poor Reg, who shoots a look at Nanachi that’s equal parts accusation and pity. 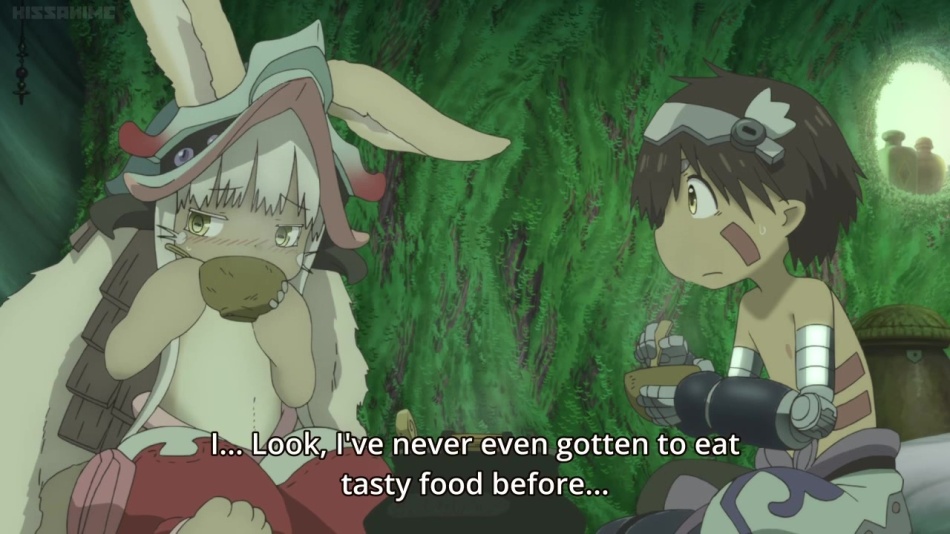 It’s one of those moments when you chuckle, but it’s tempered by the crushing knowledge that once Riko awakens, she and Reg will leave this oasis of safety and continue on to places of almost impossible danger.  So, good job making these scenes of levity feel precious, show. 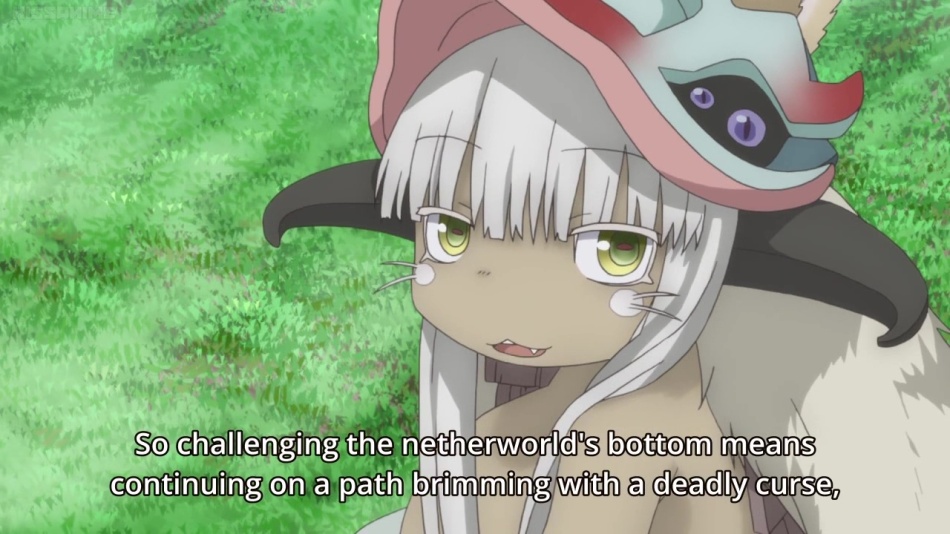 The show makes sure to maintain a sense of “everything is wrong just below the surface” with a shot of (what I assume is) Riko’s unconscious mind that is… quite unsettling. 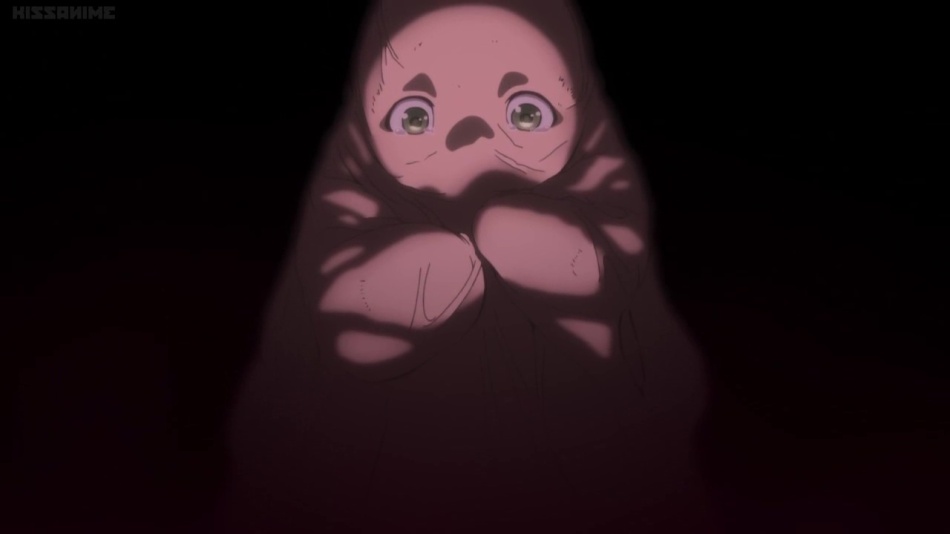 Yeesh, I don’t even know what I’m looking at and I’m unhappy.  They’re a talented bunch, the guys making this show.

The relatively easy-going episode ends with a shocking request from Nanachi to Reg, and a tiny flashback of Nanachi’s past that serves as a warning of what might lie ahead, clearing the way for a final episode that’s all downhill, both literally and figuratively.