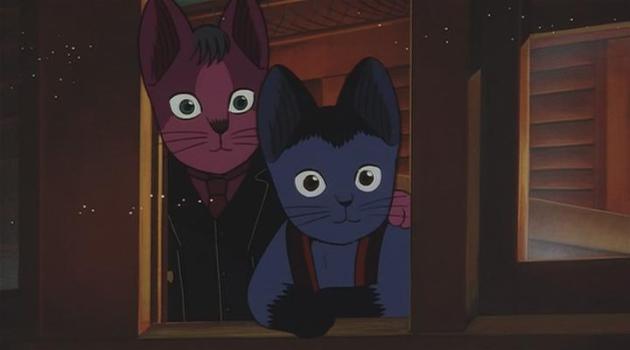 Giovanni lives on the outskirts of a small town, in a world where society is just beginning to industrialize. He attends what appears to be the equivalent of middle school, where several of his classmates mock him for middle school kinds of things, like the fact that his father is late from returning from his latest job in a faraway sea. Wandering on the night of a town festival, Giovanni boards a mysterious train, and is shortly joined by his only friend, Campanella. As the train traces an arc through the milky way, the boys observe slices of a wide and fantastic world, and ponder the nature of happiness.

Ladies and Gentlemen, allow me to introduce you to one of the most beautifully surreal films that I’ve ever experienced. Before I start getting into it, though, a little background may be in order.

Giovanni’s town seems incredibly quaint by today’s standards – its denizens get around its winding, stone pathways entirely on foot, and the only visible presence of electricity is in the lights and a single telephone. Though the movie was produced in the 1985, the story is not intentionally a period piece – it was originally published as a novel in the 1930s, after being compiled from drafts written in rural Japan somewhere around 1927 by poet and idealist Kenji Miyazawa. Kenji was tragically unappreciated in his own time, but has become one of Japan’s most enduring authors, with this story and others still in publication today. The book itself is seen in the anime Looking Up at the Half-Moon, and the concept of interstellar locomotives seems to have been a basis for several of the works of Leiji Matsumoto.

As an aside, there was a biographical anime special produced about Miyazawa in 1996 (to coincide with his hundredth birthday), which somehow managed to get released on DVD here in the states – under the title Spring and Chaos. Notably, both that feature and a recent adaptation of one of Miyazawa’s other works, The Life of Gusko Budori, carry on a trend that started with Night on the Galactic Railroad: casting the characters as anthropomorphic cats. I’m not sure that the original staff have given a concrete reason for this stylistic choice, but they actually managed to make the movie even more weird by keeping some passengers that board the train in the second half as regular humans.

And let me tell you, the movie was plenty weird before they showed up. Maybe not so much the first act, as it serves mainly to introduce us to Giovanni’s mundane life, but, once we’re on the train, all bets are off. The places that the boys see and the people that they meet are all half-remembered-dream levels of odd. The boys roll with every twist, though – and, honestly, if you find a featureless stairway descending into the void of space while looking around a deserted station while the train is making an extended stop, 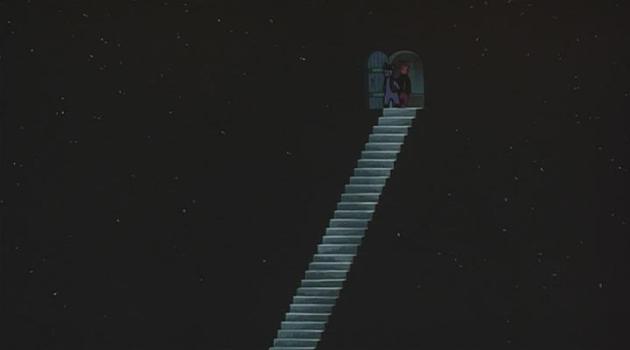 and you decide to go down that stairway, 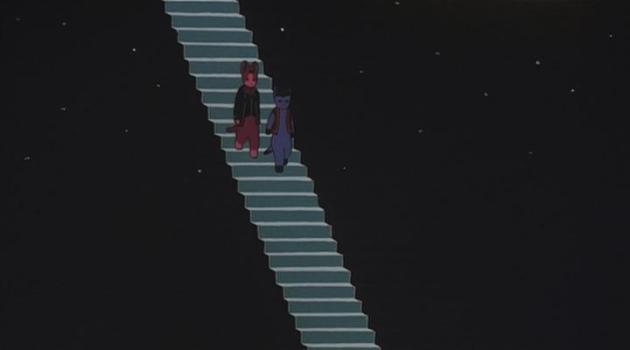 and it ends in a deserted version of your town, which has a sign saying “Pliocene Coast” pointing to a second featureless stairway that descends into the void of space, 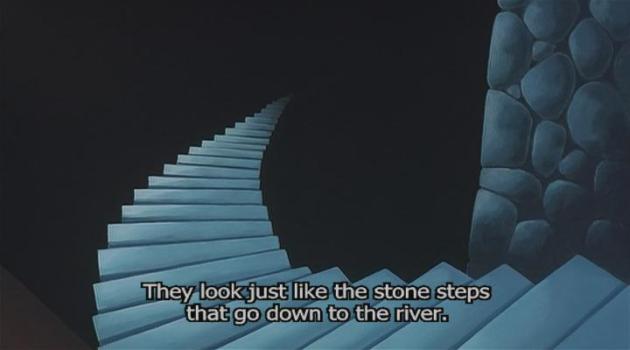 shoot – roll those dice again. I mean, what are the odds that you’re going to hit the bottom and walk out of a giant bone?

Let’s back up to the sign for a moment, which was helpfully translated by the characters from “La Pliocena Marbordo”. From even before the beginning of the movie, when the title card displays “Nokto de la Galaksia Fervojo”, all on-screen text save for the names in the opening credits appears to be some sort of mangled Romance language. It is, in fact, Esperanto – a language constructed by a Polish scholar in the late 1800s in the hopes of fostering a more easily accessible world-wide community. I think of it similarly to the common tongue in Dungeons and Dragons – it probably wouldn’t be your character’s first language, but the idea is for it to be everyone’s second (having humanity as a baseline in a fantasy world distorts the analogy, but one might argue that the Anglo-sphere today is becoming that analogue). Miyazawa was exactly the kind of person to see the merit in this idea, and the filmmakers chose to animate with Esperanto in homage to his work in the language. I think the choice was more than perfect, as it adds to the movie’s halfway-real atmosphere.

Another element of the movie that contributes to its dream-like aesthetic is the background design in general. Everything has a texture to it, but looks just a little too well-defined. Walls and walking paths often seem too smooth and too uniform; trees are too sparse, and too regimented or too bulbous. 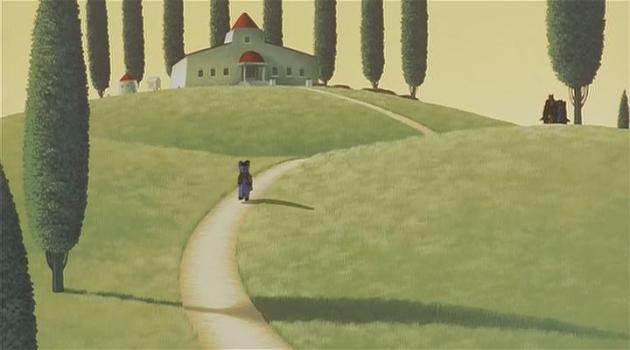 The artificiality of it really solidified in me the impression that this universe exists solely for the presentation of this story.

Now, I’ve done some reading on the subject (though I haven’t actually read the entire original story), and some of the excerpts that I’ve seen suggest allegories that I’m not sure made it into the film. This may partially be due to translation – it’s a little unclear in the movie subtitles what the deal is with the paleontologists that the boys find on the aforementioned Pliocene coast, but another translation I’ve seen casts them as gathering evidence to convince doubters that the fossil record is indeed millions of years old, and not the merely the work of random erosion.

Miyazawa didn’t let his belief in science and progress stop him from being a man of faith, though – a conversation that didn’t make it into the film involves Giovanni and a couple of the characters who weren’t adapted as cats discussing the nature of God. Those characters are on their way to the Southern Cross, also known as the constellation Crux, which is rendered as a Christian holy site, similar to how the Northern Cross, a subset of the constellation Cygnus, is rendered earlier in the movie. Christianity is curiously prominent in Night on the Galactic Railroad, considering that Miyazawa was a devout Buddhist, but this is likely due to his interest in the work of Dominican friar Tommaso Campanella, whose family name and Christened name, Giovanni, are bestowed upon the main characters. Notably, Tommaso was a defender of Galileo, which seems to inform the scene with the paleontologists well as the astronomical setting of the story in general.

Thinking back, there were only a handful of stellar phenomena rendered as locations in the movie, but I’ve still got to give mention to the depiction of Albiero. Without getting too technical, Albiero appears to be a binary star system with a larger gold star and a smaller blue star. When the train passes by what one character refers to as “the observatory at Albeiro”, the boys peer out into the darkness to behold an enormous cylindrical tower rising out a contiguous mass of adobe-like structure. At the peak of the tower’s slightly curved top rotates a pair of lights – one bright gold, the other a slightly dimmer blue. The boys look in hushed awe as the mighty pillar gradually recedes into the night, slowly blinking: gold, blue, gold, blue.

[This one you’re gonna have to take my word on, since the scene is too dark to put a frame here and have anything in it be visible. It’s so cool, though, you guys – you’ve gotta see it]

I am a huge sucker for long, quiet shots like that one, and Night on the Galactic Railroad is full of them. The atmosphere of wonder in this movie is so thick I can swim through it. It may actually be a little overboard, particularly in the first act, where a friend of mine was somewhat put off by a pair of scenes with slow rises in audio intensity that sort of fizzle out. On the subject of watching with other people: be careful who you go in with – nothing makes a movie feel like an eternity (and, at just under two hours, this one is actually pretty average – it’s just slow) more than when you start wondering what everybody else is thinking, especially if you’ve already seen it (but maybe that’s just me). Theoretically, this is a children’s movie, but you may be hard-pressed to find any kids with the attention span to appreciate it.

I would personally recommend this movie to anyone, although I suppose I should qualify that by saying that if you’re the kind of person that wants their media to get to the point, you may be better off reading the novella. There’s a sort of “greater good” morality fable near the end, if, like me, you’re really bad at reading into symbolism and subtext, and it’s prompted me to dig deeper in a way that very few other works have. It’s an amazingly rich film, and I hope you enjoy it.

Night on the Galactic Railroad has been graciously re-released on DVD and Blu-Ray by Discotek Media.
There are a few copies of Spring and Chaos kicking around on the used market, and, if you feel like braving the dub, it’s somehow still available in six 10-12 minute chunks deep within Tokyopop’s Youtube channel.

0 comments on “Night on the Galactic Railroad”