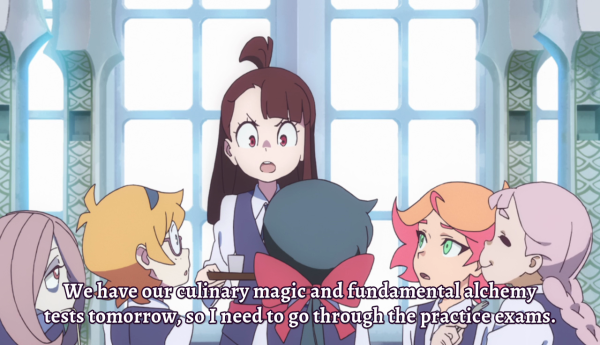 After recognizing that her dreams will only come true through hard work, Akko doubles down on her studies. Unfortunately, her weak and unpredictable magic causes no end of problems during Luna Nova’s magical exams. When she takes out her frustration on other students, she’s given an ultimatum; pass her final exam, or be expelled. When her attempts to impress her piscine professor causes even more trouble, she must use her unreliable magic to save both the professor and her chances of remaining at the academy.

Due to unexpected complications, Dan will be filling in for Brendan this week.

Following the remarkably moving climax of episode 6, LWA takes things a bit easier this time around as we follow Akko through her intensified studies. It’s nice to see her taking the lessons from the Fountain of Polaris seriously, though the results leave a lot to be desired.

By this point, I’ve begun to find Akko’s total magical incompetence a bit grating, though the show’s comedic timing do a lot to sooth the irritation. As if to answer Su’s wish from last episode’s review, Professor Ursula joins in to try and encourage Akko and help her with practice. Despite serious setbacks, Akko is showing signs of improvement. That doesn’t stop Diana’s two hangers-on, Hannah and Barbara, from mocking her ceaselessly. Finally, Akko has enough and decides to respond with good old fashioned violence.

This leaves her on the verge of being expelled from Luna Nova, with just one chance to pass her final elective exam or be kicked to the curb. The exam is in magical philosophy, and there doesn’t appear to be any professor in the class. I’ll let Akko explain.

Well, sucks to be Akko. Being who she is, she manages to screw things up even harder, losing Professor Pisces. She, Sucy and Lotte go on a quick adventure outside the school to rescue the professor, where Akko is forced to make a hard decision on how to use her magic. Meanwhile, poor Ursula is left desperately trying to cover for her pupil’s screwup.

The real drama, however, happens when Akko returns to the school. The faculty are ready to kick her out on the spot, not just for her actions, but for being an embarrassment to the school. Finally, Ursula has had all she can take and mounts an impassioned defense of her student.

Like Akko’s visions of Chariot, I was genuinely moved by Ursula’s words. They may be simplistic, but they’re also sincere, and exactly what I’d like struggling students to hear. While Ursula’s speech alone isn’t what saves Akko’s bacon in the end, it’s still a great takeaway from an otherwise decent episode.

Despite being pretty light on serious story, episode 7 shows us Akko’s newfound appreciation for studying and finally brings Ursula closer to the fore. There’s plenty of snappy dialogue and funny sight gags to keep you smiling through, as well. With just over a quarter of the show down, we’ve established our major characters, hit on some strong themes, and set up a few solid plot hooks for the future. Little Witch Academia continues to deliver.