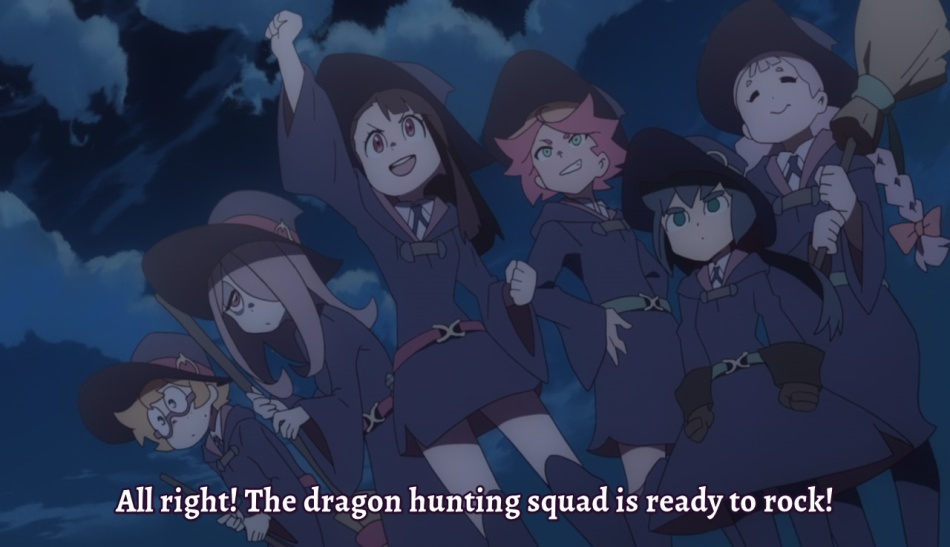 The Sorcerer’s Stone is a magical item that allows Luna Nova witches to use magic on the school grounds. On a punishment assignment,  Amanda and Akko witness a group of dragons stealing the Sorcerer’s Stone and flying off to some mysterious forest. Fueled by the ridicule of Diana Cavendish, Akko prods Lotte, Suzy, Amanda, Constance, and Jasminka into going after the dragons and retrieving the stone.

Do you want to know what makes magic even more awesome than it already is?

Do you want to know what makes everything more awesome?

This week’s episode brings the gang from LWA: Enchanted Parade back into action, on a quest to bring back the Sorcerers stone. The episode is certainly fun, but what I liked most about it was its little worldbuilding tidbits. Also Diana…because I love Diana and her endless snood.

I’ll start with the nice little note regarding dragons and the secret forest Akko and Co. travel to in an attempt to retrieve the Sorcerer’s Stone. The world we’ve come to know is really just Luna Nova, the town close to it.  Slowly, we have begun to learn more places.  There’s the crazy forest of doom from Episode 1.  Episode 3 brought us to “The City” for Lotte’s big event, and this episode drags us away from school to a dark forest where dragons dwell. It’s awesome that the world Trigger is building now feels…populated. We got a little taste of the mystical creatures that exist in Episode 2 (Butterflies of Hope, HECK YES!) and now we have even more (Dragons!  Wooo!).

The second thing that was fun to see was the sheer amount of things that Luna Nova relies on magic for.  There’s everything from cleaning, to moving around the school, to package moving, to…toilets?!  It all made Luna Nova feel so real and well thought out.  Kudos to Trigger for taking the time to think through how the school works and how difficult life is without the sprites (those little troll guys) and magic.

There’s also a sequence late in the episode where Diana reads ancient Draconian. I’m not sure if Trigger just threw a bunch of random symbols on a page, but the fact that they went through the trouble of creating a piece of art that references a language was a gesture I greatly appreciated. It really made the dragons feel like they have been a part of this world for a long time, just by giving them a piece of cultural detail like language. 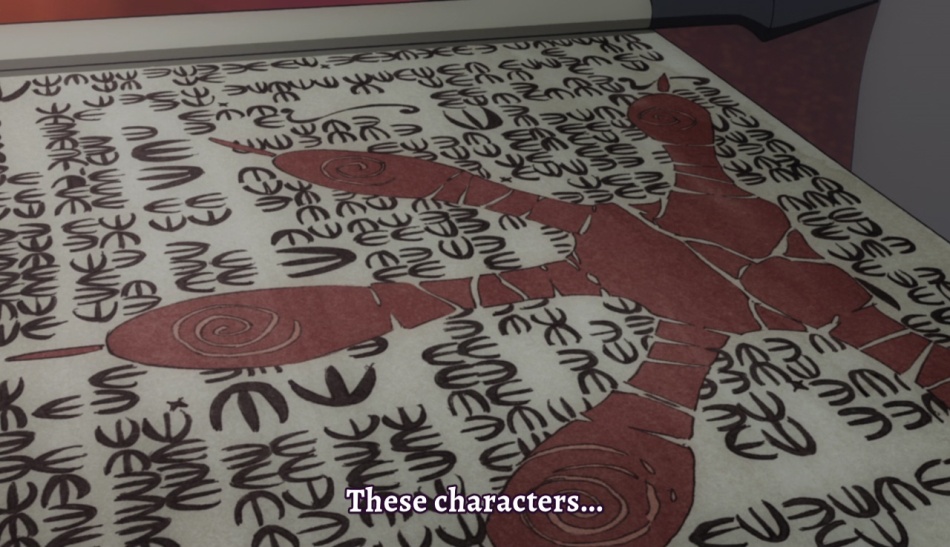 If you attended Genericon last year (2016), and went to the “It Came Out of Nowhere: Good Anime” panel that we put on, you’ll know that I discussed Little Witch Academia and Enchanted Parade. One of the compliments I gave Enchanted Parade was that it expanded out the setting, not just the world. The parade that the trouble-maker team (all the people mentioned in the synopsis of this episode) is tasked to put on has traditionally just been a method for bullying witches, as it seems society knows about them but still considers them freaks.

This time around we get verbal tidbits about how magic is effectively losing its popularity and about how science and business are creeping in to take its place. This is an obvious play at the fact that we as people stare at numbers, computers and cell phones all day and could use a little more, “magic” in our lives (subsititute “going outside” or “talking to people” for “magic”). It forces us to realize that while Akko is definitely an odd duckling, she’s not just odd in school. Her belief that magic makes people happy is odd TO THE WORLD, and that in and of itself is a powerful statement about what’s happening in the setting. 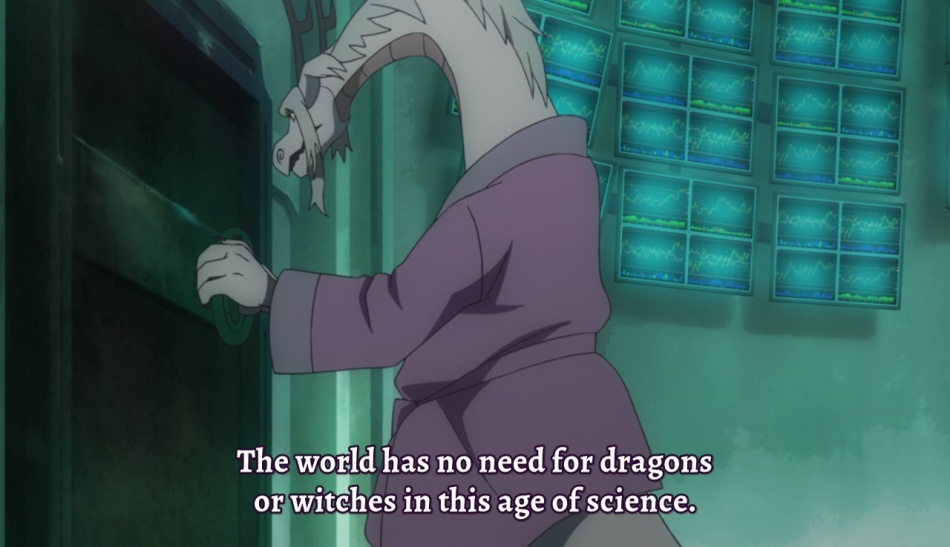 People are forgetting magic, what it means, and why it’s special. We were also tipped off by a cynical statement made by Ursula-sensei in one of the earlier episodes that the whole concept of believing and happiness is a thing long suppressed by even the people who brought joy through magic once upon a time. If you haven’t seen the original LWA and LWA: Enchanted Parade that’s a bit spoilery but I want everyone to go out there and watch this, so think of it as a nudge to check out the original two works.

There’s twist at the end of this episode regarding why the Sorcerer’s Stone was stolen, but I won’t reveal it here. Suffice to say that it’s not quite what you think and in a way, it may weaken the episode for you. Trigger sacrifices a cool “quest with dragons” for an expansion of the world’s mindset. I still love LWA though and I’m looking forward to Akko’s continuous adventures in “making the world love magic again”.  I guess if you were hoping for a standard quest episode, you’re not going to find it here.  Then again, when the heck has Trigger ever been “standard”?

The art remains as strong as ever and despite the weird twist, there are some rad battles with dragons. Akko and Co. pull out some fun magic moves and everything plays out in slick style with great choreography.

Episode 5 is an odd duck, much like Akko herself. What starts off as an adventure with dragons, turns into a lesson about the state of the world. It’s a fun ride though and it has some great action sequences. Here’s to hoping all the episodes have this much heart.  Also, I didn’t clip the pictures here but there’s a cute little nod to Powerpuff Girls which I found entertaining.  Be on the lookout for it! 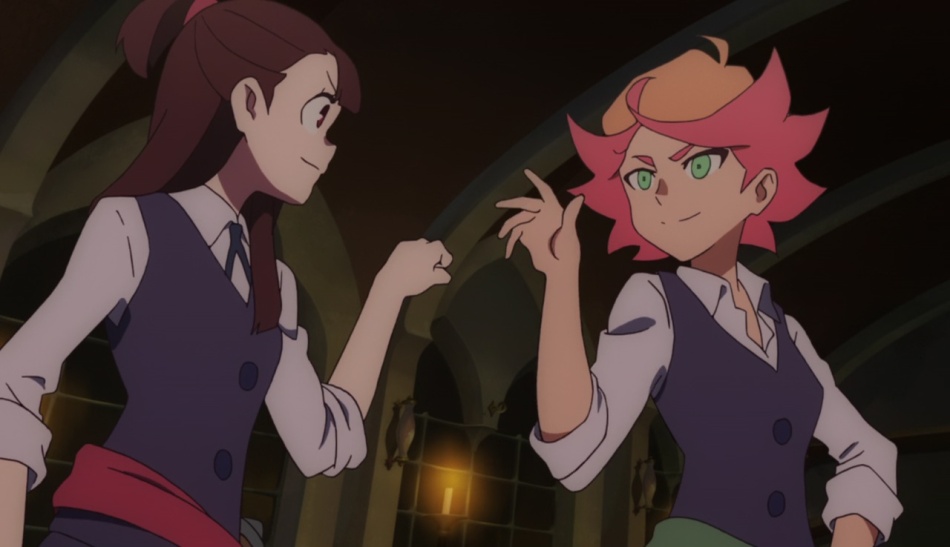