In another double-vignette episode, we first follow the Ninomiya twins as Makoto laments his sister’s violent tendencies. A romantic misunderstanding only complicates matters, and the pattern of sibling abuse continues unabated. Later on, the viewpoint switches to Hikari and Futaba as the latter struggles through a physical fitness test. Futaba’s lack of athleticism and self-confidence is holding her back, but Hikari thinks there may be more to it.

Amanchu! has fallen into something of a pattern with these two-part episodes, which I sincerely hope doesn’t become a rut. The paired short stories offer nicely structured glimpses into the different characters, but it just doesn’t feel like much of anything is happening. This is especially true when half of episode 8 is taken up by the relationship between the Ninomiya siblings.

Ai is terrible. Brendan has already given a thorough account of his loathing for this character, so there’s not much that I can add at this point. What little humanity and sisterly affection she displays during this episode is immediately overshadowed by the casual violence she inflicts on her brother. I know Amanchu! isn’t super-serious as a whole, but the unfunny slapstick bits just drag down what is otherwise a lighthearted teen drama. It really does feel like Ai barged in from a different show and everyone is too afraid to ask her to leave. 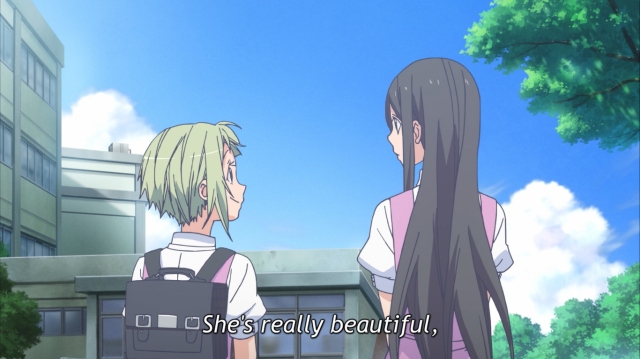 Back over in our main plot, Hikari and Futaba’s relationship is starting to become a bit deeper than simple friendship. The show’s been very careful to dance around any hints of romance between the two, but it is beginning to stand out clearly. Most of what we see in this episode’s second half is Hikari’s internal monologue about how she sees Futaba; elegant and beautiful, but timid and prone to self-doubt. 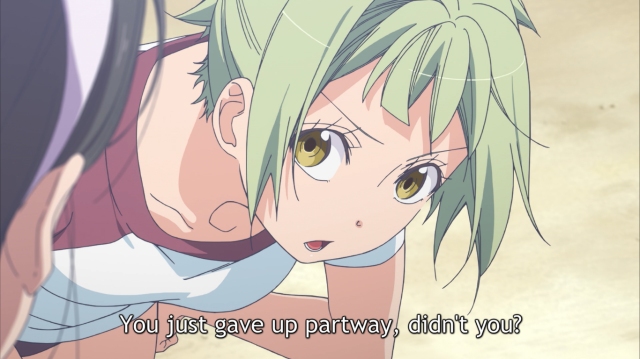 Earlier, Hikari saw how close Futaba came to giving up on diving because of her fears. This time around, she sees her friend failing spectacularly at all manner of athletic trials and blaming it on her own lack of strength and stamina. However, Hikari says that she thinks it’s because Futaba hates to lose. When she thinks she’s outmatched, she simply shuts down and refuses to compete, rather than pushing herself and risking failure anyway. With Hikari encouraging or just staying by her side, Futaba is able to perform much better, and Hikari is happy to have learned more about her friend.

What I like about this is that we get to see Futaba from an outside perspective. A lot of shows like to put us in the character’s heads and give us their internal monologues or have them simply blurt out their philosophies and insecurities aloud. Amachu! opts to have characters describe how they see each other, which feels more natural and refreshing. It’s a welcome change of viewpoint, and it helps make the characters feel more important to one another’s development. I think it helps the show stand out, and provides some of its most enjoyable moments, when Hikari and Futaba open up to each other about how they see each other.

The first half of episode 8 was pretty disposable, and if Ai and her brother never showed up again, I wouldn’t be sad. Even so, the second half was an enjoyable look into Hikari and Futaba’s relationship which demonstrated how they really do complete each other. One gives the other’s boundless energy focus, and other other gives her friend encouragement and strength. At this point, Hikari has been giving the lion’s share of support, but I hope to see Futaba stepping up more in the future.

Maybe then we can actually get back to diving? Anytime you’re ready, show.