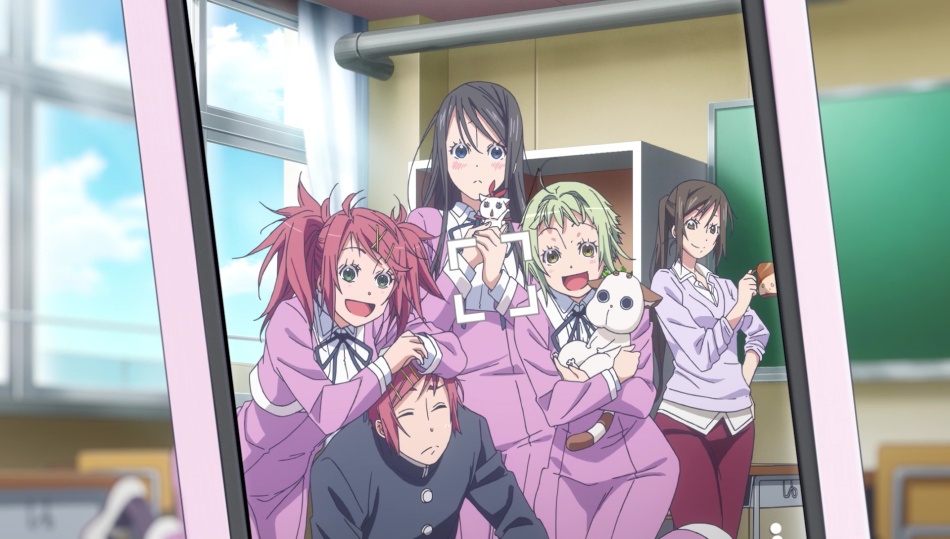 At a small shack near the ocean a first year high schooler named Hikari Kohinata goes diving. A few minutes later a beautiful girl on a scooter stops by the ocean to take pictures. They don’t know it yet but these girls are going to meet and the first day of high school is going to be all sorts of fun!

Even though this is Episode 1, I can make a statement about this entire show. Amanchu! is 189 billion percent NOT Concrete Revolutio. This show is incredibly gentle and just wants you to relax. Brought to us by Kozue Amano of Aria fame, it’s easy to see that this show is gonna be a chillfest.

The first episode is very slow. We meet Hikari and come to understand her love of the ocean (and pork soup). We also meet the painfully shy Futaba Ooki. She’s recently moved to the area and there’s a sense of loss in her, as she constantly checks her phone for messages and keeps looking at photos of her middle school friends. She and Hikari meet and discover that they are in the same class.  I’m excited to see how Futaba learns to make friends and come out of her hardened shell.

It’s here we establish character types. Hikari has enough optimism to power the sun and absolutely LOVES diving and the ocean. Futaba is so shy that she might as well be part of the wall. It’s clear from this episode that they are going to hang out and have the ultimate high school experience. After all, how can you argue with Fun being Might, Fun being Right, and Fun being Infinite! 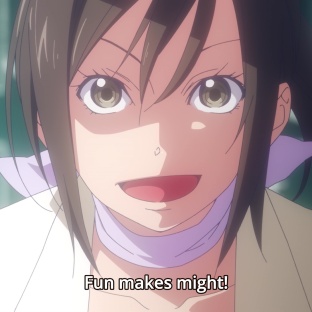 Amanchu! is a beautiful show. Amano’s manga art is legendary and as much as I loved what I saw of Aria, the anime didn’t have nearly the same splendor. Amanchu’s art is glossy and flowing. Shots of school, the ocean and heck, the blackboard when the girl’s walk into their homeroom are all lovingly rendered.

If I have any complaint about Episode 1 it’s that Hikari spends 90% of the episode in “muppet mode”. In Aria the characters would often go into a silly chibi face mode when they were “mad” and it made for a nice laugh. Having one of your characters constantly in it really ruins the effect.

There’s little to say about Amanchu! Episode 1 as it is as slow and gentle as they come. It’s taking it’s time for now but it looks like episode 2 is going to…jump right in….Yeah I just went there.  In other news…those weird cat things from Aria are back.  Huzzah!