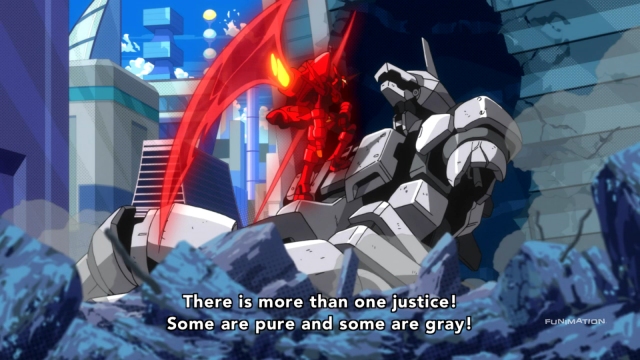 With Master Ultima dead and his aquatic city taken over by Emi’s legion of supernatural monsters, Japan’s superhumans and the Imperial Ad Agency move in to crush the uprising. Jiro infuses Equus with his overwhelming power and devastates the attackers, until Kikko and Jaguar are able to subdue him. The battle carries on as Jaguar, Kikko, Emi and Fuurouta come to blows.

As the struggle escalates, Satomi reveals his own power and intent to wipe the world clean of all superhumans, monster or otherwise. The remaining bureau members band together to face their true foe, and Jiro, still willing to believe in a world where superhumans fight for justice, defeats Satomi, but is destroyed in the process. The release of energy from Satomi’s death opens a doorway to an unknown world into which Emi and her people retreat, leaving the remaining superhumans and the Bureau to an uncertain but hopeful future.

Just like it was in the first season, the finale of Concrete Revolutio is a whirlwind of plot threads, character motivations and superhuman vs. superhuman punch-ups. This last episode valiantly attempts to put to rest the entire convoluted struggle between regular humans, superhumans and monsters. While I think it succeeds overall, there’s just so much happening that I honestly can’t say how many of the countless sub-plots and tangents actually get resolved. My head is still spinning as I try to tie the events together.

The shows trademark lunacy is omnipresent, with all of the wacky monsters and superhumans we’ve met up until now duking it out with magic, space technology and whatnot. Kikko summons a giant soft-serve ice cream cone to douse Jiro’s powers while Jaguar assaults him with an army of merging time-paradox robots. It’s a lot to keep track of and the quality of the fights is choppy,  but I’m pretty sure no one’s going to read that last sentence and say, “Nah, that sounds boring.”

On the positive side, I greatly enjoyed the final philosophical decision made by Jiro, and how it concludes his long struggle over taking sides between superhumans and mortals. At first, he’s willing to become the most powerful beast of all in order to redeem superhumans in the eyes of the world, only to realize that his true purpose is to defeat Satomi. The fight between the two of them is a well-crafted beatdown, and features one of the better impact blows I’ve seen since One Punch Man. Trust me, you’ll know it when you see it.

Jiro’s evolution from a naive but earnest youth to a man uncertain about his place in the world has been the core that holds the rest of the show together, and it’s good to see that getting plenty of attention in the finale. Watching this nuclear explosion in the shape of a boy finally take a firm stand is satisfying, even if the circumstances leading up to it are baffling and twisted in the extreme. It was stated early in the first season that all superhumans have an evil counterpart that they must battle – a concept that didn’t get all that much play between the social commentary and politicking. In this case, the parallel is actually quite clear, as Satomi reveals that like Jiro, he was the product of what should have been a devastating release of energy (in his case, a Tunguska-like meteor impact). So you have an quixotic young man born from an atomic blast fighting an older, selfish man created by an astronomical disaster. It’s pretty rad, even if it doesn’t make a lot of sense.

While the fight between Jiro, Satomi and the members of the Bureau is nicely handled, I’m not sure I can say the same for the rest of the episode. Much like the events of the previous season’s endgame, the episode felt rushed, with side-characters getting little more than a few seconds to resolve their various differences. I suppose it’s to be expected with so, SO many characters on stage and the craziness that accompanies them, but I wish they had taken the time to stretch the final battle over two episodes to give everyone a bit more breathing room.

Once all of the fighting is done and the show cuts ahead a few more years, it’s able to take things a little easier. With all of the major conflicts over, Fuurouta and Kikko reminisce and explain that after the great battle, superhumans have largely disappeared from the world. They are still represented in toys, movies and manga, but with monsters, beasts and villains essentially absent, most of them have faded away or assimilated into society. In spite of that, some still use their powers surreptitiously for good, and greater threats loom on the horizon to bring them back into the spotlight. It’s a nice denouement that acknowledges the madness that came before and shows how our characters have grown, becoming more mature but still embracing their roles as fantastical heroes in subtler ways.

The final episode of Concrete Revolutio is a ton of convoluted plotlines all fighting for attention, complete earnest-if-campy dialog and a blast of technicolor madness. Its good points are the same as its predecessors, with engaging characters and a willingness to play its absurdity straight in an homage to Japanese entertainment of the mid-late 20th century. Its flaws are also the series’ flaws – too many plots getting twisted and resolved in a huge rush and a reliance on tropes from a time period so firmly rooted in Japanese pop-culture zeitgeist as to be nearly impenetrable to an outsider.

Now that it’s over, I find it hard to come to a firm conclusion on Concrete Revolutio. I certainly enjoyed the show, and it revitalized my interest in a lot of older manga and anime, so if that’s what you’re looking for, go nuts. The bold visuals and retro aesthetic are like nothing else out there, so the show is incredibly distinct and memorable. On the other hand, the constant harangues about justice, peace and freedom can undermine the more personal moments, and with so many characters competing for your attention, it can be hard to latch onto any of them. I can recommend Concrete Revolutio for those willing to put in the mental energy to keep track of it and those with a soft spot for the older anime and manga fare. Give it a shot, just don’t expect it all to make a ton of sense!